Flyting is a ritual, poetic exchange of insults practiced mainly between the 5th and 16th centuries.
Submitted by Apartment 18 Productions — 1 day, 8 hours before the deadline
Add to collection 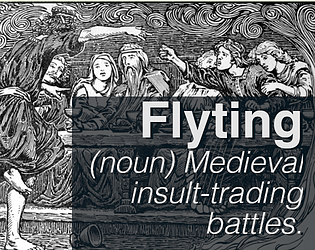 I didn't quite understood how to play it but i might be dumb, english is not my first language so speaking the medieval way might have confused me a bit idk. I just didn't kenw what to type :S everything i typed went wrong lol.

Thx for playing. Text adventures can be really hard, they aren't very intuitive from a UI perspective.

Initially, you can [verb] [noun] (aka GO EAST or TALK BARTENDER).

Once a flyte battle is initiated (aka FLYTE GUARD), the format switches to [noun] [verb] [adjective(optional)] [insult] (aka FATHER LOOKS STUPID DWARF, which the game will translate as "Thy father appeareth like a fat-kidneyed dwarf!")

Hope this helps & thanks again for playing.

Had  a lot of fun trying to come up with creative insults in old english, that's a fun concept for sure.

Thou art most welcome.

Super creative take on the them! Text based adventured are always super fun and what a fun very specific period piece as well! hahaIt may appeareth that my burns were not sicketh enough, but it was fun acclimating myself to the syntax of the game and how it works. The music was also really well made and very appropriate! Great Job!

The more you play and level up your flyte skill, the sicker thy burns become!

Absolutely amazing take on the theme. I love this game, even though Ive not quite grasped how to play it haha

Thx for the kind words & giving the game a shot. Text adventures are hard for players and extremely limited in their ability (especially for a game jam coding one from scratch in a week!).

Initially, you can [verb] [noun] (aka GO EAST or TALK BARTENDER).

Once a flyte battle is initiated (aka FLYTE GUARD), the format switches to [noun] [verb] [adjective(optional)] [insult] (aka FATHER LOOKS STUPID DWARF, which the game will translate as "Thy father appeareth like a fat-kidneyed dwarf!")

Hope this helps & thanks again for playing.

I'm sure this is great but I just didn't get it! I've never played a text adventure before that I can remember. I tried typing in some things similar / the same as what what the guard said to me and it just told me "blah blah blah" and something about drivel. There's a great idea in here - I know it, but I just couldn't figure out how to get it to work for me. Maybe a future version could have more explicit instructions?

Thx for trying it out.

Text adventures are hard and extremely limited. The player input has to follow a specific format. Initially in the game it's [verb] [noun]. Once you initiate a flyte battle (aka FLYTE GUARD or FLYTE BARTENDER) then the format switches to: [noun] [verb] [adjective(optional)] [insult] (aka MOTHER SMELLS STINKY GOBLIN, which the game will return as "Thy mother smelleth like a refulgent goblin!").

I tried my best to put in enough prompts in the game so this would be intuitive for players. But again, especially for those not familiar with the genre, it can be very confusing to play until you get the format down.

Nice to see a more narrative game here. I found the music super loud and a bit cracking on Google Chrome desktop – I think exporting with "Threads" instead of "Regular" solves the issue :)

Thx for the kind words. I have an updated version I'm working on to solve this and other music-related issues with the game. Learning Godot is fun.