An arena FPS with lots of shooting and lots of dice
Submitted by Sean Noonan (@SeanNoonan), MrTapa (@mrtapa) — 26 minutes, 10 seconds before the deadline
Add to collection 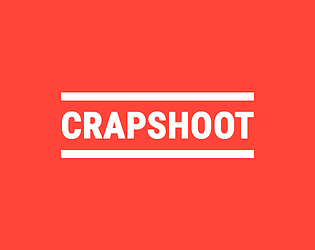 very addicting to try and max out all the stats. though there's not too much progression, i had a fun time playing!

Yeah, progression was hampered by the fact that navmesh was broken in the shipping build :(

Really interesting concepts that, I would say, need a bit of polish to make them more understandable to the player. During my time playing, I was confused about the controls but slowly started understand how to play and what to do. Seet also made good points on the dice upgrade system. Overall not a bad game, but needs more polish. Keep up the good ideas!!

Yeah, we just had zero polish time. After a number of crashes occurring close to the deadline, we really had to scramble to get anything playable and tested.

Hi, I'm quite confused on the mechanics. Everytime I press F to roll, it shows the dice 1 & 2 and I assign whatever stats I want. But I'm not sure what number I'm even rolling every time. Am I rolling 1 & 2 all the time? Or am I always rolling both 1's as shown on top of my UI. I played the game 3 times and I don't know whether or not I unlocked any of the perks. Anyway apart from all that, I like the concept and the variety in enemies.

Yeah, I agree that using 2D dice on the menu, driving 3D dice in the world was a little confusing - I've got a potential solution for that in the post jam update. Same goes for the rolls themselves, we definitely didn't make it clear enough. Perks are only ever rolled on doubles (and they're temporary), so there's a good chance you didn't get one!

First game I've seen in Unreal! I'll say I got frustrated by the upgrade mechanics, but props to you for not making it RNG-based. Good job!

Thanks for playing! It would be really helpful if you could elaborate on those frustrations around the upgrade mechanics :)

This is gonna sound like I'm complaining, but honestly these are just minor setbacks. Overall, I really enjoyed the shooter. I also understand that there isn't a whole lot of time to think about little things like this during the jam, and there's so many other things that are actually needed to have in the game before you can get to this sort of thing. That said, if you want to know how you could improve the game in post, here's a list of things I noticed:

There's some trouble where the dice result won't register in some cases, but I assume that's a bug.

The dice seem to default to spinning on the up-axis, so the top result is ususally low, unless I've aimed the camera in a way that makes them bounce off a wall to spin differently. Of course, I really have no idea if that's actually how the rolling operates; the rotation could actually be RNG based, and I could just be getting unlucky. Just an observation.

While the score depletion mechanic (where the scores naturally return to their original number) does keep the player from getting overpowered, it isn't really satisfying and makes my investment feel meaningless, particularly in weaker stats like accuracy. An alternative could be to make the enemies get more powerful as you upgrade, create enemies that actively deplete your scores instead of dealing damage, or even just having less depletion for less powerful stats.

Really interesting game. However the upgrade system is not very intuitive, probably a better description on how it works would help. Also the fact that the enemies in the starting are respawn in like 5 seconds gave me absolutely no time to think about upgrades or anything.

Good feedback! Thanks for playing :)

Incredibly fun game! I would absolutely play a "full game" like this, with different arenas, waves, etc. As someone else mentioned, the upgrading was confusing at first (my biggest confusion was that the game lets you "roll" with only 1 die, but that seems to just reset the "Accuracy" stat, regardless of what you put the die into), but once you understand it you can very quickly get a build going that demolishes the enemies.

Yeah, the single dice being locked to accuracy was a bug we didn't get to fix in time for submission :(

Thanks for playing though!

The gameplay itself was fun! kinda similiar to many games out there but the dice concept in it helped alot! loved how chaotic it was

Glad you liked it, thanks for playing!

Fun to play. I was a little confused on how the upgrades system work though. Spots that you click meant you wouldn't get an upgrade there?

The opposite, you choose which stats you want to upgrade. That's good feedback for the UI in a post jam release. Thanks for playing!