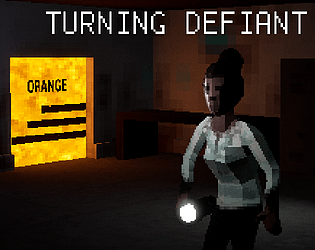 How does your game fit the theme?
A science experiment gone wrong, causing the patient to become out of control

I played this with someone and as the scientist I had great fun running around, trying to get keys and getting lost. Sadly as the ghost he had a less enjoyable time as he was either running behind me at the same speed, or just waiting around a corner for me to run into him. Perhaps giving the ghost more to do if there are less scientists would be something to concider?

The game looks and sounds great, although I did notice that once I got the warning sound at a certain point is stopped getting louder, so I walked around a corner into the ghost (which made me jump and made both of us laugh a lot). A really good prototype, I hope you continue to develop this as it was really good and shows awesome potential

The ghost here: This was great fun but yea, as a ghost, at least with only one scientist, there is not that much to do so I feel like there should be something that either the scientist or ghost can do to make it more interesting. It also feels a little overpowered that I could just press shift anywhere ans instantly know where the scientist was.

Thanks for playing, guys! It's good to hear that some people actually got to play it. We were having trouble balancing the game since there were only 2 of us and we couldn't really get that much testing in. The "ghost vision" was a bit of a last minute thing and I think takes away from the experience as a whole because it just means as you said, they can wait around corners and get the scientists too easily. If we made a second revision, tweaking the ghost/scientist interaction would be one of the first things we'd do. Thanks for the feedback and thanks for playing!

It looks like it would be Fun to play with friends.

looks pretty solid for what i THINK it is, not much game here for someone just loading it by themself though, can you explain to me what the goal here is?

Sure! The aim of the game is for the Scientists to search the level to find key cards to open doors and to find their way to the exit before the Ghost gets them! I'll add this to the description of the game!