Help ElJay and Niknak save thier ranch .
Submitted by GGladam — 6 days, 21 hours before the deadline
Add to collection 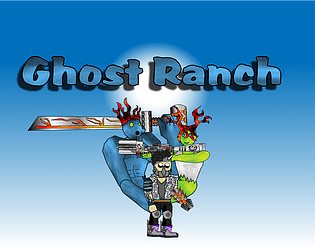 Vile Alliance (Glinny or Cahrsurraurher) and Ingredients Included
Glinny's Inredients:
- You have a 1% chance to not be able to double jum
- Instant death from touching the SIDE of a spike. Not the dangerous points, but the side of the spikes.
- Every loading screen is a bright blank white screen.
- The final boss of the game is a character first introduced directly prior to the final boss fight.
- The game's soundtrack was written by Nobuo Uematsu, but performed by 4th graders with recorders.
- Spells that inflict status effects virtually never work on bosses. (Partially)
- The first waterfall you discover has a secret cave, but the following 23 do not. (Partially)
- Customizable hairstyle but every selection clips through your weapon and armor. (Partially)
SLOGAN: Get ready to explode your balls into a firestorm of dust and skeletons.
CELEBRITY LIKENESS: Justin Bieber as "Squeelin" Shay Higgins (Partially)
Other Ingredients:
Surprise level up mechanics. You don't decide what levels up. When you reach a "Level up surprise" machine its is random what stats are leveled up.
Pressing "Back/Select" button minimises the game window
Terribly abrupt ending.
Awkward time to read the story intro.
A Day and Night cycle that has no effect on the game at all.

The ghost mechanic is actually cool, and you know what, I even enjoy the level up surprise machine. When Fire Emblem does it I get mad, but here it's enjoyable somehow. Excellently bad character designs.

Thanks for playing Kyle. I hope it was kinda fun. It was scary putting something out for anyone to play.

Very fun game! I managed to beat it after a couple of tries!

Did find a bug that made beating bosses much easier though. At least I don't think it was intended to be a feature. If you spam light attacks with one ghost and then press the swap ghost button you can get the other ghost (usually the sword ghost) to appear and keep doing light attacks automatically while you still have the first ghost out. So you have two ghosts out at the same time.

I'd look into that glitch but I'm too busy working on the Uneasy Alliance update ;) thanks for playing Olf :)

Pretty solid entry! Controlled decently, and the ghosts were cool. Random level ups is pretty silly and fun. Good amount of content to play through as well, I liked that you could choose either direction to go in the beginning. Though a way back to the Ranch after beating a boss without having to backtrack would have been nice.

The bosses looked pretty cool, but I was so beefy after the first boss that the second and final bosses didn't last very long.

Thanks for the feedback KevRev. There is loads I'd change if I had time but I was really pushed. But I'm glad you thought I'd was decent :)

I win!
Gosh that game was SUPER hard, probably spent an hour beating it!

I love the ghost swapping, really neat how you can only use one for a few attacks before being forced to switch back.

That being said, if I did want to stick to one (usually the ranged one), I would just stand in a corner and mash the attack button on the melee one so I can switch back. Not a big deal and it could even be seen as a mechanic, but perhaps maybe only have the bar deplete if damage is dealt?

Thank you so much for sticking with it till the end and for the feedback :)

I'm glad you say there is a lot of content because I had to cut so much stuff. Like the anime hot spring scene is the only reason there is a town in the game and now that town is pointless! I also had to cut a boss idea and I had animated another enemy that I didn't have time to program in. I was worried it would feel a bit bare bones  but you've put my mind at rest :) I was lucky to have a week off work so there where quite a few 12 hour days working on it. And the final day I submitted it I basically did an all nighter. I still ran short on time which is why the start menu and ending are so terrible.

My plan was to make it so that you only lost and gained ghost power on connecting attacks meaning youd have to land hits with one ghost to power up the other. But by the time I went to change it the code was an absolute riot and I didn't want to break it right when I was almost done.  But yeah, I thought people might end up doing that!

Thanks again for playing :) I'm back from my holiday on  Sunday so I plan on downloading and playing the other entries then. I'm looking forward to seeing what everyone else has done. They look awesome.

Really liked how the ghost switching worked, it was especially fun to adapt to early on when I had less control over it. Mechanically felt good too, had a lot of fun searching every area for as much experience as possible.

Thank you so much for the positive feedback. I totally had to throw a lot of stuff together at the last minute (like the menus and "story" stuff) and after I uploaded it I thought "what have I done". I thought if even one person thinks its decent then cool. So thank you, you've made it worth it for me. I'm on holiday at the moment but I'll download and play yours when I get home. It looks very very impressive :)

No problem, I genuinely enjoyed it. I often get the same feeling of doubt when I put something creative into the world, but not matter how it turns out, it's always worth doing.