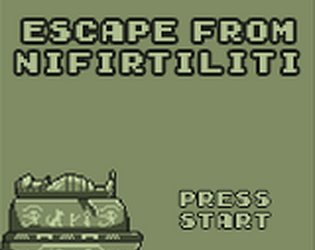 The pixel art is pretty good, some of the animations are really neat!

There are a lot of rough edges, but I appreciate that the structure of the level design. Despite the mechanics being extremely simple, there were places where the level did a good job of easing the player into using them. In particular, the first falling platform and the first spike were in places where the player could understand their functionality, without being put in danger. I also like how the scarab was placed somewhere that I could see but could not reach, which gave the player a hint of how the level would loop around on itself.

There were also some decisions that felt a bit strange, though. For instance, the only reason I couldn't reach the scarab from below was because of an invisible hitbox on the right side of the platform, which was confusing once I appeared to be floating in the air after getting the collectable.

Additionally, the player's attack was often confusing or ineffective. The animation doesn't make it clear where/how large the hitbox is, and there were times when the enemies just seemed to turn around right before hitting me. I figured that they may have simply taken damage but not shown any feedback, but ultimately I'm left guessing.

In any case, there were a couple of neat things going on in this game, nice job coordinating it all together!

Hey thanks!! We learn a lot with this Jam :D We appreciate your time!

Definitely agree, the starting animation is fantastic ! I think the distance of the attack could be a slight further so it's more comfortable for the players, but other than that the game plays solidly ! The spritework is very crisp and there's enough variety in the level places to make them distinctive ~

Yeah we have some stuff to improve! Thanks for your time and your comment :)

The starting animation is gorgeous! the game has a solid artstyle, even with minimalist backgrounds. Not being able to move while you attack is very Gameboy-y. The game is just about the right length, too, your level layout is well considered.
You could really benefit from some music, and maybe some shadows built into the background to help maintain the atmosphere. I really like the initial animation and the animation on the final door.
Thanks for sharing this!

Thanks a lot for your feedback! We are really happy for having been able to achieve this. We learned a lot and we want to finish the game for our little Bastet.

Yep totally agree! We are planning to add all of this :) We appreciate your time! :D