Find your way through a haunted castle, by manipulating gravity.
Submitted by Retrosaur (@RetrosaurDev) — 3 days, 4 hours before the deadline
Add to collection 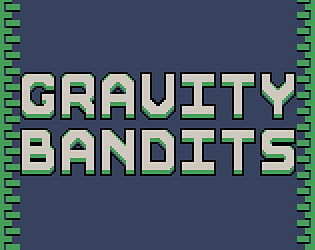 How long has this Project been going?
Gravity Bandits was started as a school project a few months ago, but it was finished in between the 15th or so, and today.

Okay so I tried this game and it's well polished and well presented. The only minor gripe I had is that I didn't even know what key to press to activate menu items. So I even had to fiddle to reach the help (but what really happened is I fiddled my way through guessing the controls, somehow).

I think you can get a pretty decent idea of what it does, and how it feels, by looking at the animated gifs : )

It looks nice but I'm not rating if I can't play it.
Wouldn't you consider making a small 1 level demo for the Jam?

I also made a game about gravity! Although the concept is completely different. Your gifs look nice! How is it selling?

Dude, thanks! I'm glad you like how it looks! As for how it's selling, it's doing decently, considering it's my first project to have a commercial release. :D

Are you doing any marketing?
Do you think I could have charged something for my submission?

Not as much as I should. I've advertised it on my twitter a few times, and I like to think the 500 or so followers helps.

And as for charging for your submission, I dunno that that's the best idea for a jam game (says the guy who just did it). I charged because it's a project that I'd already been working on, and I just used the jam as a deadline to help push myself through.

This being said, I'm sure it would be fantastic if you gave a commercial release a go for whatever it is you push out next: it's great for seeing the other side of game development.

Thanks! It may need a bit more work but I was thinking that a mobile release could be possible, and maybe even on steam, what do you think? https://itch.io/jam/finally-finish-something-2018/rate/219994

In my experience you will sell more on mobile than you would on itch. However the only thing that you are sure to get with anything commercial is pocket money, more so if you don't have marketing muscle. Hope you don't mind getting my opinion on this : )

There's a logic at work here. If you get free downloads in the 10s or 100s don't expect too many paying customers. Looking forward to playing your game as well.