Submitted by Salsadix — 1 day, 2 hours before the deadline
Add to collection 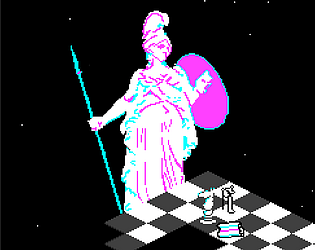 Thanks for the game!

I really enjoyed the challenge of solving the maze. Even the unintuitive controls scheme, that was annoying at the beginning, eventually felt like it belonged, complementing surreal atmosphere of the game world. Besides the 'unintuitiveness' of controls really made me think through every step, which supported the gameplay, that was all about spatial reasoning, perfectly.

The puzzle mechanic is simple but very effective. The chess metaphor works very well here: as soon as you got how the first obstacle work, you got all the others too. And I liked how twisty the maze itself eventually became, at one point forcing me into an impasse near the very end, only to make me realize that I was moving in the wrong direction this whole time.

Soundtrack and visuals are mesmerizing. My only regret was that sights placing was somewhat misleading. Even after discovering where the exit is, I was still unsure weather I was supposed to go there, since this Athena statue in the other corner of the level was so attractive. I think placing her near the exit from the level would have directed player's attention more effectively.

Special praise goes for the game web page design. It sets the expectations and grabs attention even before the game starts.

Cudos for the great work!

Awesome game idea! Also, I love the vaporware/pixel art style 💘
I wish it would be also playable with the mouse - but maybe that's only because I died several times pressing the wrong direction button :D
Well done! Stay funky,
Dez

I hope to add more pixel art to the game, I had little time to make them, but great concepts for the future :)

I did think about using the mouse to move arround but i'm still thinking about it, I have plans for the mouse as well :P but yes, the controls where counterintuitive for some of the players (I think I fixed it, I'll add that in the next version).

Very original! I really liked the gameplay concept of avoiding the chess pieces and changing colors to change your enemies. Very cool!

Thanks for playing! I saw your game on the stream and I'll play it today, I love it so far, and I love the art in it, congratulations! :D

I got to the scroll but can grab it. I think you got a bug there.

what a very clever mechanic you got there, of chanign colours to dodge the chess pieces by changing color! although what happens if osmeone doens know how the chess pieces move? I guess that reduced the accesibility of your game. I like the concept, and overall I think i could expand for a big puzzle game. Great job!

Edit: After a while i figured the scroll wasn the ending, but some sort of check point. Still, I died later and it took me back to the begining, instead of the scroll. Still a great game

Please give us a review: https://anlevant.itch.io/almost-there

Thanks for playing! I didnt put a scroll in the game but I suck at drawing :P It has no checkpoints (yet) but I have them on code to put some in the future. Thanks for the feedback! :D

PD: I played your game but I want to get the secret code to give you a full review, I'll be doing that later today :P

Love this game and would definitely play more of it if it existed. With no checkpoints it felt very unforgiving though.

Submitted
MY NAME IS OZYMANDIAS
LikeReply
SalsadixDeveloper2 years ago(+1)

I'll put some checkpoints and more levels ;) thanks for playing!

Love this game I could definetly play it more like said in another comment if there wasnt 1 shot kill maybe you could allow 3 hits or mistakes?

that's a great Idea! :D I think it could work. I will put more levels and a few new mechanics. Stay tuned and thanks for playing!

Wow, this is actually a really cool concept! I definitely would like to see more of this, although I found having to restart the level upon taking a wrong step to be somewhat annoying.

Submitted
A Cat, a Zoog, and a Gate
LikeReply
SalsadixDeveloper2 years ago(+1)

I agree that restart the game each time you loose is annoying, I made checkpoints to put in the final version, but they made the game "too short". I'm thinking in making shorter levels and checkpoints for the longer ones. Thanks for the advice and for playing!