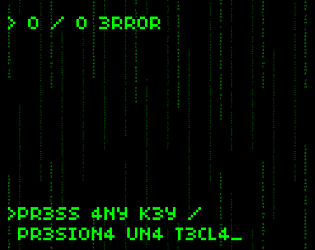 Tanks lux pp, is difficult to understand but then it is very simple to play

Thanks Jupiter Hadley, excellent journalistic work on this jam

Surprisingly enjoyable after I figured out how to play.

I didnt really understand the game but.. I included it in part 15 of my Cyberpunk Jam compilation video series, if you have time to check it out :) http://youtu.be/6f27GLhimV4

Thanks for your comments BigRoyNL

I like the simple pick on the theme but it feels unnecessary hard! :D

It's actually pretty hard because you're always toggling through the list of rock, paper, scissor. I think with speed/occurences text passes by at the moment it's better to have three buttons that set a certain state, e.g.: 1. rock, 2. paper, 3. scissors. Then you clearly define what as user's input is doing as a result.

Instead of making it hard to play I would simplify how the user interacts with it and instead increase the difficulty (amount/speed) things are passing by over time. Also make sure that at some speeds the text passing by becomes unreadable (too fast scrolling) and then it might be better to have more stuff happening at once.

Thanks, I'll remember that. I must add instructions.

Sorry, no idea what I'm supposed to do.

Needs some directions on how to play.