Neat game! Putting some spin on the ball is a cool idea

That's a fun game! I think you've got a great idea there.

Very sweet. Lovely game. Thank you for sharing it.

Played with this for a while! Very very cool.

Yep, that's exactly it. Better gamepad configuration is on the roadmap. Thanks.

Thanks for the feedback. The blockiness is intentional -- I don't have the time to create more than one set of assets -- but out of curiosity, what's your resolution?

Input mapping is on the radar. Thanks for the reminder!

Gotcha... Those are good notes and I'll work on them. Thanks!

Thanks for the great feedback, Jonathan.

When you hit the waypoint itself you exploded? Can you give me more details about that? Definitely shouldn't happen.

Coins sometimes orbit the ship... it's technically a bug but I kinda like it so I've kept it in. Undecided at this point.

Fuel continues to go in but there's no indicator... I get that it could be confusing but I basically didn't want to clutter the UI with the fuel ring until it gets low. Was never super happy with it... could probably use an extra indicator, maybe something small.

I like the idea about coins regenerating some gas... interesting to think about... with respect to shooting things offscreen... how do you feel about player bullets only working when they're visible? In other words, they wouldn't work off screen at all.

Online level sharing is a planned feature. From within the game, you'll be able to browse levels that other players have created, download and play them, and upload your own levels to share with others. In the meantime, here's where your levels are saved:

Levels are stored in plain text so they are small and easy to share. You can make a copy and send it to anyone by email, Dropbox, Discord, etc. Then they'll need to save the level on their computer, open the editor, load it, and play it.

Awesome, thanks! That's great to hear that it runs well on your integrated graphics. Let me know if you have any suggestions for improvement too. Even small things.

The game was designed to be played with a controller and the tutorial covers those controls. But you can also play with the keyboard and mouse. There are two schemes you can use and they're both active all the time:

Probably this'll get moved into the options menu eventually and you'll be able to configure the controls.

Same as arrows. Can also use Y button to thrust.

Thanks for participating in this playtest. Please have fun and take your time. Let me know if you run into any issues getting the game or running it either here or on the Discord server. Once you've had a chance to play it, please post your impressions. I'm looking for feedback on:

Please be honest. I'm open to accepting any feedback and criticism you have. Thanks!

Had a little issue with my gamepad. It wasn't detected at first even though the controller works with every game on Steam. I'm using xboxdrv to emulate an Xbox controller. Here's how it's reported by html5gamepad.com:

The screen shake when those exploding spider things explodes isn't synchronized with the explosion. Feels like it's about a 1/4 second late.

The default gamepad control layout uses X to jump. Since it must be held, it's difficult to aim, jump, and shoot at the same time. I also find it completely unfun to control the camera. I wish the camera would just show me what is important by itself. Some combination of where I'm going and where I'm aiming, weighted towards aiming, would be a good start, I think. In shooters like this, for me, it always feels bad if I have to take my thumbs off the sticks. Like, I just want to shoot stuff non-stop and if I have to stop moving so I can switch weapons or stop aiming to jump, it kills the momentum. It's great that you can remap the controls but losing two buttons to the camera is rough.

I think the depth of field blur is too strong and it's distracting. Here's a couple of examples, both involve not being able to see where I'm looking. First, my landing spot is blurry: 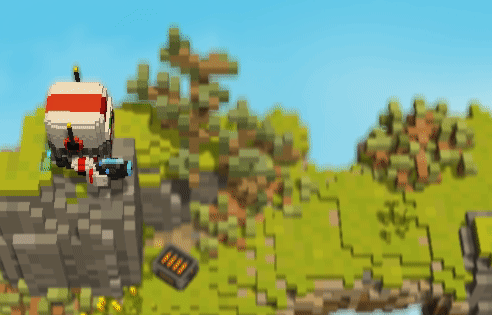 And I can't see enemies down field. Even when they're at the edge of weapon range they're slightly blurry. 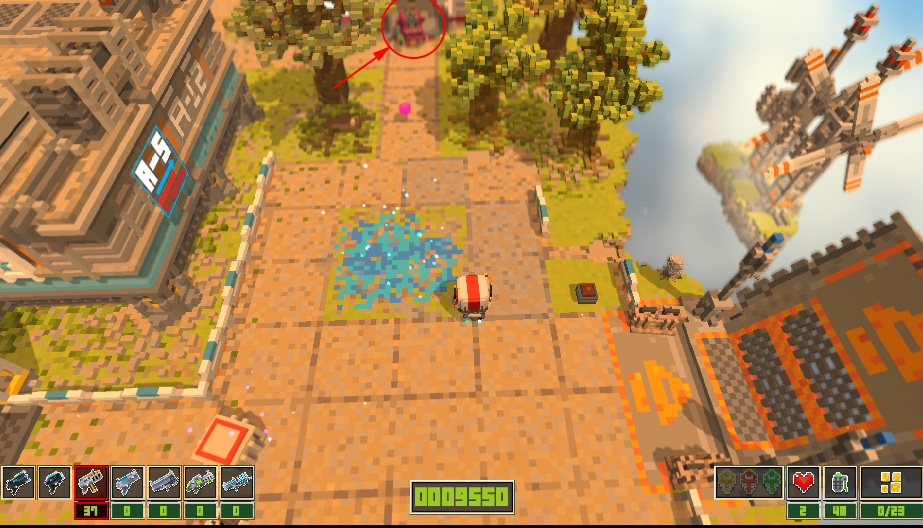 I think sim city style games are fascinating. Something about tiny worlds and tiny people and tiny cows. It's definitely on my list of achievements to make a chill sim sandbox game like this one.

Nah, it's a bit derpy, you're right. Surfing might work with your gamepad (left stick and A button). I didn't do any testing with the gamepad though so none of the UI works with it.