A Family Comedy without the Family.
Submitted by Fhy, BoreasTheEdgelord, 1kmountains, chunholum — 53 minutes, 16 seconds before the deadline
Add to collection 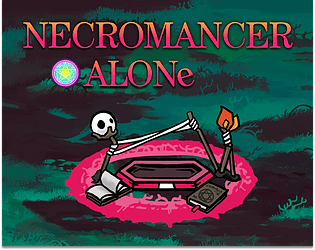 How does you game fit the theme?
Necromancer is alone... or not.

That is so cool! Oh, I love your game so much

Story, concept, execution are marvelous. Art is incredible. The creatures you are allowed to make are just the perfection (yes, every single one of them)

Actually, it was really hard to stop playing!

Wow! Astounding game. The creating of the friends who fight for you was really in depth! I also like the artwork. very well done :)

Cool game! I liked experimenting with the different types of body parts and the different behaviors and stats! I do think it would be a bit more fun if you had more to do than just making new "friends", maybe some more objectives that you can find and defend? This reminds me a lot of a different game for the jam, Scrapped, and the two are very similar, in that game however you are always moving around to try to complete the objectives to get more loot so you can survive longer. I also think in this game you could afford to make it harder and have the enemies spawn from both sides.

Submitted
A Shot in the Dark
LikeReply
FhyDeveloper151 days ago

oh yes! I also played Scrapped. It's a great one.  I love their map and level designs. They are a much better way to drop the loots

I really like the game. The art is well made. According to my thoughts, I feel like a long range weapon for the player would be a great addition, so that the enemies don't get too close to the player to harm it.

Submitted
A Shot in the Dark
LikeReply
FhyDeveloper151 days ago

sounds cool. long range weapon could be a better fit for a necromancer

I love the idea of building my own teammates. Nicely done! Some feedback during combat would have made it more satisfying.

Submitted
You're Not Alone
LikeReply
FhyDeveloper151 days ago

indeed it is a lack of feedback. wish we could have more time

Beautiful game with a good music ! Maybe it is a little slow sometimes, but overall, great job !

most people found it's hard, you the first one saying it's slow haha

anyway thanks for playing

This game is so much fun!

It's a real pleasure to create an army of vile monsters! :D

The idea is great and it is accompanied by very neat drawings.

Congratulations for your work!

Submitted
NOT ALONE: Kill'em all!
LikeReply
FhyDeveloper151 days ago

thank you for playing :)

Awesome! Clever take on the theme. I love the art style and the whole vibe of the game. Cool & interesting mechanics. There is too much going on, but I really appreciate how you put up all the details on the game page. Great work guys.

Submitted
ALWAYS HAS BEEN
LikeReply
FhyDeveloper155 days ago(+1)

Thank you :) Decorating the game page is  the last thing we can do for the missing pieces in the actual game lol

LikeReply
Lion In A Box GamesSubmitted156 days ago

First off it's really impressive what a complicated game mechanics you have built for a game jam in such a short time!!! You can build your own characters, like what?!?  :O
And it even changes their strengths and statistics.
That is extremely impressive and a  challenging mechanics to implement!

Also the intro story  was very cool, artistic and captivating!
Your drawings are beautiful.

Now when doing such an ambitious project, the extreme challenge is the polishing:
Probably there were a few hints needed in the beginning on how to build a character. But I guess that you can figure out after some time.

Beside that:
I would have liked to be able to walk and hit towards the other direction, so that the attack follows the mouse, not the walking direction. Otherwise it's almost impossible to efficiently attack the enemy.
When attacking, you slow down and do not walk as fast. That also makes it so harder to attack and/or escape.
When you are surrounded by enemies, you cannot move because of the collision. you're basically trapped if you don't have enough time to kill every enemy in your way or no ressources to build a friend from where you stand.
You cannot get rid of items you collected:
That  makes it that the store fills up with items you do not want to use, and you cannot collect items you want anymore, cause your bag is full. And then  you are forced to build half characters you didn't actually want to build.

Overall I would say you should have been less ambitious for  a game jam and simplified things:
add less items and diversity and enemies, but instead focus more on improving, polishing and perfecting the game play, and some guidance on how to play in the beginning.

I think your project was insanely ambitious, and I bet a million dollars this will be a top tier game once you have more time to finish it. If you're more reasonable and modest with your goals and features before the deadline, people will enjoy playing the  game more- even unfinished with less levels and options.

But great job, you're amazing and very competent   game creators and artists, this was an incredible task to pull off, and this game is gonna be lit once finished!

hey!! thank you so much for playing and for leaving such a detailed comment! really appreciate you taking the time.

I like you said this is an ambitious project. To us,  we gathered an interesting idea and then simply implement it within a short period of time. We didn't think that much tbh xd. So yes, we end up don't have enough time for level design and game balances. But, it's okay, the best part of the game jam is not the end result, isn't it? We had a great time during the process. And we made some reusable code systems for future usage XD

Regarding further development, I would say this is absolutely a game that has great potential. (i said this in every game jam lol) so idk what will happen next.

LikeReply
Lion In A Box GamesSubmitted155 days ago

That's great, you're pragmatic and process focused!
I see haha.

This is such a girls game. Dressing up undead minions, even mannequins and fight against hords of fashion criminals.

but seriously, great interpretation of TD games. It took some rounds to get used to the game logic but this is something that you can play for sometime before it becomes stale.

The meele action, especially in the beginning, is something that I did not like. May give the necromancer a short ranged weapon?

"fashion criminals" lmao i'll tell our artist about that

about the necromancer attack, that's a good idea. We were thinking of some kind of power-up for him.

WOW! This game is amazing! Very unique idea! I love the mechanics and the idea of collecting body parts and making companion! I like that there is variety of body parts. The UI is beautiful. The main menu is cool. Difficulty raises quickly. Audio was also great. It was addicting to me :D More people should play that game! I had so much fun playing it! You did such an amazing job!! I recommend it!

Thank you for playing and for the great words XD

I also hope more people can see this haha

Some people are saying that the difficulty is quite hard. We didn't notice it as we have developer biases.  Glad you mention it!

Love the art style and the way you can combine different body parts, each with their own stats. Gameplay needs some tweaking to balance it and could do with an ending, but it's a great start :)

We have a similar concept to the theme! a great job on the user experience part!

Nice game and graphics. Needs more feedbacks/when you hit or get hit...etc.Good work over all!

thanks for playing and for the feedback. that's a good point for UX

Loved the art style and the prologue, helped me understand what's going on. Nice game, I enjoyed it, and was harder than I expected to be honest!

thank you for having a try! we know the game balance is sucks. could have easier enemy at the beginning

I loved creating little monsters and I loved the art style you chose! Do you mind checking out my game when you get a chance?

thank you for playing :)

I think the storyboard at the beginning was a great idea to give it some context, really elevated the game. Also love your take on the necromancer theme, its really different to ours and definitely way more funny :D Investing some more time post jam to give it some polishing and to remove some bugs would be worth it imo.

An option to delete parts from your inventory would have been nice.
The different behaviors of the body parts weren't always clear to me, it might be a good idea to put a short description of the different parts on your game page similar to how we did it with our game.

hey! thank you for visiting here! i was joking at your page haha

we don't have time to implement more unique features for different body parts. they only have different stats.

basically, heads have ranged attacks hands have melee attacks and legs are for moving.

Alright, I thought I had missed something because of the note on your game page.

Looks like the joke went right over my head, that's on me :D

I Liked it tbh lol