This is FineView game page

Use your trusty senses to survive as long as you can in the galaxy's flimsiest ship!
Submitted by GammaFoxTBG (@GammaFoxTBG), Alejandro PHz (@AlejandroPHz), Arkanpixel (@arkanpixel) — 3 minutes, 5 seconds before the deadline
Add to collection 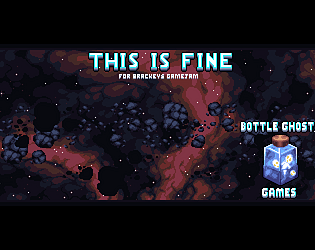 This is Fine's itch.io page

In what way does your game fit the theme?
You're constantly trying to repair the stations on your ever-decaying ship!

Did you write all the code yourself and made all the assets from scratch?
Yes

Very cool! After a while I often found myself just rotating between 4 stations (ignoring the elevator and the heal station) but there's a lot of potential here!

Very cool game, the pixel art and the audio are awesome! I would've liked more clarity on what needed repairs, because sometimes I would hear "warning" but didn't really know what to do, but overall the game is fun and felt very polished, great work :D

Really nice! The audio cues were cool, although it would be nice what they were warning me for in the beginning. It's a shame the tutorial didn't get in, as I think it would have made the game more enjoyable. Being thrown in with everything happening at the same time from the beginning is chaotic, but more stressful than fun. Visually, it's amazing. It really looks like a space ship that is hanging on by a thread. It really adds to the atmosphere! Nice job from everyone involved!

I like the idea but its said to hear you couldn't get everything in. It would have benefited from a tutorial were it shows you the signs of what you need to fix. As of right now I just randomly walked around the ship repairing stuff not really know what I was doing.  I really liked the art style though and it was very unique gameplay compared to other game jam games. The gameplay reminded me of Among us and FNAF very unique.

This game was really fun! Having to manage all the different systems on the ship was definitely very chaotic. It was kind of annoying how quickly the asteroid hit after the alarm started though, felt like you had no time to respond.

Amazing art and great sound effects. The gameplay was fun although for a game of this style, I think a lot more feedback is needed for the player. Otherwise, great job!

gorgeous pixel art. Gameplay was simple but understandable. Love it

Thank you! I'm really happy with how the art turned out :)

This is straight forward an amazing game!! It's very chaos as you and only you need to go around and fixing everything on the spaceship, and really need to have a good strategy and priority of what should be fixed first. Overall, it's an awesome game and I want to see more game from you in the future.

Thank you very much, glad you had fun!

This is an amazing game! All the mechanics are well implemented and understandable. The game seems incredibly polished and both the art and music are great! The ship quickly devolves into chaos which fits the theme very well! I also enjoyed the humor and theme in this game (and the alien in the vents). This game is probably one of my favorite so far and definitely deserves more ratings. Great job on the game, I love it!

Thank you very much for your kind comment, we're really glad you enjoyed it!

This game fits the theme perfectly, I love how there are so many systems to help you survive, but so many things going on that you quickly lose. Incredible.

Submitted
Let There Be Chaos
LikeReply
LegingergamerSubmitted1 year ago(+2)

Very nice artstyle you got for the game. Looks like you made the most of the style you went for. Gives me vibes from Lovers ina Dangerous Spacetime. Constantly fixing things and moving around

LDS was definitely an inspiration for some of the gameplay! Thanks for the feedback.

Love the artstyle! Might want to add hints and tutorials to the game. As I was a bit clueless on what to do

Yeah, unfortunately the tutorial completely slipped my mind by the end. Ended up adding a little schpeel in the description so people know you're just supposed to repair the stations and stay alive, but I'm glad you enjoyed the game.