Save the earth... With portals!
Submitted by Adrielus — 1 day, 1 hour before the deadline
Add to collection 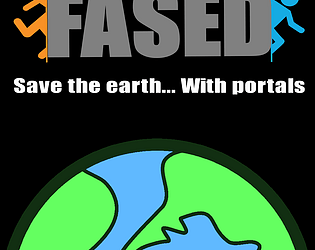 The idea is interesting but the gameplay is too difficult for me. Too fast. Even at the start I can't juggle both portals, I can put one of them and then try to catch the meteorites as close to the planet as I can by clicking the other button (if it wouldn't go straight for the planet, obviously). But then the speed increases, and it gets impossible. But the idea is cool :)

Also, a qiock tip if you want to cheat: you can bring the dev console by pressing t a few times. After that, you can write commands like "axios hp number" , "axios score number" , "axios set warp number" (the startinf warp is 0.1) and even "axios set G number". (The console was an easter egg, but looks like nobody found it)

Again, thanks for the feedback!

Congrats for finished the game, well done.
The gameplay is interesting. Music is exciting.
The difficulty increases very quickly.
Maybe put more asteroids on the scene than making them faster.

Please, rate my game and leave some feedback too =]
https://itch.io/jam/blackthornprodgamejam2/rate/378954

Thanks for the feedback!!! Ill definitly play and rate your game when ill have some free time!

It may be me but I wasn't getting the aim of the game and how it relates to min planets?  It seemed like the start of something cool.  I did like the portal idea and the way that worked along with the gravity but somehow didn't get the concept.  Probably needs a tutorial and phased approached to get you in to it :)

I'd really appreciate if you could take a look at my entry and also rate it :)

Thanks for the feedback! Ill definitly play yours!

Idk, (im making this out rn, dont take it seriously) the portal gun makes small portals, so the planets are "mini" i guess?

Also, ill make a trailer soon, ill try to do my best to make you instantly get what the game is 30 secs

Again, thanks for the feedback!

I like design of itchio page lol. Not much to see in the game itself and I don't see how it relates to "Mini Planets" theme, but props for very cool idea! Also subbed to pewds :)

Be sure to rate my game and leave some feedback too! https://itch.io/jam/blackthornprodgamejam2/rate/379272

Thanks for the feedback! Ill definitly play yours!!!

Also, about the "mini-planets", idk, the fact that you can control the universe from a cmd (press "t" a few times to open it) (u can write commands like: "axios set warp 0.1", "axios set G 10" and "axios hp 200") makes the planets seem small? (Idk, i cant think at anything better for the "mini" part)

I liked it, difficult is fine by me. But maybe build it up a little. Spawn meteors a little further away at the start at lower speed and gradually bring them closer and/or faster. And if you spawn them in the camera view, let the player now (with a flash or whatever) that he can expect an enemy spawning over there.

Earlier mentioned by others is that the spawning of a portal not always works. I thought maybe it is because you are clicking on a meteor, should check that.

Overall the game is fine, needs some tuning and graphics and a tutorial is always nice to have :)

Also, if you just want to play with it,  you can also bring up the secret dev console (press t a few times) and call "axios hp number", "axios score number" or even "axios set warp number" ( the min and starting speed are 0.1)

Again, thanks for the feedback!!!

I liked the game, it was pretty difficult.

The music is really good and the art looks pretty nice. My only problem with the visuals is the background, the rings sometimes become extremely fast and it just hurts my eyes.

The gameplay is very fun and addictive, I always wanted to play more. I did have one problem, there was a delay of pressing the button and the portal spawning (maybe because I am using Microsoft Edge), it made the game even harder.

Overall I liked it, I'm probably going to play some more.

Im happy you liked it!

Because i didnt have much time, i wasnt destorying "dead" planets. When ill have some free time ill definitly do that .

I only tested in chrome, so i'm happy about it working in edge (it has some bugs on firefox).

Do rings become fast from the first play or after your press play again? I was encountering a bug with the ring speed not beeing reseted.

If you have any more suggestions ill definitly like to hear them!

Originally i wanted to make a game where you have a cmd that controls the universe, but i decided to do this instead, however, i didnt want to throw the cmd away , so its till in there.

Now i realised i wrote a giant message, sorry...

I like the concept of using portals to defend from the asteroids.

After a while it gets really difficult and there is not too much time to react on the incoming hazards. you might want to spawn them from outside of the camera view so they don't just appear out of nothing and the player has a little bit more time to place his portal.

Keep up the nice work :)

thanks a lot! This week ill make an upsate and ill also include your suggestion!

I get how to put out the portals but using them to get rid of the asteroids is way to hard. But i think that with some balancing this game could be really fun!

For me it was easy (most probably) because i made it and played it all day.... I gotta thing about others too:)

maybe you could make a tutorial on some good strategies, i think that would help

or maybe make a yt vid with me playing it and playing it in the background of the main menu?

Yeah that could work

I have no idea what to do, i can klick out the portals but how do i actually get rid of the meteorites, don't answer the comment, make it shine trough the game.

ill update it next week to exlain how to do it, thanks for the feedback