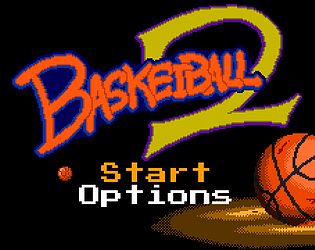 Describe how your game adheres to the theme
Basketball 1 was doing just fine and also it's no longer the '80s but we made a logical, historically-accurate successor anyway.

Style in this game is excellent, loved the art and music

The gameplay is wonderfully silly and chaotic. I like how you can just pick up the opposing player while they're still holding the ball!

My main complaint with the gameplay though is I found the controls a little confusing. I wasn't really sure what the "shove" command did and there seemed to be no way to control where the ball went when you tried to dunk it, usually leading the ball to fly off at near lightspeed away from the basket I wanted it to go towards.

Shoot, thanks; I would not have expected self-extracting archives to be considered installers. I'll stick to the suboptimal but universal compression of zip next time and trust that people will extract the whole folder instead of just double clicking on things next time.

Just a heads up, your game uses a self extracting archive which is technically a violation of the rule against installers.

We talked it over and decided to let it slide in this instance as it doesn't do anything more than unzip the files into the target directory. In the future we're going to clarify the rule to also include self-extracting archives.

tldr: You're fine, just don't use self extracting archives in future Awful jams.

It's a fun game that doesn't feel too simple or too boisterous as many sports games tend to. It's got funny little moments and a solid loop and an expected annoying computer to play against. Passing would be cool, though I never use it, but it would expand the perceived space of mechanics. The art is nice on the whole and again, the sound is appropriate and enjoyable. Theme adherence is middling, because it's basketball with more stuff, but it doesn't feel like it's been really necessitated or established why or what specifically caused it. It's a good bit of fun to play and I'll likely revisit it soon.

Lol, crap, I guess neither of us is that original of a person. Same name, even. May the best Basketball 2 win.

A fun game with a cool coherent art style. Plays well, but it's hard to know sometimes whether you have control over the player or not.