A 2d racing game, where each collision switches the car you're controlling
Submitted by Catelyn (@catgirlQueer) — 47 minutes, 44 seconds before the deadline
Add to collection 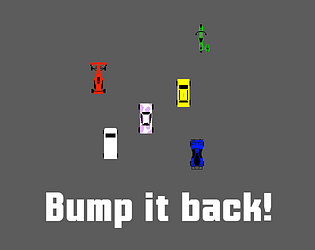 How does your game utilize the limitation and theme?
The cars are all physics based, and each collision causes the car you're controlling to switch

Which diversifiers did you use, if any?
My own noise

A clever idea that could be really fun if developed a bit further.  I had some trouble with the camera swinging vary slowly to orientate on the car, I think it would be much more controllable if the camera were just locked to the car...

Submitted
Roll With It
LikeReply
CatelynDeveloper1 year ago(+1)

yeah, in hindsight that would've been better

Multiplayer modes either competitive: there's one non-bomb car and everyone wants it -- or cooperative: there's a non-bomb car each and you need to get them and keep them for your team, might make a really cool party game...

those competetive modes are a really good idea, I think I'll have to start from scratch to make that work properly, but it can be worth it

I really loved the theme implementation, but i think the cars go too fast, but i give the game 9/10

(ps: Thanks for playing mine!)

yeah, the balance is a bit off, might try to make a post-jam version that has better AI and more features, but who knows?

I will definitely play it!

I love car games and I loved the mechanic on this one.

Along with the whole switching the cars before the time runs out. Real adrenaline rush.

Also the UI was clean but a little unclear, as I had to keep my mouse over 'Levels' and then drag it right to select one.

Lastly, like others, the camera could've been implemented better but I liked the rotation which happens whenever you're turning.

Really nice game idea, but sometimes it's hard to control.

Hey, I loved the mechanic of the game! I played each level for about 5 min. I know 15min is not a long time but here are my thoughts.

My favorite level was the middle one where the roads crossed. I would just wait in the middle and try to hit the cars as they passed by. I was able to get really far that way over 7 laps. The other tracks where much harder to hit other cars with. My favorite part of the game was the switching of cars and I think the roads crossing made that happen more often.

The camera being slightly out of sink with the character made the game really hard to get used to. I think this made the driving more difficult then other racing games I have played.

yeah, the camera rotating was really an afterthought and I could've implemented it much better in hindsight

Hey, this game was super fun to play! I unfortunately didn't have as much time to play it as I would have liked, but it had some super interesting mechanics that were well executed. CobaltPath and I also came up with a similar theme for the jam, so it was really awesome to see somebody else execute a similar idea in a completely different way!

Here are the things I've noticed from my short 10 minutes of playing the game:

I overall really enjoyed it, and I was really hoping somebody would do the same mechanics but in a 2d top down racing game, because I love these. Nice job!

Thank you, I might try to make a real version of this, and the camera was kind of an afterthought haha

Yeah I totally get that, it's also not really an easy or fun thing to implement. Don't worry, our game has camera issues as well.