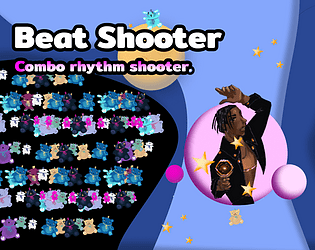 I like this game a lot, doing things in time to the beat is always fun and it's really nice to reward the player for that, but it feels a little unintuitive.

I spent the first while thinking it was a carnival game and that I had to shoot the dudes, but it turned out I had to let them get in a row and shoot the front one so the ones behind them collapse. I then spent a bit of time thinking I could stay in other lanes and shoot the dudes up front, but it turned out I needed to be in their lane to shoot them. The hitbox detection also seems to be a little bit wonky, the left-most column had several times where I shot the guy and nothing seemed to happy.
I almost wonder what the need for freelook is at all, but it's a gamejam! The point is to experiment! I can't blame you for that.

Sorry, that probably comes across as extremely negative, doesn't it? The truth is, I jumped in expecting a silly gimmick and then spent the next half hour grooving to the music, and zoning the rest of the world out. Every time I died, I groaned and quickly dove back into the fray, hoping to see things up again.
I'm assuming 50k is the final stage? I passed it and it didn't seem to increase, so I quit the game shortly after that. Hopefully I can see more down the line, maybe some more tracks or more sets?

Its very good. Only thing I would do is to make the gun sounds like 2x louder. It would really help the game feel.

Amazing! Wish I did the same mechanic on my game, how did you do it? Like how did you get the bpm from the music? Are you guys using midi files, or extracting the beats directly from a mp3/wav?

@IceFROTTEE wrote the music to a specific tempo - then we repeatedly fire an event when one bar is complete by checking the audio playback time and doing some math with the BPM.

It’s a bit finicky. Very easy to have it go out of sync. To keep it in sync we get the time from the audio track samples directly, and make sure that if we check the time a bit too late (if the update loop misses the exact beat time) we subtract however much time we are over the beat.

So far by doing that the beat events will fire reliably in time with the music. IDEALLY it would have been super cool to use some charting software like Moonscraper but it was a bit too intense to integrate in the time we had :D

I like the bassline on the level up! The disco dance floor predictive shooting is a cool touch too, sort of like if the carnival games could shoot back!

Thanks! Yeah exactly. 💃 Carnival of PAAAIIIIIN