Dungeon game made for 2021 1-bit jam.
Submitted by superuser256 — 1 hour, 22 minutes before the deadline
Add to collection 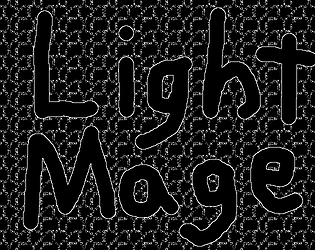 Does this game has a final? I played a while and had to stop to go to sleep, I reached dungeon 11.

It doesn't have final, the dungeons are procedurally generated, but the random is seeded as 210893 + 100 * dungeon, so they are the same every time you play.

Fun game, I like the little story at the beginning. A lot of different spells which was very cool. I only wish there was sounds/music! Good job!

For a first a Jam, is very great !
I rely like the mini map and how you use the nose for background (only in black white nice o_o)
Have you use the one button theme ?

To fit in the one button theme, I added that it blocks input when more than one key/mouse button is pressed at once. The game renders with colors onto framebuffer. Postprocessing shader converts the colors into grayscale (brightness between 0 and 1) and adds random number (also 0-1) to it (which just is hashed position). If the result is greater than 1, it sets color to white. This is a simple to implement dither-like effect. You can try to play with it - shaders are compiled at runtime, so you can change them in data/shaders/post.vert and data/shaders/post.frag. There is also edge detection function, which was my second idea how to make the game 1-bit, but it didn't look that good, but I kept it there anyways.

Looking at your game screeshots (sadly I can't play it; the build is 64-bit, but I'm on 32-bit windows), it seems like you used real dithering. May I ask, how is it done? :P

cant get it to start, only opens cmd?

Hmm, that's a bit strange (when something breaks it usually ends with crash,) maybe you can try to build it from source yourself. It is a visual studio project and the libraries (glad, glfw3, glm and stb) are included in the source zip. Also it opens cmd and the game window, because I don't know how to hide the cmd :P, maybe you just missed the game window.

Edit: After second thought, I think you really just missed the game window :). Menu is also mostly black, so if the cmd was over the game window and only a small strip of game window was visible, then it's not hard to miss it :). It is even easier to miss if you have dark background :D.

i dont know how to build it from source? :P

only game i havent rated/played.

If you want to compile it yourself, you can:

Also, what hardware and OS do you have? Might take a look what causes the issue here :).

Another way to try it would be to try another machine :).

really fun game. i dont like the movement and sounds would have been nice. xD

I still have no idea where the problem is, but at least it worked now :).

This is a great idea.  The dungeon is well built.  The visuals are great.  I didn't have any sound.  Overall though, I played this a lot longer than many of the other entries in here.  Great job.

I never used any sounds in my programs, and in jam there is no time for learning how to make and use them :). A while ago I was looking at sound libraries and YSE looked pretty promising, but I've never used it. Maybe next time :).

I normally use Bosca Ceoil - https://terrycavanagh.itch.io/bosca-ceoil

Wow, what an great idea! A cool little dungeon crawler with a level up system.

In my first run a reach dungeon 4. How many duneogns exists?

The dungeons are procedurally generated (you can look at the source - dungeon.cpp), but they are seeded the same every time (The seed is 210893 + (++level) * 100). It constructs Gabriel graph from random points (rooms), and then makes corridors between those points and rooms with random size at the points. Also, the starting room is always in center of map.