Time for another update, you can now host flash games on itch.io! Because it doesn’t make sense to sell them like like a normal downloadable game, the SWF will be playable inside of your game page and players will be given the option to support the game by donating.

Uploading a flash game is easy! Just create an new game, or edit an existing one and select the Flash Game option as the kind of game.

Then you just upload a SWF file and you’re ready to go. 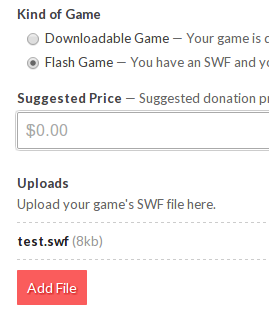 Note: if you’ve happened to have uploaded a SWF file before this update, you’ll have to delete the and re-upload it for the SWF to load correctly. Some changes were made in the upload system.

Antichromatic
The world has been fractured into two dimensions. Can you save it?
arkeus
Platformer
Play in browser

Antichromatic
The world has been fractured into two dimensions. Can you save it?
arkeus
Platformer
Play in browser