> is this multiplayer
No

> and if not will it ever be?
Probably not

They are on the steam page

There might be depeding on the success on the game.

Thanks for the nice comment! My goal is to launch the game the 24th of January of 2020 in Early Access.

It's not available to buy yet, you can only wishlist it for now

That's unfortunate and I am sorry for the dissapointment and I understand your decision. However its not profitable for me to maintain 2 forks of the project, a steam one and an itch.io one so that will not change

Well, thank you for showing interest in the game! I really appreciate  :)

Unfortunately no, I used to do bi-weekly beta releases to a select group of people but it was quite time consuming and I prefer to focus entirely on development. With that said I appreciate your interest in the game and if I start to do more closed betas I'll let you know

Via STEAM when the game is released

Well, I can't seem to find it. I also checked the other folders.

Either send it to me again or give me your email so I can send you one.

Are you sure you used the correct email? I haven't received anything in my mailbox. Can you show me a screenshot of the email headers?

EDIT: By email header I mean the subject, the sender and the receiver so I can search for it.

Send me an email at zaphyk@live.com

I understand your frustation but I mentioned earlier the reasons why I made this decision:

People who donated 50 cents won't get a key, because It all got eaten by fees. Thats what I am referring to. It wasn't mentioned in the reddit posts because:

1. I didn't know that was going to happen.

I think it's a reasonable distinction to make.

If you want I will provide you a refund of your 0.5 USD out of my pocket (since I never got that money). If so please send me your email so I can paypal them to you.

That is not a dedicated video card.

According to the log your OpenGL version was 2.1.0 which means it doesnt support the minium requirements for the game ( OpenGL 3.3)

What is the model?

Do you have a dedicated video card?

This is seems to be a known issue with integrated cards and hedra, because they don't have dedicated VRAM the game crashes when trying to allocate the memory for the world. I don't have an ETA of when I will update the demo with the fix.

Sorry for the incovenience.

send me the file, not the contents

What do you mean? It doesnt get created?

Does this folder exist in your PC "C:\Users\chibisuke1219\AppData\Roaming" ?
What is your video card?

How many disk drives do you have?

Can you send me the log.txt file on the games folder? It should help diagnose the issue

According to the log its failing to access APPDATA because of a lack of permissions, do you have 2 drives? It may be causing this.

Can you try running the game as administrator?

> What is the threshold? This was not mentioned at all in your reddit posts.

People who donated 50 cents won't get a key, because It all got eaten by fees. Thats what I am referring to. It wasn't mentioned in the reddit posts because:

1. I didn't know that was going to happen.

I think it's a reasonable distinction to make.

> And what I would like is the ability to download the version which _was_ here on Itch. Not the Steam demo, not any other demo. Just the code I already donated for. I don't see how that is being unreasonable.

I offered you to be included in the closed beta before steam, it is no demo. This closed beta entailed updates with the content that will be on steam. But well...

Quote: Since you bought the game I want to let you know that I'll be doing a closed beta before steam and you might be interested in that

> Ever bought a game on Steam? Regardless of what the game developer or publisher do Steam will allow you to download what you paid for even after it has been removed from sale. That is the correct behaviour. That is what I expect all Itch coders to do. Just taking away what has been purchased with zero warning and no way to get it back is - IMO - very wrong.

Yes, I know. But AFAIK  itch.io doesn't allow doing that. Regardless I 'll try find a way solve the issue, either by sending you the game via discord or finding that option on itch.

> I bought Project Hedra here. Do I get a Steam key?
Yes, if you bought the game then you will receive one via email when the game is released. If you donated, then it depends on the amount since there is a threshold.

You want to download the demo? It's not avaiable yet. Since you bought the game I want to let you know that I'll be doing a closed beta before steam and you might be interested in that. If so contact me on discord and send me the email you used to buy the game.

> Looking forward to getting in on the beta and spending some more time with the game, hopped in discord. To be honest I've spent very little time actually in game and more time debugging and abusing it more than anything.

Awesome to have you there, there are also people that prefer to hack/mod the game more than playing it and thats okay since I think thats also a big part of the game.

> Some of the most obvious were the game files themselves like items, mobs, etc. I've only just begun to experiment with modding some of these files, that should add a whole new dimension to the game[..]

Honestly I don't like people cheating but its a tradeoff I accepted when I decided to allow for easy modding via editing the text files.

Very interesting discovery,  I will look into it, however I don't think it's a high priority thing to get fixed.

> NPC is too generous

Yeah I am aware of this and I already fixed it in v0.45 ( the sky thing and the bug that he gives unlimited loot)

Like i said before, it's a tradeoff between modding and cheating. Most of the game is already obfuscated but there are some parts that I haven't obfuscated on purpose, because soon I'll be providing a C# API that would allows players to mod more complex things of the game like biomes and procedural quests.

With that said, I will look into ways of reducing the unobfuscated content or at least add some fail-safes to prevetn cheating.

Looking forward to see you on reddit/discord, and let me know of any other feedback you have :)

Nice man, it looks pretty cool and the angle you took is a good one too. I think people on the subreddit would appreciate this kind of stuff.

Hello there, I will answer to each of your points individually so as to make it more organized.

> It feels like a walking simulator, with little to do between towns and mobs, it just feels empty with [...]

I see, I hope to remove this feeling when the quests are added. I am also adding crafting so I expect these features to improve on this aspect.

> Walking everywhere is part of the game at this point but fast travel once you have discovered town is a must, its a quality of life thing at this point [...]

I disagree, fast travel would void the point of other features of the game that are currently in the game like Boats and mounts.

Thanks for letting me know, it has been already fixed on the v0.45 version (it hasnt been released yet)

> Control screen and patch notes mention a quest system. Selecting "T" does not bring this log up for me[...]

>Can't climb? Not sure if there are ladders

Climbing hasn't been added yet.

> I found quite a few but to be honest this game was fun to play around with. If you'd like to[...]

I am not aware of how to send a PM on itch.io so if you could write them here, that would be great. :)

> I'd love to see this game continue to develop, really great work.

I am glad to hear that. I assure you that development will continue, now more considering the steam page is up

Since it seems you liked the game and that you provide good feedback, because of that I wanted to let you know that I will be discontinuing the updates on itch.io and doing a closed beta until the steam early access release. If you are interested to join the beta you should join the game's discord and talk to me.

Thanks for the feedback, looking forward to hear from you :)

Yes, support for Linux and MacOS is planned but will be done while the game is on steam.

There is currently no option to change the controls, however I will try to add one when I find a time slot for it.

Thank you for letting me know of the crash, I think I just fixed it, and it should be out on 0.44.

Regarding the towns, I am currently changing the entirety of them so try to ignore the issues with the current buildings, here are some sneak peeks 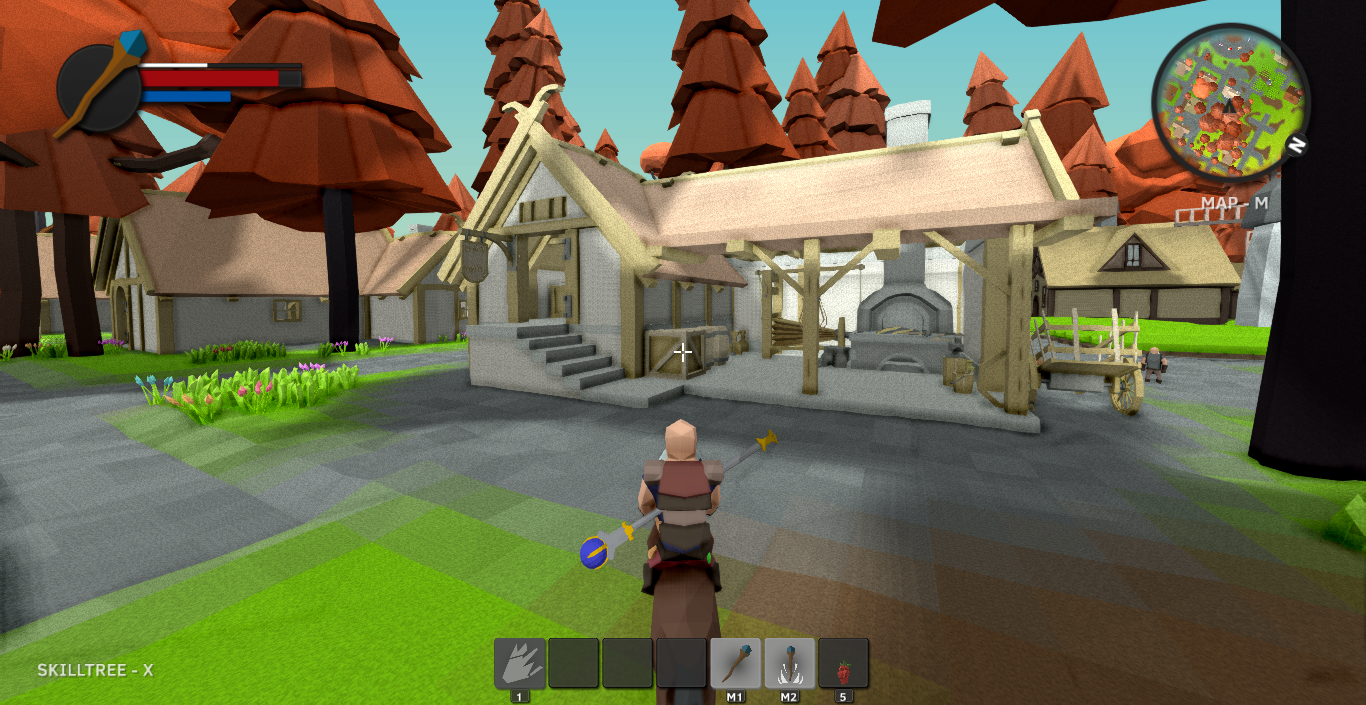 I don't understand with such a vague description, Can you get me a screenshot?

The game would crash or windows? if its the former can you send me the log.txt file?