Harvest Island
Take on the role of Will and help your sister catch a raccoon to offer to the gods.
Yobob
Adventure
Em-A-Zurvival
Arggghhh....
Yobob
Survival
Em-A-Li
Yobob
Interactive Fiction
The Chains that Bound Me
A lover's tale
Yobob
Role Playing
Y.B. Small Music Asset Pack
All you need in your video game! The Small Music Pack! Sheet Music Too!
Yobob
The Beast named Eliza OST
The Sound Track of The Beast Named Eliza
Yobob
Second Chance
A game about a man's journey of survival
Yobob
Role Playing

The author isn't polish. It's made in RPG Maker MV

There is no way I can do that physically. Or with the tools that I have. I added this demo in support of the Palestinian aid. It's the only thing I can do with what I currently have =/

it is made from RPG maker. Thank you for your support!

Thanks haha. I watched it. When you pet the animals, you're expending bless. Pet more, get more yield. The pets only work once a day. You can see it with the heart. Items respond, so there's no glich. It just responded quicker and I need to balance that. I really recommend finishing the demo. The ending will surprise you... because it's not a typical farming game. The story you're expecting, it's more than what you can imagine.

Play the first chapter of Harvest Island, an upcoming pixel-art, cute, semi-farming simulator set on a remote island. Take on the role of Will and help your sister catch a raccoon to offer to the gods. Inspired by Animal Crossing, Harvest Moon, and Rune Factory.

thank you so much! I’m actually releasing a demo pretty soon, so look forward to that! 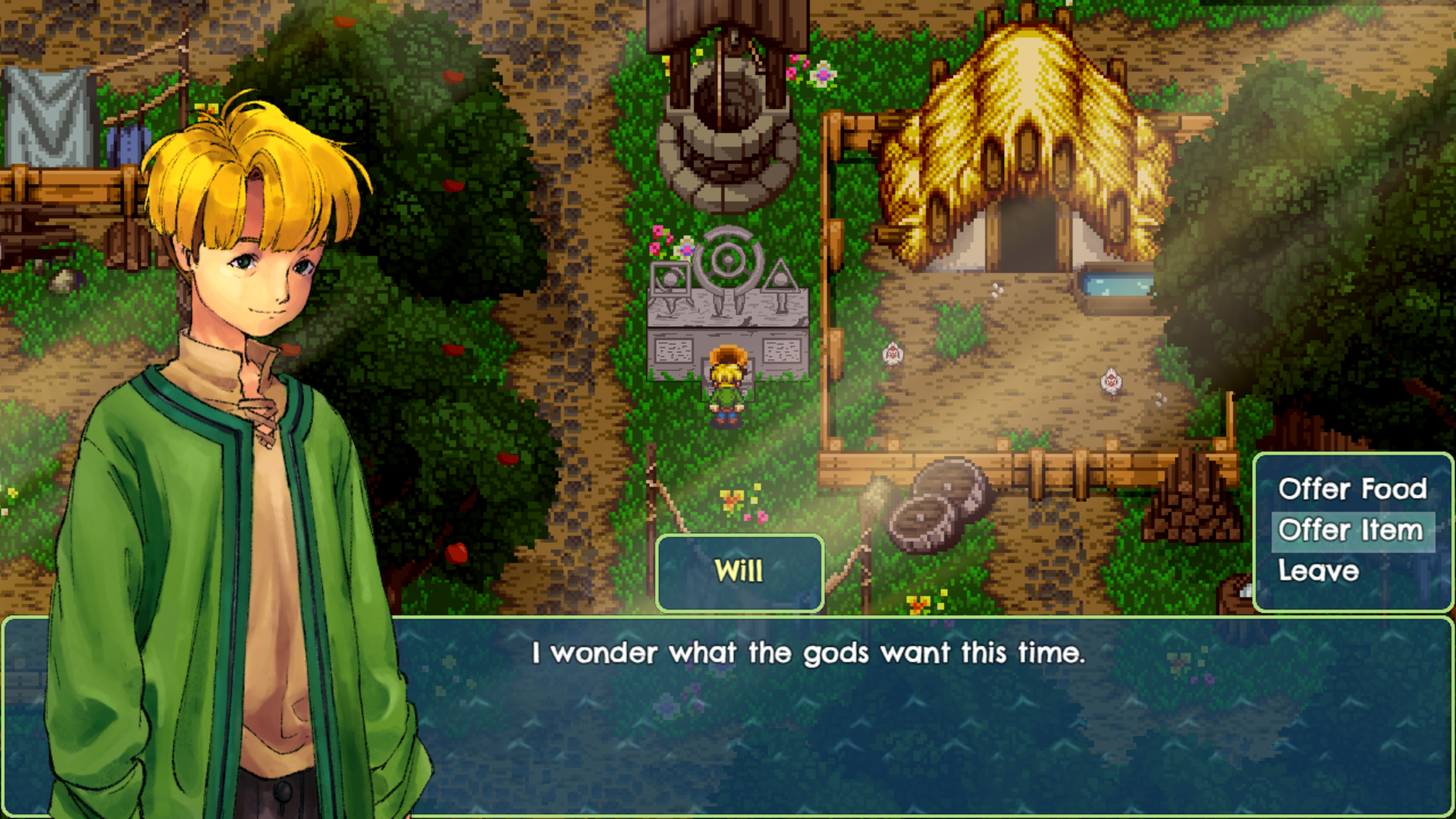 I've made a recent blog, Stardew Valley Animals and Harvest Island Aquatics,  of my game but haven't opened a itch page for Harvest Island yet. I will probably do it when I can get a good demo out to play.

Hey, I wanted to get in touch with you for an interview about your short visual novel game. Could you contact me whether through tweeter or email. It's just a few questions :)

Ahh dang it. It's a bug that I thought I fixed. I'd have to refix that bug. Try to restart the game from your last save. I think it should fix the problem or start a new game again.

The game is roughly an Hour long (Which is 10-15min of the demo). You can youtube my game and get a better impression on it. I made the demo a bit short because that was the best cliff hanger I could've done.The game is pretty much a horror puzzle game.

You should join the discord! I make other games to grow the fan base. It's a good way to gauge of my game development progression.

No, it is not. It won't be fully released until I get a stronger fan base and the financial stability it needs. So far, I have a long way to go =/

Can you send me a portfolio?

Hey, I could use a 2D character artist.

Here are my games I made and if you like to work with me, give me a try. My projects are short games but they are high quality.

Hey, to answer your questions,

Em-A-Zurvival is out! And released early!!!

When Andrew wakes up from his apartment, he is greeted by an unfriendly shriek. Oblivious to the rising epidemic, he innocently wonders around the apartment and comes across Frank…who is eating his wife. Andrew, horrified of the man-eating Frank, is stunned as Frank lunges at him with great force. Andrew takes out his knife and ends Franks life. His own guilt of killing his friend leaves him shocked. With what he knows now, he tries to escape his apartment that is now filled with man-eating humans. Could this be Em-A-Li’s doing? She is an A.I, new to the human world, that has been looking for Stu since her last encounter with him. Where is Stu now? Uncover the intertwined characters of Em-A-Li and Andrew as this story continues on from the game, ‘Em-A-Li.’

It would help me a lot if you were to support Y.B. I am a one man developer and that means I have to do everything in this company in order to make a fun game. Being an indie developer has a huge downside and that’s recognition, financial stability and the lack of a game developing team. I continue to make games but it’s becoming a real struggle to make this into a living. I do this because I love to make games and to see players reacting to the games that I make. I would be so appreciative of you if you were to buy the game. It lets me know that you want to see an indie developer succeed.

Add me on discord. I'm willing to work with you. Your art is great!

I'm actually Interested in Buying this asset. Do you have animated NPC to go with this?

Sent you an email!

I'm looking for a 2D environmental artist and an Animator for a short project I am doing. The project will last about 2 months.

Some of the Games I've developed.

If you're interested, send me your portfolio and add me on Discord

Can you link a profile of your art work? anything to show ?

Add me, I could use a SFX guy

Here are the game's I've made if you're interested in working with me.

Ahh prob a bug. After you talk to valentina.  You need to turn in 10 Iron to the building inside the mines. Then when you go out, pick up the dead miner and exit the cave. It'll turn dark. Then you need to pay the 10Kel to another building. Talk to the tax collector guy and give him the 10Kel. Then you can go back to your apartment or explore more.