PICO-8: Particles community · Replied to MBoffin in Need a license
Vedor13 days ago

I would recommend choosing a license. Any license. If you wish to give your work to the public domain, you can use for example Unlicense. Code without license is hot potato, because technically, at any moment you could add restrictive license, claim copyright, etc.

Btw, I would like to thank you for publishing a lot of useful and educational materials :)

Hey IceBox, any chances for a downloadable version? :)

Really cool game, one of the most interesting 7DRLs this year. Any chances for a downloadable version? :)

It's fixed with new version. Also I added some gameplay hints, and made it obvious when the player is actually hidden by changing player icon.

To stash the loot, you need to press the key for environmental interaction ([Enter] by default), then choose the "go back" option – then, your backpack should be emptied. If that's not the case, then it surely is a bug, and it would be a great help for me if you would send me the save file (basically every '.gob' file from the game directory).

Could you please tell me what version are you playing? Windows / Linux, Tiles / Text?

edit: I can replicate the bug locally too, it's hard to believe I didn't test this functionality! Thank you for your report, I'll publish the hotfix even today.

Hello, thank you for your comment and I'm glad you enjoyed my game. You are not the first who had problems with figuring out how to stash loot – I definitely need to make it obvious. Still, won't have time for that until the weekend.

Harmonist (and ThiefRL) was a huge inspiration for me (at some point, I was even experimenting with cone FOV), and while it's a compliment for me that About The Kid... reminds you Harmonist, I hope that I didn't take too much from these games.

Hi Fernofai, thank you for checking my game! Regarding the controls, there is an Instructions.pdf file with the game archive that covers game controls, and the README.txt file points to the instructions, too.

Also, good point about the full bag, I definitely should add info about that (tip for the other readers: just go to the hatch, enter it, and go back to loot the rest of the valuables).

You can hide only if Vikings are not in your FOV, or if they are unaware of your presence. Color of the player character has three possible shades: white (standing in plain sight), gray (standing on the tile that could be used for hiding, but someone saw you hiding there), dark gray (player is actually hidden). It could be more transparent...

Notes taken, I'll try to improve the mechanics transparency in the next release. Until then, I'll add info to the game page.

I'm glad the game was fun enough that you decided to figure it out by yourself :)

Played for an hour and no issues encountered so far. Thank you :)

This looks great! Are you planning to release the standalone, non-web version?

looks promising, but unfortunately I'm unable to run the game. Double click doesn't work nor running from the terminal. No error message, no stacktrace, nothing. I'm on Windows 10 64-bit.

Could you please help me with that issue?

A ja Elv :) Nice to see you - sticking with roguelikes after all these years :). Strange that I didn't notice it during playing Artifex Gladii, though.

I wanted to check your game, but unfortunately I can't run it. Window opens then closes immediately, without error message or stack trace. I'm on Windows 10.

I can reproduce it. All you need to do is run game under seed872, on easy, then move.

I tried to test it a bit, so - some 1. I can reproduce bug only under this specific seed. 2. Resolution and fullscreen status are irrelevant. 3. It doesn't trigger on medium nor on hard. 4. Herb naming style doesn't matter.

After reviewing process, finally I have enough time to check some 7DRL entries at my own. I heard good things about Quinta Essentia, and I wasn't disappointed. The first thing I noticed is Unity, though - and I didn't play good unity 7drl... Well, until now. I could write long post about game mechanics, alchemy system, graphics (even if it's based on existing tilesets), etc. But as most impressive I found how you managed, in 7 days, to make that big *and* polished game.

Ah, but besides compliments, I have bug report for you. It was my first run - I checked "?" already, dragged map here and there as well. I wanted to move right, towards couldron (but I wasn't bumping it yet). Animation started to process, but then game froze - I had kill it manually. No error messages, no log file created. I was playing in 1366x768 window, on easy, using slavic herb names; world seed: seed872.

edit: It's a long shot, but... are you Deaven from ADOM forum?

Thanks! :) Comparison with DoomRL is huge praise!

> I'm excited to look at your other work!

It's my best game so far. But I'm going to use RRT's mechanics in a bit larger project - I hope it goes well :)

>The bug appeared on the screen with victory text

Ah, I see it now! OK, it will be fixed in next release. Thanks for help!

>Is the number of enemies in each carriage randomised as well?

Yes, partially. Number of enemies is random within a range specified for each car. So, there are easier and harder levels, but some variety is provided ;)

There is no damage - every enemy has 1HP. It's accuracy what makes difference :)

I can't reproduce multiplying score bug, nor see the reason in code. Which screen was affected? With flavour victory/lose text, or with high scores list?

I added quitting game by "X" button, but it's going to be some kind of panic button (close immediately, save game) for now - until I'll implement submenu for handling this case.

Actually, there is no progression - except starting and final levels, the order of carriages is random.

And introducing progression through weapons is not likely. Don't get me wrong, I see the point. But it can't be done easily due to basic game mechanics. Enemies have only 1 HP, so I can't just buff weapon damage. There are other properties (accuracy, effective range), but I can tinker with them only a little - five shots off target in a row would be opposite of fun ;) ...on the other hand, maybe I could add new mechanics, like sawn-off shotgun with cone area-of-fire...

> a knife is very overpowered weapon, cause it kills emenies with 1-2 spabs

Similarly to revolver on medium (10-20 tiles) range and rifle on long (>20 tiles) range. But I have to agree that it's too easy to lure enemies into melee combat. ...what if enemies, aware of player, would shoot through doors, with accuracy penalty?

I hope you'll like gameplay as well ;) Thanks for kind words, mr hypnotic :)

Hello! I'm gland you liked it, and thank you very much for feedback :)

Because of time pressure, I forgot to include info about some keybindings in readme or in-game - I will fix it in post-campo release. To quit game during run, you need to use <SHIFT>+Q. To save a game - <SHIFT> + S. To close high scores screen, player needs to press <SPACE> or <ENTER> or <ESC>.

At first, I'd like to obtain more info about bugs. What version were you playing? What is your OS? How did you try to close window? Are you sure that you turned animations on? It's off by default as it doesn't fit architecture *that* well.

Generation of levels is kind of long story... Carriages are not always the same - I'm using template to determine their shape, and details are randomly chosen from prefabs. I think it would work well for some sort of semi-open-world game (I thought about "clean village from bandits" trope as well), but because carriages are rather small and symmetric, it didn't work out. All implemented (semi)procedurally generated elements serves fluff and flavor mostly. I thought about using "real" procedural generation, but I didn't have enough time. But it's on my todo list :)

More guns, and bigger differencies between guns, are also todo :) but not very high in priority. My initial goal wasn't about progress. I just wanted provide variety to gameplay - as enemies follows the same set of rules as player, bandit with Winchester rifle is more dangerous than one with Springfield. I don't know if I'm going to implement real progression, thought - due theme, this game has very limited scope. Yet, I like Old West enough to try implement somethign bigger in future...

First, I have to tweak RAWIG template. It worked well as 7drl architecture, but it was first time when I used it for real development, and I learnt what its flaws are. Performance of AI algorithm must be improved...

Once again, thanks for feedback and playing :)

It's finished! I had not enough time to polish start screen, and high scores, there are bugs to fix... But game is complete. I'm going to release more polished post-campo version as well. For now, enjoy:

I am really tired after 5th day of #7DRL. Earlier this campo, I wrote lots of crappy code, and its debugging is a chore.
But at the end of the day, I have animations (well, *sort of*... you'll see that train is moving, that's all), victory / lose screens and better msg log... And that's all what I really need - for now, at least.

On the other hand, I'm not overly pleased with Rogue Robs Trains. For me, small project like 7DRL needs two things: fun core mechanics, and high replayability. And as I'm happy with the former, RRT lacks the latter...

It's both nice and thoroughful (does this word even exists?) explanation :)

It all looks pretty impressive already, but after reading your posts, I'm still not sure what's the core of this game. What is (or will be), in your opinion, most important mechanics of Cyborg?

Not sure about your intention, but I think that "classic text adventure with graphics" would fit well.

Of course, I wanted to do much more today. In fact, I wanted to have finished game, ready for polishing process, after 4th day of 7DRL. It didn't work out, but I think I'm still good at schedule :) TODO: add missing messages; work on simple animation of moving train.

It's turning out great :) I didn't expect you are using drunkard's walk as core element of generator!

At the end of the day #3, I can't say I'm pleased. I should do much more! But maybe I pressed myself a bit too much yestarday, and I had to take a little rest... On the other hand, I had very nice talk with Brian Bruggeman, author of excellent font I started to use - Deferral-Square.

I was waiting for this info :)

Me too, two years ago. Unfortunately, life happend and I didn't release game for 7DRL 2017. Yet, I think this kind of crossover has potential - good luck, AquaTsar!

It's impressive, then! Good luck :)

Second day of 7DRL passed. I'm rather pleased with my progress - 75% mechanics and levels is done already. I hope that I'll finish it tomorrow - I'd like to have 4 days to polish release! 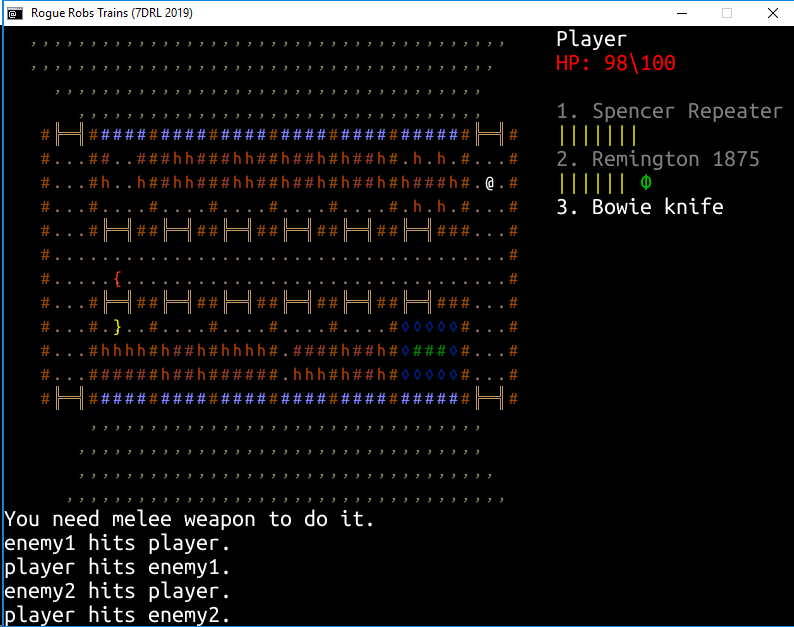