Finally I was able to beat it :D

If anyone is reading this: PLAY IT!

Here my notes in case you ever want to do a round of polish:

Artwork and Music are superb.

For most part you feel in control - snappy input.

Without your guide I would probably not known that the power-up gives a double jump - but I never read the manual that came with the boxes ;)

I wish there was a Coyote Time/Jump and Jump buffer as described here:

This is especially noticeable on the trampoline where it's hard to hit the right spot for a high jump.

Also I sometimes was able to move on the trampoline as opposed to jumping (probably when you fly in from the side). Intended?

I also feel that the double jump is sometimes in conflict with enemy bounces: I want to jump of enemies but instead I hit a double jump which just takes away my downwards velocity.

It would also be great if the camera anticipated falling - almost impossible to hit the moving trampolines - maybe the max falling speed is also too great?!

Dead foes float in the air when killed on platforms.

I noticed that the background art in Stage 4 (superb btw!!) is a little bit too contrasty in comparison to the foreground especially when playing on a big screen.

I had a weird jiggle when the enemy AI stepped on a block that disappeared due to me moving over it.

The angry falling bricks sometimes behave weird when standing on them (jiggle). Seems to only affect individual bricks.

Small note on the brown brick tile: the single pixel of the highlight is a little too obvious IMHO. Less contrast? Did not pay much more attention to details like this which means the artwork just "flows".

Game Over should end to Main Menu I assume? How about timer and highscore for speed runners?

That's it. Totally great experience. I also feel if you added +1 Lives you probably wouldn't need some many continues. It's worth playtesting the levels completely without any powerup to get a better feel when it's too hard.

But overall I felt it was fair - and was especially surprised how easy the boss is to beat.

Btw. the themes are just so good and do the 90s justice. Also like that the theme is not enslaving the mechanics/gameplay. That's the way to do it!

After sleeping a night over it, I must say - yes it totally is hard after the 2nd coffee :D

I had to fight hard to beat it. The platforms are killing it as you can not see them when you have to jump.

Will totally fix this if I make a post-jam version. Thanks again for the feedback!

Andrés, sorry to hear. I did not have a Mac to test. Will try to investigate and update the binary once I found a solution.

Reply
GBJAM 5 community · Posted in Micro-review thread: Review the entry of the poster above you!
StateOff5 years ago (2 edits)

Was looking at this for a while. Totally got into the mood and style when I saw screenshots.

The graphics are amazing, the animations very nice. Although I wished that the main characters were better visible against the background. Using the the mid color for the faces and sky only may have been wasteful. The outlines help a lot though! I just wonder if the overall visual was a bit easier to read if the background was one tone brighter.

This 2 player mode is addictive. It is a very basic concept of movement but it gives enough possibilities to develop strategic moves. The tension when waiting for your opponents move really fits the overall theme of the game. Good job, you totally deserve this!

The hit animations help motivating for a clear strike. Too much gore for my friend but I loved the reference to Japanese cinema gore in Lone Wolf And Cub style.

We had trouble distinguish a clear win of a session some time. Kind of felt a info screen was missing, sometimes on a rushed round we would almost oversee that the session was over. Also a winning screen, sound etc. might help motivating for the next round and gives the winner opportunity to cheer. Compare Street Fighter II and any other fighting game.

Also sad it did not have music or minimalist sound design to accomplish the stage. The sword hit sound was a bit too much if you ask me. Too loud and deep. I expected a "slice" instead, but this may be me. Please work on the sound, that would add a lot to the atmosphere of this game.

I hope this review was helpful and you find some time to address issues that you find apply.

Thanks again! You did great, I've took some extra effort to add credits!

Sleepless nights, but I am proud to announce: We have a panda!

Hope you are still up for the challange. Wrote you on twitter.

So much done during the last nights:

Let me know what you think.

I will need help with the music? Any recommendations?

This is my second jam. I must say I was rather successful on the first as I have eaten the spinach of gamejams:

It's a rather short book with various tips on how to keep focused, prepare for a jam etc. Without being groundbreaking it sure helped a lot.

Reply
GBJAM 5 community · Posted in How to post pictures?
StateOff6 years ago

I use imgur.com, then copy then image source and do the html thing.

Haha I love the moment when the CPU punches his buddie!

EDIT: I think the technical term is called "race condition"

Finally some butt-kicking action! I know you guys are visually bored so I'll do some real enemies and nicer backgrounds next! Stay tumed.

That's awsome Teggy. Bookmarked for after the jam.

Other than the jam I work on a SciFi gameboy-ish game, but it is far from finished. Check my stickied post on https://twitter.com/StateOffGames

Hm, undecided. Do you prefer outlines (first picture) or not? 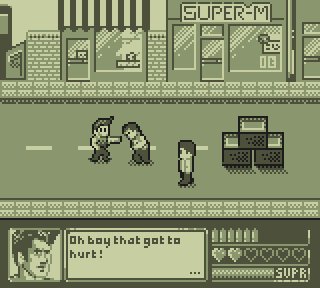 Feel free to follow me if you do not want to miss updates:


Reply
GBJAM 5 community · Posted in What is a program I can use to make 8-bit music!
StateOff6 years ago

I was exploring various options yesterday.

The easiest to make something usable from a non musician was beepbox.co

It has some scale presets which make it an easy option.

Reply
GBJAM 5 community · Replied to William Tumeo in What engine or language?
StateOff6 years ago

Disable threading in asset_library settings. There is a standing bug: https://github.com/godotengine/godot/issues/3662