Thank you for playing and your feedback!

This reminded me a lot of playing the Sonic Adventure games as a kid. There are a few bugs that caused me to die without timing out or getting hit, but I enjoyed the chaotic nature and high speed of the game. Having to playthrough a few times to really get a feel for the map and all the jumps was cool and the title screen splash art looked nice!

Thank you! That means a lot!

Really fun gameplay and use of the theme!

Interesting concept and cool aesthetic, but the game becomes unplayable after level 27 and def becomes more of a pixel hunting and random clicking experience after level 15

A lot of cute sub ideas and mechanics out of having each weapon having one shot! I often used the golden candlestick to clear most of the level though and only relied on other stuff when I would miss or to deal with more than one enemy! Fun and nice art for the time restraint! 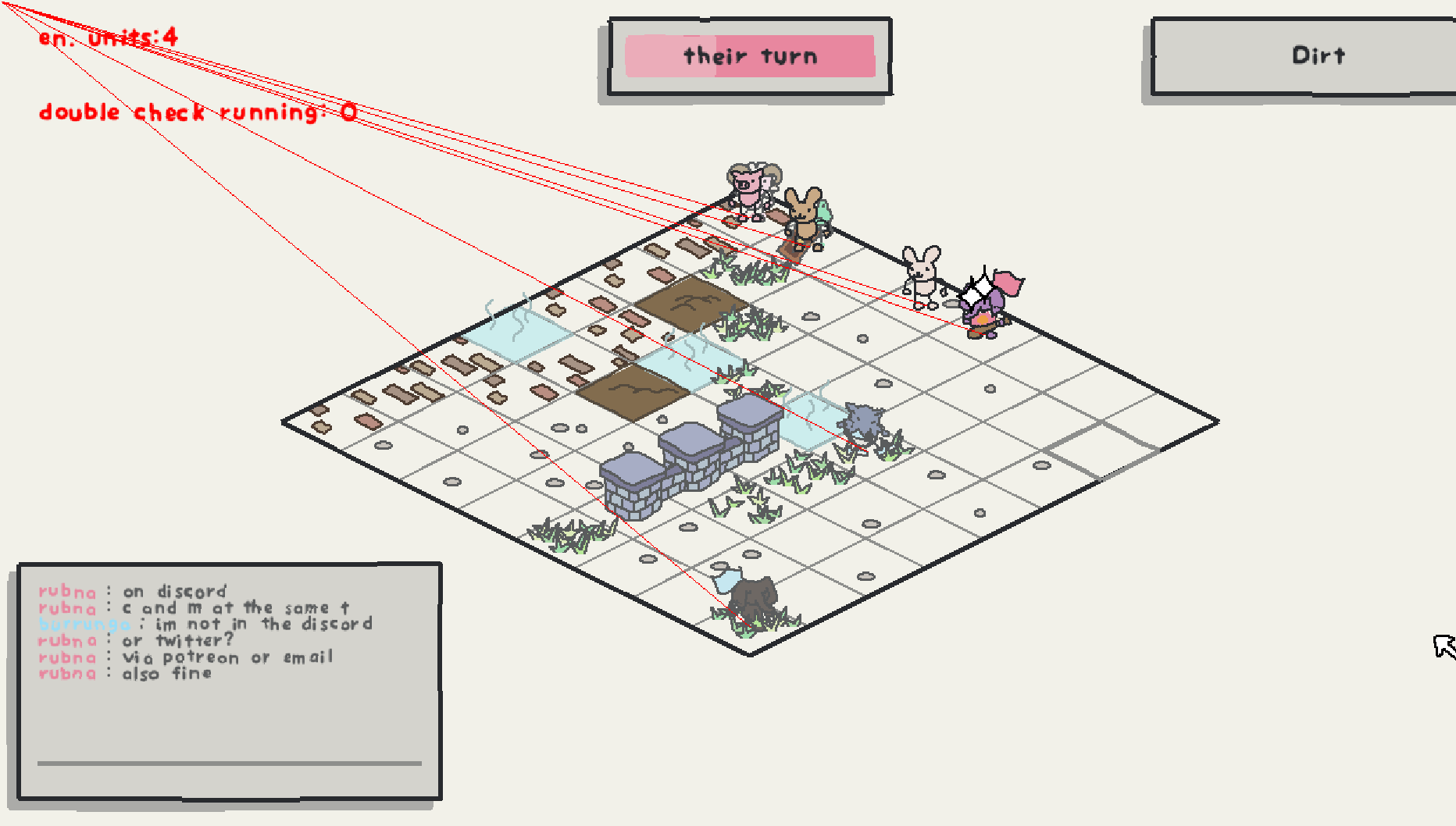 I often practice to gain coins when there isn't anyone available for a match and when I accept a match from practice it ends up with me having to reset the game in most cases.

However, worse scenarios have been encountered. A couple of times I played where my opponent had only 2 units instead of 4 and if I moved to the spots where those missing 2 were and reset, the game made our characters share that space. I could my move my units but my opponent could not move theirs. I just wanted to report this and hope not many others encountered this issue

Thank you for the feedback and constructive input!

Good aesthetic to it and interesting twitch on the villain theme! Nice work!

Your game had a wonderful look, but I found that the text and font in game weren't very legible. Thank you for including it in the game's description. I also thought the music was some of the best I had heard yet in the jam! I feel as if the game play itself is a bit confusing? I'm not sure if I'm just replaying or if there are actual levels? The aesthetic overall is really cool and more content would make it much stronger!

The game restart wasn't working for me so I kept refreshing. My score was 180 on my second try. I saw this was the first game you've put out(atleast on your itch account) and I think it is kinda neat. Definitely room for a lot of polish and mechanics, but gamejams are learning experiences and time crunches so I hope you enjoyed working on it!

I really liked the concept and see a lot of potential in what you've done. There is no denying that the game is fairly original in it's mechanics! However, I think the mastery of the controls had less to do with the concept and more to do with some mouse differences across the board. Maybe locking the cursor and focusing the game? I have two monitors so even when playing in full screen I was able to click out and ended up having latency from larger mouse moves.

Honestly, it is a really cool idea and art style!

Thank you so much for the feedback and kind words!

It is really impressive how much you accomplished. Sadly, I had a bug where I got my nose broken and it would dock me 650 dollars every day so I had to give up. I also feel that the car park is too long at times as I would go as fast as possible scanning the appropriate colors but the car would still be leagues ahead. Still, very impressive work!

This pleasantly reminded me of Papers Please! There is certainly room to expand this with more mechanics and either an emphasis on the time crunch or a totally relaxed strategy with impactful decisions! Either way, it was really fun!

Really great arcade feel and I enjoyed the various types of people and their unique effects! Nice work!

This was a fun and challenging memory and focus game. I played through and repeatedly got stuck at level 6. Really fun art and music!

This was definitely a cool concept, but I sadly couldn't get used to the feeling of the controls and a couple of areas got me stuck. I think if the lava was a bit slower to start and maybe playing with the idea of having more control middair? Congrats on your hard work and finished game!

I really liked the variation in movement patterns and assets. I feel like you could have made the bullethell aspects more intense as a trade off to the better precision of a cursor, as I've seen you discuss in other comments. I also understand that sometimes balance is really the hardest part when it comes to a jam and you had a challenging yet rewarding little game in the end!

I got a few letters twice in a row and I didn't understand the objective until I went and checked the gamepage. The character sprite was well done and I like the idea of climbing and jumping around but perhaps instead of putting the letters in the order they were collected,  it would be more fun just to have them fill in the spots of the word.

Certainly an interesting concept, but charged shots don't really do anything but create a larger blast so in most cases I just shot tons of smaller shots. The game is simple but also frustrating. A single touch from the enemy takes you back a level or two and it doesn't feel as challenging as it just sorta feels boring when that happens. I can see you doing more with this concept but it definitely needs health stats or something

You have a good attitude about it! Good effort and I hope to see more from you!

It was pretty cute and the art was nice but I wasn't matching all 4 but I was still progressing? Not totally sure how? In any case I thought it was nice but simple. Quick note, if I clicked play after winning, it wouldn't actually start the game again!

Yeah I was on a big Pikmin binge lately and wanted to see how well I could create a game like Pikmin in the time limit! It was a ton of fun! And I think it was smart for you to go easier AI rather than too hard of an AI!

Pretty simple all around but fairly cute and short and sweet

Certainly pretty but really not much of a game! Seems like a novel concept and some fantastic art style direction if you decide to keep going with this one!

Pretty fun RTS! I won but it is pretty easy when you just divide and conquer then close troops in on the enemy. I was impressed with the overall amount of models animations and mechanics you finished! Our games are actually a tad similar in some ways! Good work!

Sometimes landing on a box would kill me and sometimes it was the only way to survive. Kinda finicky and hard to play.

This was really creative and unique! Very well done! I like the platforming element to it!

I found the concept and the fact that you went for a multiplayer game very inspiring! I didn't get an opportunity to play online and without that I feel that it perhaps falls a bit flat. Quite a few leaps of faith and bullet sponge enemies. Still impressed with the animations and dedication to creating an online multiplayer experience in such a short amount of time.

Please include that on the controls of your game page! Gonna go back and play now!

I didn't really understand the purpose of what I was doing and I found the theme relevance to be a bit of a stretch. It seems like an interesting concept but needs a bit more

I pressed every button, clicked everywhere, but I couldn't escape the title screen.. Not sure what the issue was? I played at multiple different resolutions and got the same results. Sorry guys.

I was incredibly confused before and after reading the controls. I appreciate the originality and memes, but game done got did done broke. Good effort

Adding to description but I'll link it here too = D

I was able to get the blue man out of the game if I dragged him fast enough before the first level's tutorial image but I didn't intend to. Also I'm not very good at this game lol

There is a bug where if you go to the right and up in the second room you skip to the ending. Otherwise, really interesting!