hah so simple yet fun. the music makes it

Really clean and nice looking! I'll add it to my collection for the future. Thanks.

Thank you for adding a volume slider to the start screen! This should be required for game jams lol. The controls are hella hard dude

So many things just work. #shipit

I tried to keep this video under 2 minutes...but it ended up being more like 6 minutes. This just shows how the scenes were set up and how the game objects behave in Unity. Feel free to take a look at the game or even rate it

Yes that is exactly what this! Nice catch :) Definitely needs a win condition.

Wow very fluid in all respects.

This looks so fun for couch coop. Just wondering! Thanks.

"got back to home, probably" hahaha

Very responsible of you to add that suicide hotline info at the end.

if you wanna put your animations in a game, let me know :)

Yeah I got that too. I just left them all blank.

I don’t do art or music, but I do unity. Hit me up

looks great! im gonna download them in case ill ever need it!

This post was a good read! I'm looking forward to seeing more updates

The computer is way too good at pinball haha

Really cool. Theres a lot of funny stuff in here. I did get some issues that it disconnected when I pressed throttle.

Very nicely done. It took me a while to find the controls are part of the level's artwork.

I think this was a great idea. Stay relevant!

I just wanted to add that I took this devlog, and continued it on my dev blog website. 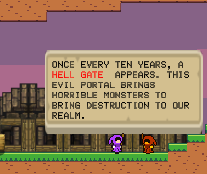 The game is ready to play in your browser!

I added ALOT in the last sprint.

3-4 sections that I'm going to call "stages". The game is still one long stage, though.

I changed how the first enemy behaves.

Added the Hell Gate encounter with a final boss.

Score + grade at the end to see how well you did.(Yes, there is a Super rank if you do well enough :P )

And a replay option in case you wanted to try for a better score.

It is surprising just how much a few coins will make a stage funner to traverse.

I went back and re-coded a lot of the way the controls are handled. I wasn't very happy with the way controls felt. It was hard to land on very small platforms. The first goal of this project is a failure if the controls don't feel good. It still needs a little bit of tweaking but it is definitely a lot smoother than before.

The original sprites for the platform tiles as seen in the older screenshots had to go. Their original sizes were way too big. If I wanted to stage to look at least half-decent, I had to use a tileset that was much smaller. I found and started using a new tileset.

There are now "coins" as a collectable. They may not stay as coins, but they are serving as a perfect placeholder. It is surprising just how much a few coins will make a stage funner to traverse.

The first "stage" is completed and ready to be played. It is pretty easy to complete, with a few alternate routes that you can collect some extra coins.

If you look at the GIF in the top of this post, you'll see the character walking back and forth between sign posts. If you haven't guessed it already, those are checkpoints! You can't see what is happening behind the scenes, but it is also setting the player's "respawn" location when you activate the most recent checkpoint.

Also, I threw in a pretty nifty audio manager script that I picked up from a YouTube video. So now there a simple and efficient way to play sound effects and music.

I've been streaming my development on a twitch channel that I've set up as well. I have no idea how Twitch works as a social network, but I think following will let you know when I'm live? It's just a screen capture with some music in the background.