The Shape of All Time
a synesthesia comic
Potatofuzz
People Can Learn Their Whole Lives
an evolving poetry zine
Potatofuzz
I Wrote These Poems At Work
And I Posted Them Online
Potatofuzz
Pivot
A slice-of-life softball story
Potatofuzz
Shocked Existing
Comics and Poetry (and Awe)
Potatofuzz
I Would Be Just Me
A Zine of Weird Gradeschool Journals
Potatofuzz
Scaredy Cat #1
A Zine About Weird Fears
Potatofuzz
Flirting With Death (Ver: 0.1)
An Apocalyptic Dating Sim
Potatofuzz
Simulation
The Nestle (beta)
The afterlife is a pretty nice place.
Potatofuzz
Role Playing

Enjoyed it! Especially the singing!

I got this game 2 years ago at GenCon and I SUPER love it!! My friends and I played about 2 episodes (we are slow). I like the cliffhanger mechanics, the character tropes, and the way that stats & moves are connected to each other. It was challenging to find ways to put the mystery together without a plan & the friendship/relationship mechanics were a bit unclear to us. Regardless, I love the vibe of this game & the length of the rules is great for me. (lol). PLAY THIS GAME!!!!!

KJSHDKSHDKSJH YOU'RE TOTALLY RIGHT i was mixing my years up....i tabled twice.....

This is PWYW, normally $8, thank you for doing this.

"Now people copy its aesthetics, its rythm, but the experience is lost in the sea, its praxis feeds right into capitalism."

"I know just how to

impress everyone but my
so called family"

Here are some lines that HIT me:

"Let them try to collect my
bug heart, Lord."

lovin that swarm of bees

Sorry for being so silent! This whole second week became a weird mix of Actual work things happening, family things, friends visiting, and everything being too warm in general. I'm working right now on getting a bit of the game in for the deadline, and then will probably update it soon soon after! :)

Work week started again, but I've been putting more dialogue into the script, with notes on sounds effects. I'm realizing how much facial expression changing is to me, because the scenes become so much clearer and more animated even with a small mouth change. I think my new goal will be to photoshop enough expressions for these scenes! It's a bit harder with scanned in art, because I have to keep it looking painted. The entire Chapter 1 might not be done, but it will probably be more fun and coherent to get through with expressions.

Other notes: It sure is hot out right now.

ahh cool i'm excited to check it out! 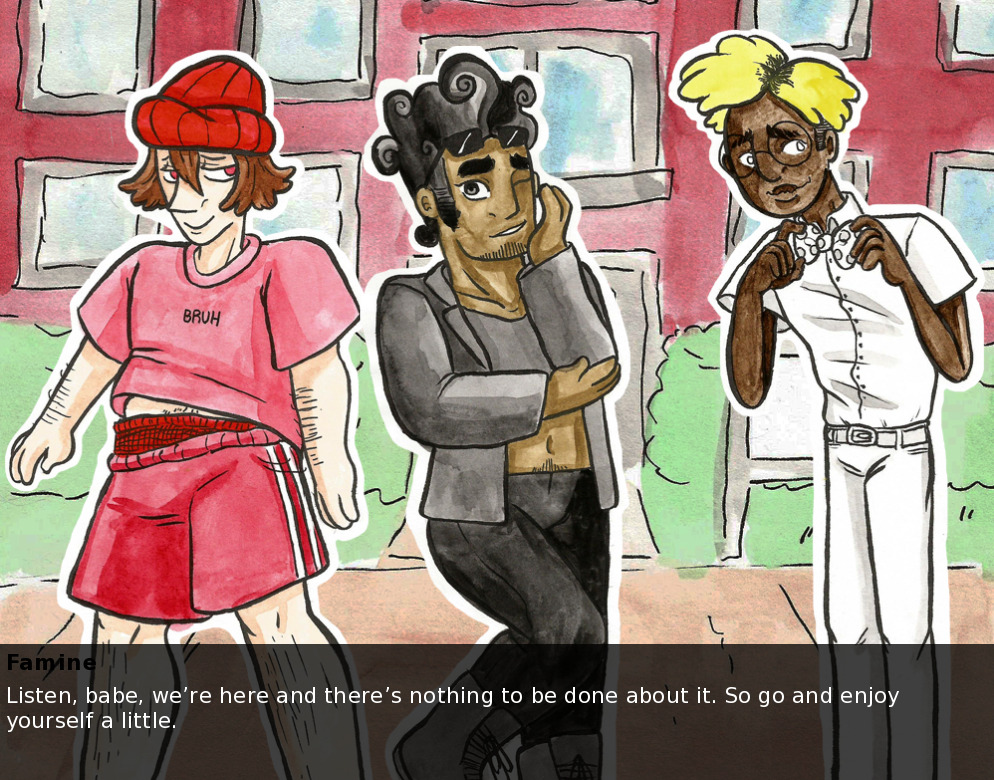 Hey everyone! I've been painting a lot. A lot. All of the characters have one sprite (other expressions will be edited on later) and I have a handful of bgs and cgs for the story so far. Having some contrast issues with this scene but I might make the background duller. Once I get the story out, I want to add pauses and flair to the text. Also, haaa, Famine's name will probably have to be light gray.

yesss look at all these cute characters. they are important to me

I gotta get ready for many image resizing ADVENTURES other updates from today:

Tomorrow i'm off work so I'll probably work on getting the characters and flags defined, and also perhaps get the first scene sprites ready. I also want to edit the menu styles, I'll probably do a bunch of misc paintings to get textures and little skull drawings from. Goodnight!
Reply
My First Game Jam: Summer Edition community · Posted in [Dev Log] Little Red
Potatofuzz3 years ago

excited abt this! good luck

I used VX Ace for the last jam so if you run into any issues I might be able to shoot some scripts and answers your way! A good thing to do with sprites is take a sprite sheet from the base resources in VX Ace and make your sprites over them.

Eileen has great taste in music as well

i'm suspicious of that cat

Another work day more busy than usual! So I was tired.

One more day of work and I'll be able to rly get in on this project. :)
Reply
My First Game Jam: Summer Edition community · Posted in [Dev Log] Soul Food!
Potatofuzz3 years ago

lovin the eyeball cutting board. excited to try this out??

Aaa the scrolling background reminds me of Animal Crossing

thank you! i'm trying to make everyone distinct

THX! the idea/story itself is vince's, i just suggested we bring his play back. i'm v excited. also getting to stop and paint is a nice break from the computer, even with the extra effort of scanning a lot of things.

HeyyyOOO I had quite a lot of work today, gotta love them deadlines,,

Today I mostly did some character design concept sketches of the four horsemen + all possible Love Interests (ooooh! <3) 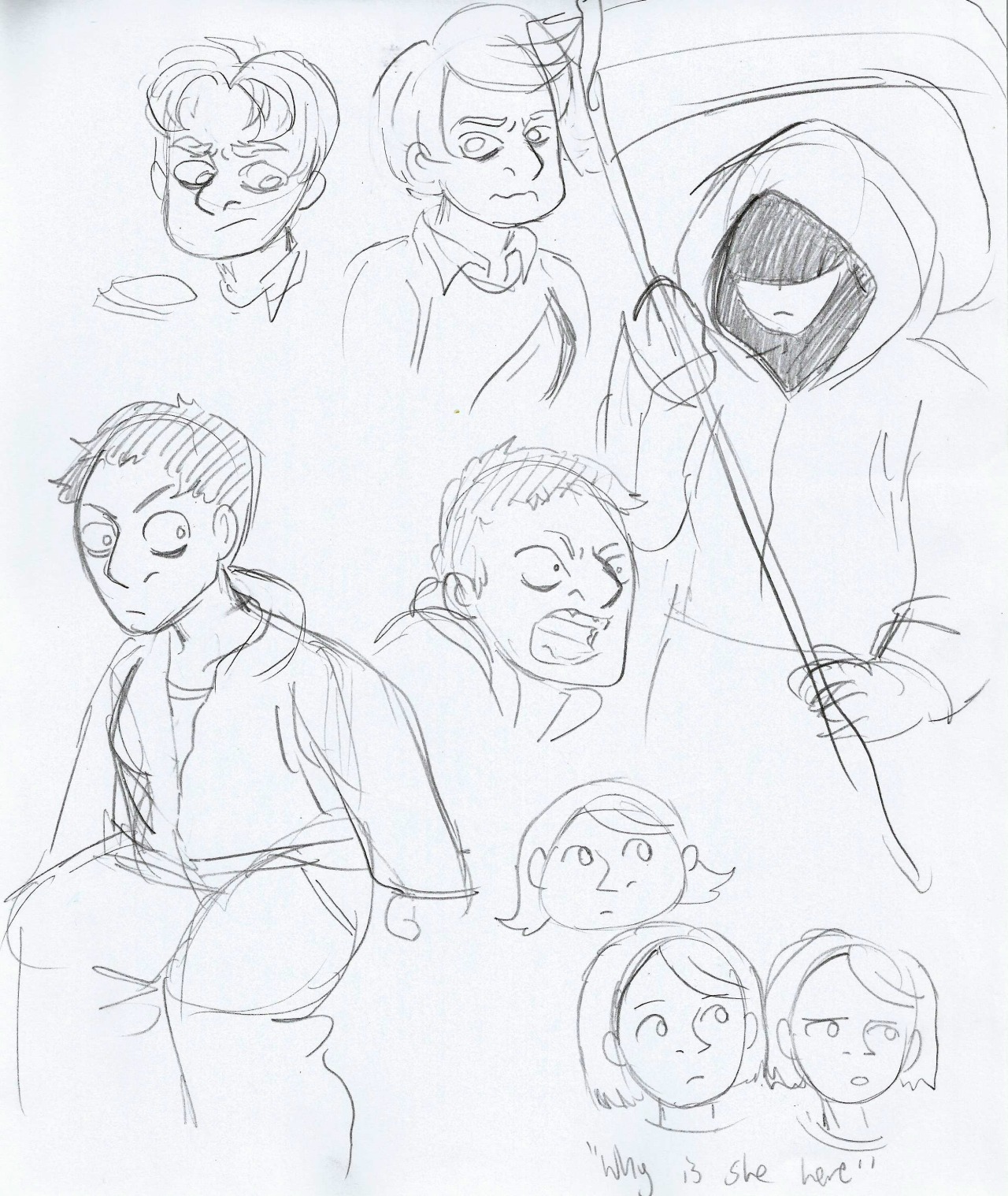 Sketches of Death, which has been tricky, because I played her role in the original play and I'm trying to not make her look like me. Earlier sketches were way too similar but I think I'm diverging! Also, Beatrice is in the corner. I wonder what her deal is! 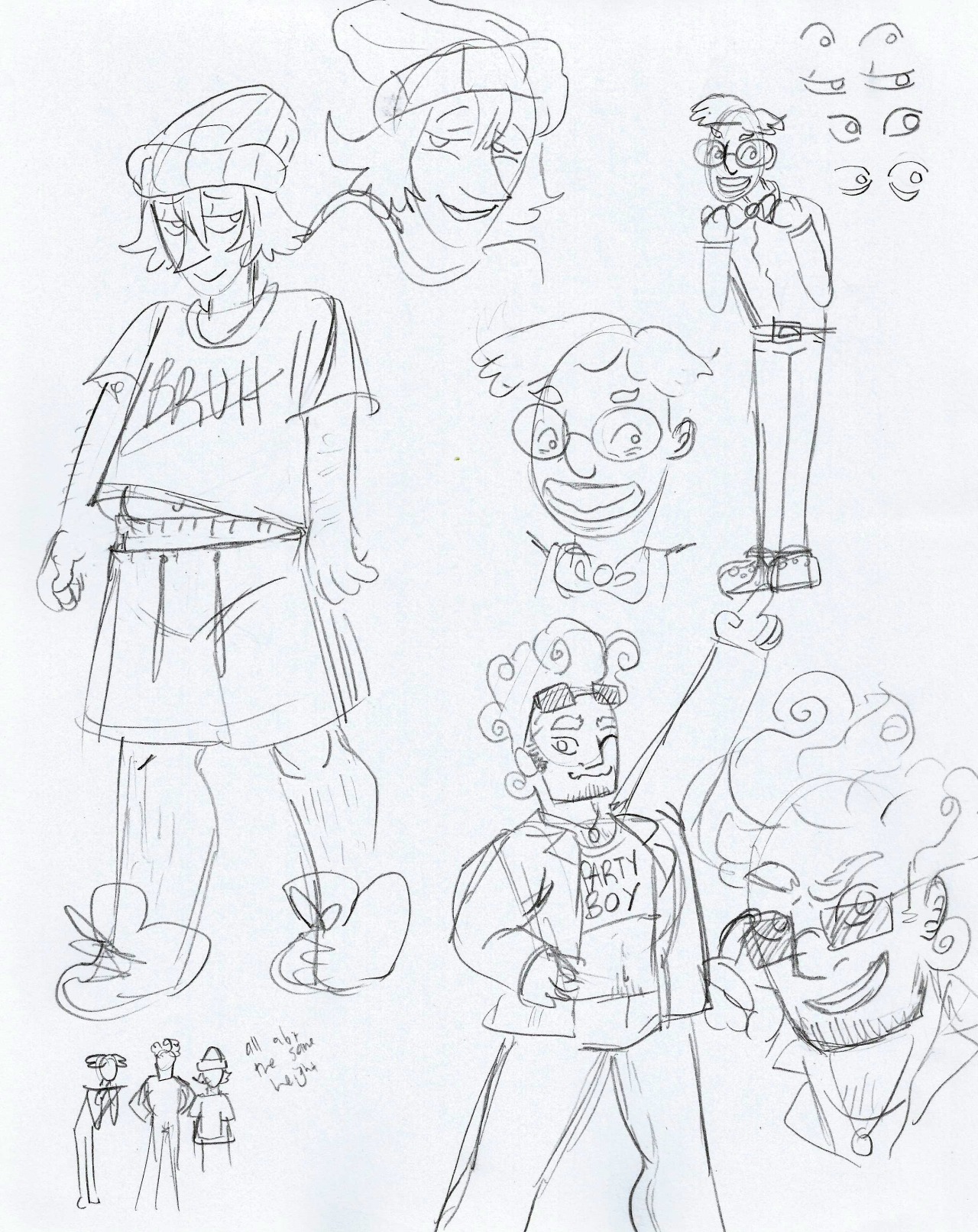 Here's War (in the beanie), Pestilence (in the bowtie), and Famine (in...that hair). I also tried to stick to but also deviate from the people who played them in the original play. It helped make them pretty funky. 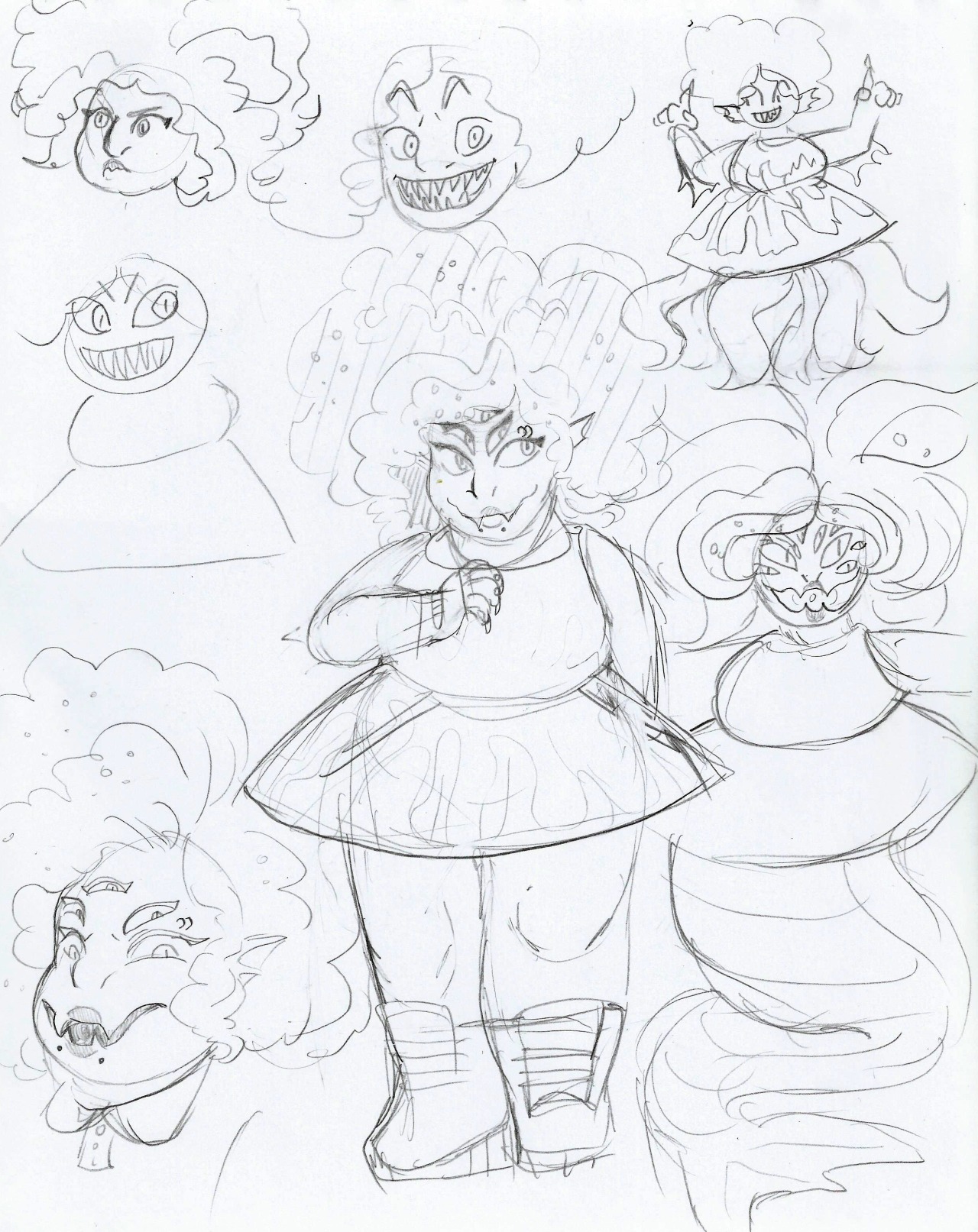 Vi! One of the date able characters. Her middle eye has winged eyeliner on both sides and it's important. I worry about being restricted with expressions by her mouth, but also I want to be more monstery than not. Michelle, another possible love interest. She's a buff angel. You'll notice both of the last two girls sort of have a more and less human form. There could be possibilities of fun expressiveness that causes them to transform into their more "true to the being" forms.

NOW for kinda test sprites! I want to do this whole game in traditional watercolors, which will be a fun challenge, probably especially with sizing. So, while getting a feel for these characters I painted these. All colors (and designs) are currently unofficial as I did not blend any colors. 
Ok it is time for me to sleep! I have another busy day tomorrow. I'll probably just make test colors of the other characters. Can't sit down and get into a good meaty session until Thursday. See you then! Good luck everyone!

one of our "RAs" lmao