Fishing With Dad
Enjoy a peaceful day on the lake with your dad. Catch a big fish or just bond over a beer. The choice is yours
pmprog
Tigermoth
Bullet hell on the GBA
pmprog
Shooter
Desktop Labyrinth
Discover the hidden labyrith beneath your desktop, but beware of what lurks down there
pmprog
Adventure

I agree with your points that need addressing. I'm not sure if I will put any more time into Tigermoth, but I will certainly consider them if I do come back to it.

I didn't get that far in my play, but a good reason not to wrap. I agree the bounce might be less jarring than a dead stop though

Ah, that explains it! Thanks

Well polished top-down racer, I'll be coming back to playing more of this :)

I got stuck on the third level for a while, because the block was dropping in on the top side of the chasm, so I didn't know what to do with it... However, after I got it figured out, I can't seem to replicate it, so I'm not sure if it was a bug, or if I just was doing something different and didn't realise.

I dig this puzzle platformer. Definitely one to sink a bit more time into

Make sure you get other peoples advice too before you tinker too much. It could always be that I'm just really bad.

This was my biggest hurdle, on the second "screen"

I saw the disable, but yeah, I was more just scratching my head wondering why my firemen weren't dashing to the blaze :)

It is really good and very polished considering the time constraints

Thanks for the feedback. Well done on that score. I think that's the highest I've seen!

In all honesty, I totally forgot sound effects were a thing... sounds dumb, I know, but there you have it. And yes, I suppose there should be a pause button :)

Reminds me of the old LCD games. Feels a little slow, but not sure if it speeds up later in the game

I didn't make it very far, it's a tough platformer. Player seems a bit slippery, but with the blue caves, I'm guessing it's supposed to be icy?

Well presented puzzler, but pretty complex, and needs quite a bit of thought

Not really sure what the goal was, and if you aim straight down, you can get in an a "soft lock" where your puck never stops moving from bouncing off the pink thing, and thus can never take another shot.

Could turn into a promising puzzle game

Looking good, took me a bit to understand what I was doing, but interesting little puzzler

Though in my city, a fire started, and despite having a firestation, the fire basically wiped out a good portion of the city, and the firecrew did nothing. Was I supposed to activate them somehow? Or are they supposed to respond on their own?

Nice little story, and yeah, the animation/video is great

Only had a quick round on this, but neat little shooter. It felt a little weird hitting the "edge" of the map, it might have worked better wrapping.

Definitely one to replay with more time

I didn't get very far on my little playthrough. It might have been better to give the player the option to eat the mushrooms or not. Because naturally in adventure games, you click everything; so after going to the fridge and eating mushrooms to then get a message saying "Don't eat them", well, it wasn't much of a choice.

As a fan of FTL and Convoy, this is right up my street.

I've not played too much yet, and don't get very far, think the difficulty curve might be a little steep. For the first few goes I came across a ship with a missile and they killed me instantly. Then I learnt how to access the build menu, and built myself a missile launcher, but they still beat me

On the next run, I built cannons, which let me shoot them down first, but the second ship I came across then had a massive bulk head, two missile launchers, both with forcefields above them! Their first barage took out my missle launcher, so basically I was stuck with two cannons hitting the bulkhead and got flattened by the next missile attack.

Definitely one to play again

It's a good little puzzler!

This is really good! I can see me playing this more

Nice little game. Only minor point, everything operates off A and B buttons with the exception of the very start of play, where you need the Start button.

Would it be possible for your to change the compass so that the N and S are rotated (arguably, you could ditch the pin then). Not sure if that would make it better?

One of the early tactics was to just run straight up to the Tigermoth and unleash the secondary fire, so I did have to look at pushing the player back.

Yes, the difficulty curve is a bit rubbish... though to be fair, I never got past level 4, I don't think, so who knows how playable it is beyond there ;-)

My main issue is that it was quite hard to read, and for a visual novel that's pretty important.

Even though there's a black drop-shadow on the text, the actual text is white, and it's in a light grey box with a generally white/light background.

If you'd had the dialogue box a dark grey, the white text would have stood out better

Only given it a brief play so far, but nice well rounded product

I think your compass points in the wrong direction. When I press right, the compass point seems to rotate left.

Couldn't do a bigger window, because that was the limitation of the LOWREZJAM.

As it was part of the jam, probably not going to do anything else with this now... 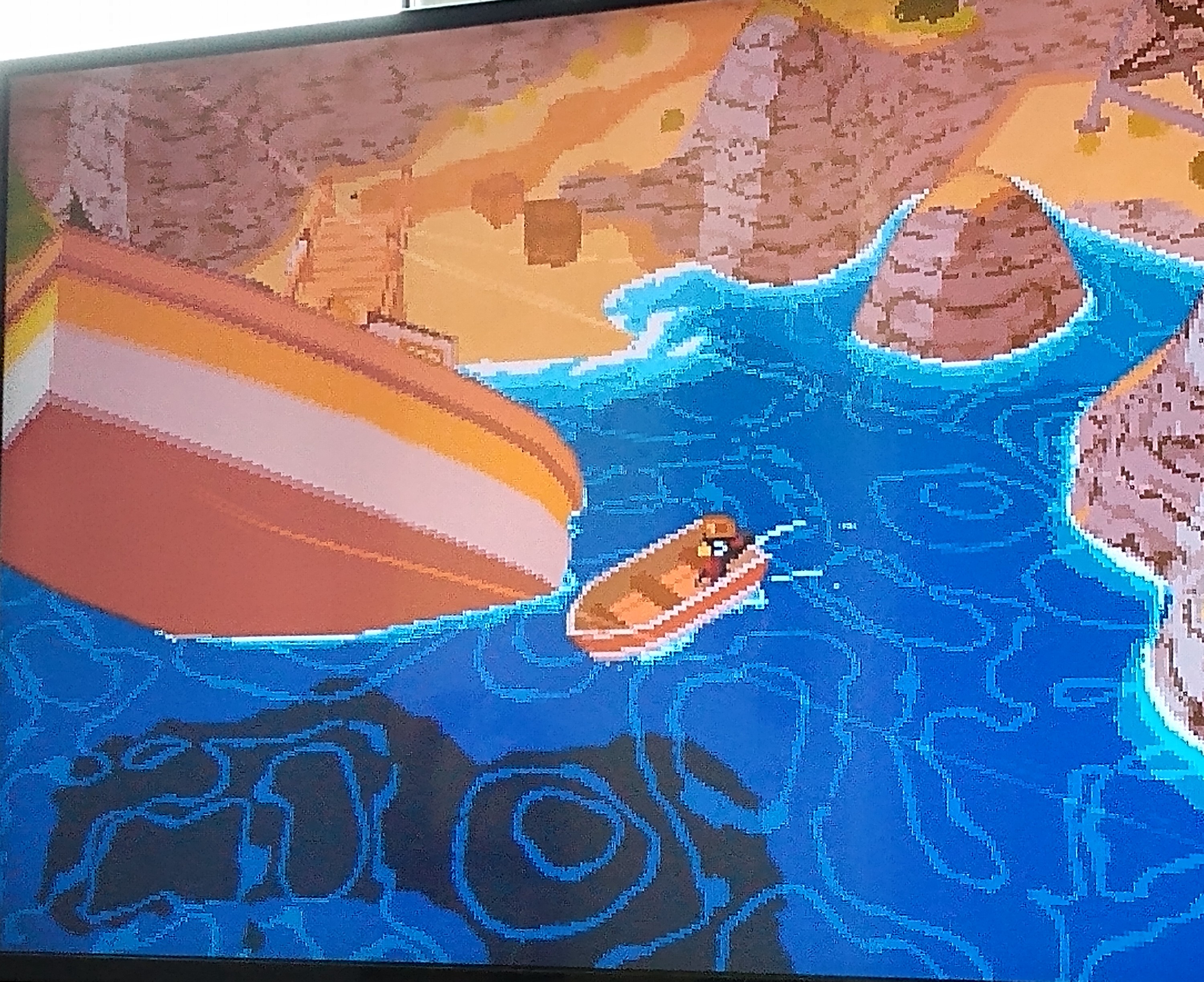 It's great fun, your collision with the fishing boat is a little wonky though.

The man who buys your fish casually sat through the carnage whilst my son sank his boat :-D

Looks good. Shame there was no music; and I was also a bit unsure my attacks had done anything at first. Despite a popup showing icons before the attack, a popup showing the modifiers after the attack would have been a nice little touch.