Keep an eye on our page to make sure you know when we update, we'll be more than happy to have you play our game :)

Thank for the review! We'll definitely look into your feedback when we decide to continue developing the game! Thank you for your 2 cents!

https://oneartplease.itch.io/drunk-and-sailing
Fun pirate rhythm game that you play with a controller

Really fun puzzle game! Def took me a while to figure out! Kudos!

Great little game, I had a lot of fun figuring out the puzzles!

Hey there! If you find any bugs post them here. We'd really appreciate it.

I wanted to let you know about another iteration in our game called Space Transport Explorer!

Space Transport Explorer is a game where you get to explore the vast galaxy (of a thousand stars) and craft the inventions of your lost father in order to unravel what happened to him.

Check out the changelog for information on what changed since the last release.

We're currently working on setting up the main mechanics of the game, but got to a point where the game is playable.

The galaxy is exploreable in this state and crafting is also available (just not to the extend of the finalized game).

Check out our game here!

If you're up for chatting about your experience inside the game, feel free to comment in this thread, send me a personal message or post in our forums.

If you liked our game, please share it with your friends! We would love to expand our playerbase and have more people loving and playing our game. 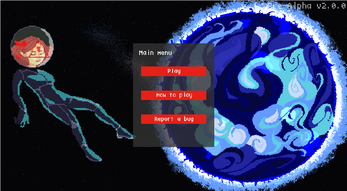 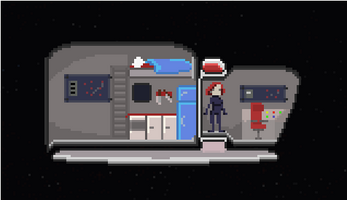 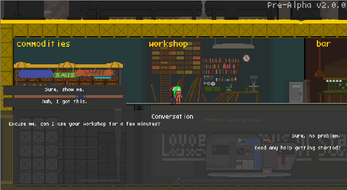 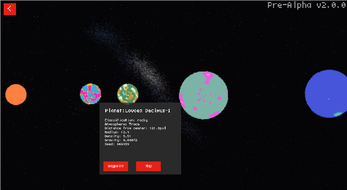 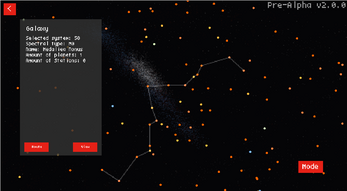 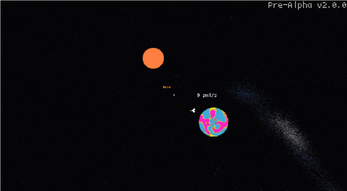 Thank you for your feedback, it helps us better shape out the game and make it more enjoyable for everyone.

Your feedback touches on a subject not a lot of people have thus far, and that is not understanding the game.
I want to remind you we're in pre-alpha, so the game is in a playable state, just not in a state that is to be considered a completed game or something that should be finished in any sense. If anything, it should be considered an early-access tech-demo.

With that being said, your feedback is still really valuable, since you gave us a look at what a player expects from our game and what they found. I agree the goal of the game seems unclear at this point and it is something we're working on.

The spacebar bug you mentioned isn't supposed to be there, but those mechanics aren't fully polished at this state.

The game does feel limited at this point I can agree with you on that, however we're currently working on incorporating more fun mechanics and a clearer purpose inside the game thanks to your feedback.

Thanks again for your feedback, stick with us and stay tuned for the next update (feel free to share this game with your friends!).

Check out the changelog for information on what changed since the last release.

We're currently working on setting up the main mechanics of the game, but got to a point where the game is playable.
The galaxy is exploreable in this state and crafting is also available (just not to the extend of the finalized game).

Thanks for playing and stay tuned for the next update!

I love your thorough review as well as your kind words.
We're currently working on version v1.1.0 of the pre-alpha right now with randomly generated planets as well as a basic dialogue system, so those should add to the immersion (and story later on).

I also want to thank you for trying out the game on multiple platforms, as running into issues like the "MSVCR100.dll" is important for us to know. The issue might be caused by the underlying NekoVM platform that we're using to compile our game to Windows.

I want to, again, thank you for your time and hope that you stick with us throughout the project.

Stay tuned for the next update!

Thank you for your response!

It's good to know that the pixel art is appreciated. I'll be sure to post following releases on this forum as well, being sure not to spam too much :D.

Thank you for your feedback, it means a lot!

I would love to work and focus on things like immersion, we're also working on a story that would guide the player through the galaxy.

Hey guys, I wanted to show you guys a project I'm currently working on with my girlfriend.
It's called Space Transport Explorer. Set in a large universe, you can travel to any system or station and craft items based off of stuff you buy in different stations.

The game is a very early stage of development (Pre-Alpha) so please help us out with feedback or let us know of any bugs you might find!

Have any thoughts to share about the game, good or bad, you're welcome to share them in this thread.

Feel free to report any bugs to this thread when you're running into them.

With:
(1) being Aluminium Bar.

Since the game doesn't have a tutorial or any game mechanics to explain to the player how the game works, I've taken my time to write up a small wall of text explaining how our game works. You don't need to read this entire page in order to play the game, feel free to just start up the game and start playing and reference this page when needed.

The way the game works and the controls are subject to change!

Controlling the ship while traveling


W, S: Increase/decrease throttle.
A, D: Change ship's direction
Left Control: Reset throttle to 0 (braking).
E: Jump to next starsystem in plotted route. (The player must have a route set to do this)


Controlling the ship while docking

Interacting with the ship.

Interacting with the ship can be done by clicking E at several locations in the ship.


If you want to do cross-system travel, you have to plot a route to that system. You can do this by interacting with the map in your ship. Once in the galaxy map, you can select your preferred system. If you need to select a specific economy to fly to, use the Q button to toggle the map to show system economies.

Once you've selected your preferred system, click the route button to plot a route. You'll see several lines going through multiple systems. This is the route you'll take! If you see one of the lines in red, it means that your ship can't handle the jump distance needed to go from one system to the other.

If you click the View button when selecting a system, you can go into the system map. Here you can see all of the planets in that system. In this version you can see which planets have a station by a red pixel on the top right of the planet. Clicking the planet will spawn an info panel with planet info and a waypoint button. Clicking this button will make a waypoint for this planet once you're in that system, this action will not plot the route for you.

Once you've plotted a route, press the Escape button to leave the map. Now move your character to the cockpit of your ship and press E to control your ship. You're now flying through a system and you'll be seeing an orange arrow pointing you in a direction. In order to jump to the next system, you'll need to go into the direction of the arrow at max speed (1.1 px/s) and press E to jump. You do this several times based on how many jumps away your target system is.

In order to board a station, you need to arrive at the planet where the station is located. The station will always rotate around the planet at a small radius from the surface. Either explore the planet's radius to see it or wait a while to see it come around. If you want to board that station, collide with the grey sprite representing the station at a low speed (< 0.4 px/s).

The player can interact with several things in a station (in this version).

Crafting is in a very early state.

Crafting is Minecraft inspired, so feel free to experiment.

Check out the recipes thread for the recipes available in the current version of the game.