One bug (well, also): The Mac binaries aren’t set executable. Did a chmod 777 VeinsOSX/VeinsOSX.app/Contents/MacOS/Veins and then I was able to open the app. Same in Writhe.

Perfectly atmospheric environment, very interested in seeing where this goes.

I’m really liking this one, and started using it in a little (Halloween? Maybe.) roguelike!

It would be nice to have monster animations, even just 2-frame bopping, tho. And the Mimic doesn’t look much like the chest, which is kinda weird?

Works, it’s cute, but yeah, nothing but a pile of red cubes. My stairway down was too vertical, so I dug a less-vertical way back up, but it’s still very messy. Fine block digging/placement and an inventory (2 counters for grey & red) would be nice!

Updated version 2.1 to have a difficulty level! Try playing on 1 or 2 at start, it’ll increase when you go down stairs.

Hi, buddy: I’ve got another update, but anyway I made mine public: nanorogue

Show inventory icons on-screen, or check off items on the list.

It’s not always clear what things are interactable, or doors will be blocked invisibly, and then they’ll suddenly pop up an interaction which goes by too fast. Can’t re-view the photos, which can make things difficult.

Was there stuff in Room 6, or the trailer park doors I couldn’t re-enter? Music box played very slowly, not sure if there’s anything to it?

Love the ending, it looks threatening but isn’t.

version 0.9.2 now has sound effects (always in Firefox or Chrome; workaround for Safari sometimes works), and fixed being stuck in a New Game dialog loop.

version 0.9.1 is up, many bugs squashed, text is sharper, input should be more correct. There is a global cooldown now, so your deaths are totally your own fault, not sticky keys.

I’ll be updating that one every few days as I make improvements. Already it has much nicer levels and structures.

I completed on time, and have a nice playable game. But there’s still much to do!

Posted my Retrospective last week, and I’ve finally recovered/had time to make some progress on the post-7DRL version.

Got back to adding missiles and fireballs! Done! Ship it!

(Levels still kind of suck, I’ll improve those later. But the gameplay should be finished.)

Exhausted, I don’t ever work this many days in a row anymore. So I got the overview map done, and rebalanced it a bit more sanely. It is playable and a fun challenge until you get curb-stomped by wights or stuck in a dead-end world.

I have until tonight (Saturday) at midnight, so if I feel up to it later I’ll get to some of my TODO list.

Playable version is up now, let me know what you think! 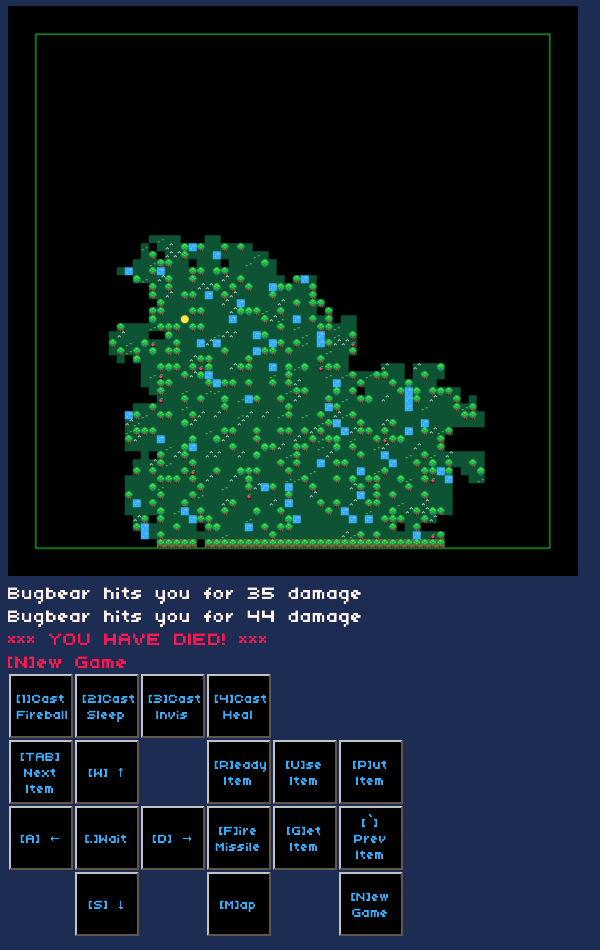 DON’T PANIC. Well, panic a little. Got door opening (but not closing, needs a whole new command), Portals (AT LAST), and 6 level generators + tutorial level. They’re very simplistic levels, and it’s possible to be trapped in some, but usually works?

Tomorrow I should really get missiles flying, trapped levels, maybe an overview map are optional. Strength/“experience” gain is a little harsh right now, but balance is low on my priorities.

Found an absolutely horrible off-by-1 math bug in a library I’ve been using for years. Programming: It’s always harder than you think. 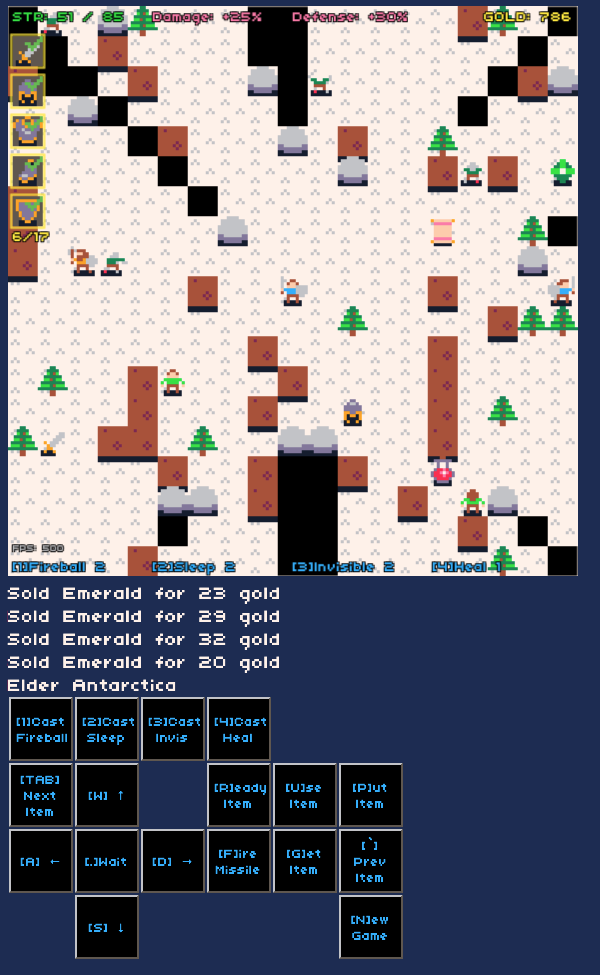 Running low on time, so much stuff left to do and I just did some detail work today, didn’t even get missiles in (and Fireballs, which are a slow case of missiles that explode). Levels, absolutely first thing tomorrow. 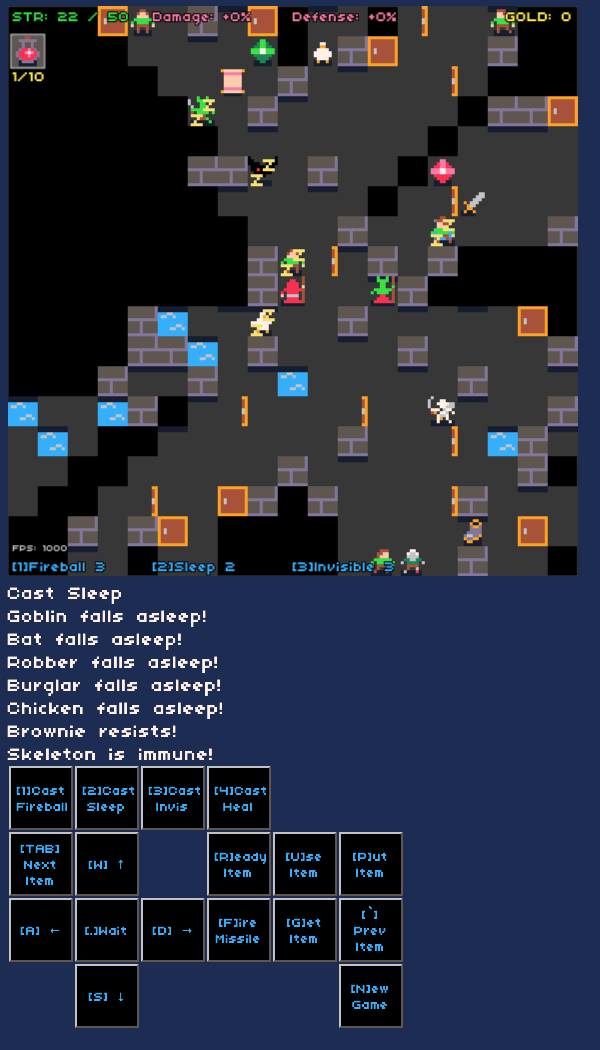 Very little free time today, but I got a monster list completed, with a lot of tricky multi-level monsters, and I can spray them all over the junk level. Got some design notes for spells and missiles, and how I’ll split up the levels tomorrow. Then try some kind of AI once I have a place to navigate. 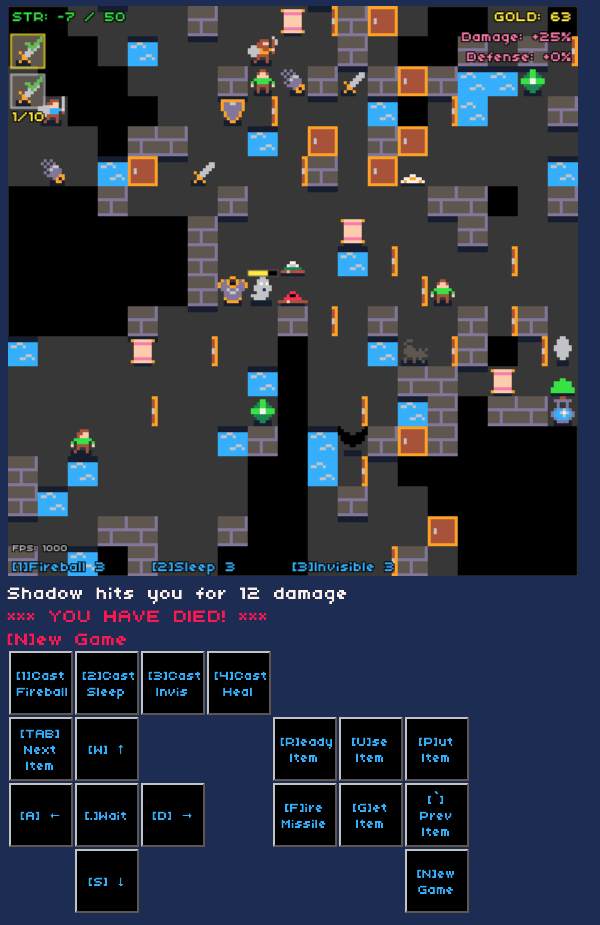 Monsters (well, just Goblins today) are placed and can be fought. They don’t move yet. 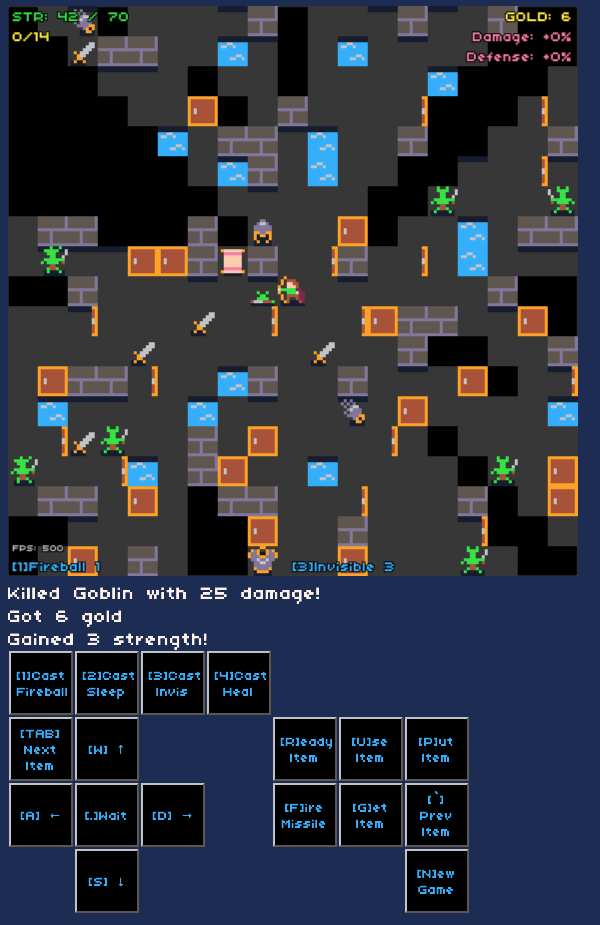 Didn’t get a lot of uninterrupted time today, but made useful progress finally:

Items now exist, can now be got (auto when you move; I might add a Get command), put down, readied/removed, and used. 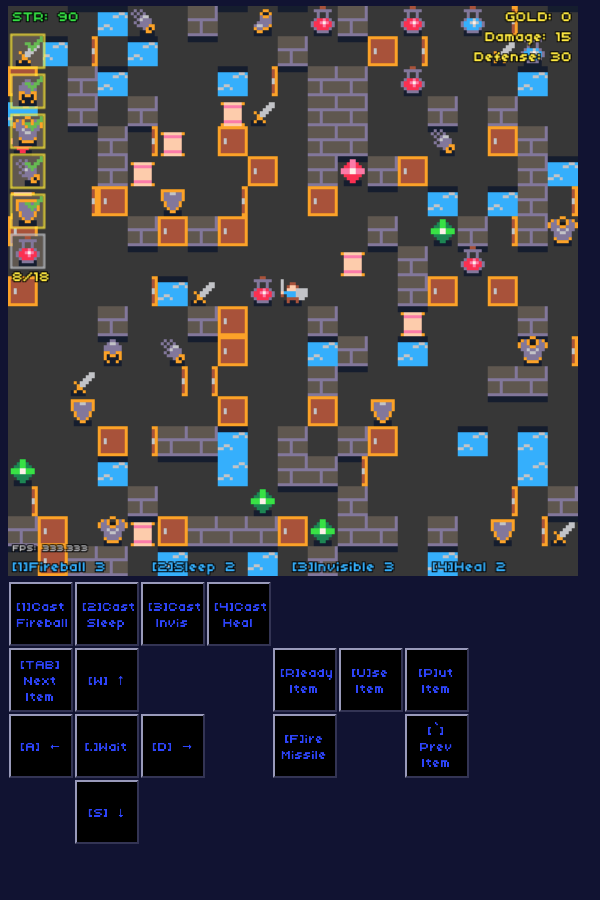 Currently a pretty limited item variety and reusing many sprites for better gear. I don’t need a giant variety, but I dislike different items having similar sprites. That’s a Day 6-7 problem, I guess.

Note the player here is a fighter, but has picked up a bunch of spells above the base Heal 1. Anyone can memorize extra spells, but they won’t add to the “base”, which are the only ones which recover on resting or drinking mana potions. Books to increase spell base are very very rare. 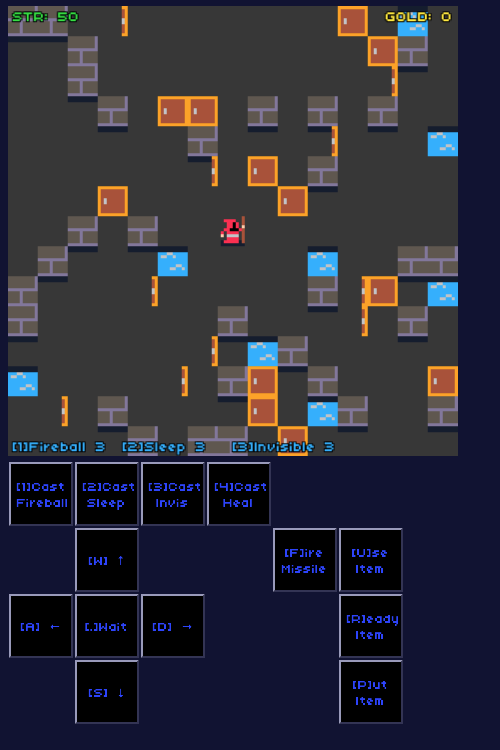 Minor annoyance, discovered Oryx’s “wee fantasy” figures, which are otherwise quite excellent, are left-handed. Flipping the images gets them all fixed except right-facing still has a shield in left hand. I don’t mind a few sinister figures, but that’s too much to ask of heroes not named “Link”. 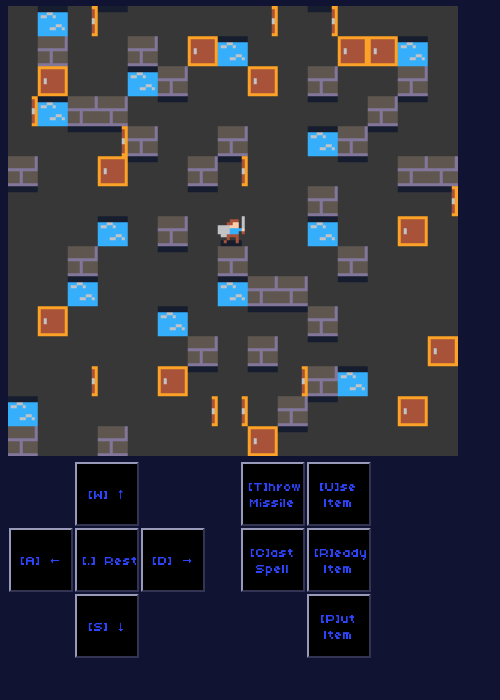 Getting started now. Will be working until next Saturday!

Game feel is nice, boss fight is tolerable, the ending is… not OK.

Crashed in a fight:

They're installed in Library/Frameworks, should be the same?

Played on telnet, worked perfectly fine, just like the BASIC version did 40 years ago.

You guessed 2 atom(s) correctly.
The actual state of the board was:

You scored 12 point(s).
Thanks for playing!

Mac version, even with SDL2 ttf installed, fails with

Apparently the Linux binary is chicken-csi, so either symlink it, or change it in the first line of eldritch.scm (make sure the -s is still there!)

If you're having troubles running it, make sure you can reach your Chicken 5 install:

If not, figure out where it installed and add that to PATH, or just:

Worked great until I typed something other than a legal move, and then it got stuck not accepting any input. Maybe use some ANSI to clear the screen between moves, and filter the input.

What happened here, why was Mystic Dungeon removed? It's actual '80s game tech.

I wrote this for Procjam 2014, and I'm getting back into it for a Halloween horror update.

Dormanica is a classical dungeon crawler, 90° turns in a blocky maze full of weird monsters of various elements and powers. You can brute-force fight your way through, or use magic from a limited supply of scrolls, or sneak and evade everything except the level boss. First few levels should be pretty easy, but scales up quickly.

It's now much easier to play on desktop with keyboard. Fixed spells with the same or missing textures. Fixed commands which could play out of order. Took out the turn timeout, that was just mean.

Known issues: Only tested on Safari, may have browser compatibility, sending me any errors from console would be helpful! Keyboard response seems OK, but I know that can vary; I'd like to hear about any issues. WebGL slows down after some time, which isn't too big a problem since a game doesn't last that long unless you're very lucky, but I'm working on it.