Entry in the Lisp Game Jam 2019, written for the MakerLisp Machine.
Submitted by sjl (@stevelosh) — 1 day, 7 hours before the deadline
Add to collection 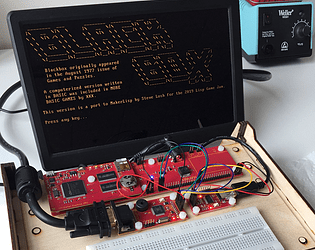 Well done! I like to see this kind of "naked" machine setup, even though I have no idea of what's going on there =P. I also like the easy telnet interface.

I can really appreciate the engineering at multiple levels here. You've got custom hardware running a custom Lisp and a game that you've made very available over common telnet. The game itself is enjoyable but I'm most impressed by the engineering.

To be clear: I didn't make the hardware or the Lisp implementation -- those are from http://makerlisp.com (which is not me).  I just made the game and plugged it into telnet.

The hardware does actually support acting as a serial terminal over USB, so I considered trying to plumb something up that would connect the telnet connection to the actual hardware's terminal so you could be playing across the internet on the actual hardware, but that was just too fiddly to do in the time I had, and it would have meant only one person could play at a time (and meant I can't use the machine myself!).

Like all the commands and the "note-taking" mode. Also very happy that I can still play it over telnet even though I don't have the racy red hardware pictured!

Played on telnet, worked perfectly fine, just like the BASIC version did 40 years ago.

You guessed 2 atom(s) correctly.
The actual state of the board was:

You scored 12 point(s).
Thanks for playing!