Even if it's free, given the subject I'd like to submit my Little Antifa Novel: https://maurovanetti.itch.io/lan

Hi Gabriel, thank you so much for your appreciation.

I'm planning to test it a bit more with my students, wait for some feedback (and perhaps pull requests!) from the dev community, cram in a few more useful features, and in July or August I guess I will have a stable version to detach from this template project and publish for free on the Asset Store.

Please let me know if you want to use it, I'd love to see how my child can fare in a wild environment, it's been more of a lab rat so far but I'm confident it has potential. In that case, I'd be eager to help in integrating it in an actual game.

Of course I don't mind! That's great. We could make a version 1.5 integrating your translation as well if you are OK with that. I will need a few extra details such as your name for the credits. If you don't mind, we can do that together at the end of December, I'm pretty busy right now and I want to give you the time you deserve for your very kind effort.

This is wonderfully written + it displays in a few minutes how much capitalism sucks.

This game has become part of a political controversy in Pavia in October 2018. This article in Italian on Vice Motherboard gives a detailed explanation of the developing story: https://motherboard.vice.com/it/article/a3paka/festival-videogiochi-pavia-videog...

Great! Thank you so much.
We'll be contacting you soon.

Hi! I'm part of an all-Italian team and we'd really like to make our game available in English too.
We can write the .ink files in a fairly decorous English with no obvious typos, but as you can tell from this message it might still sound a bit awkward.
I guess several teams with no native speaker are going to have the same problem, so I'm asking whether some nice mother tongue is willing to volunteer for a last-minute proofreading of the .ink files to fix all the awkwardness. We could use this thread to help demand and supply meet.

Love and gratefulness by the unfluent.

Great playable leaflet about Net Neutrality. You won't be getting what's wrong with breaking NN quicker than this.

The crimes I was accused of were of a non-violent nature: peacefully resisting the (illegal and violent) actions of the police officers, insulting (i.e. criticising) «political, administrative or judiciary bodies», organising an unauthorised demonstration. Most of the accusations have already fallen since the game was published, but a few are still pending, namely the insults against the impersonal «bodies» and the unauthorised demonstration.

I disagree that all kinds of expression should be protected, for instance I would not allow any individual to bully weaker people with words and gestures. If a man sees a woman passing by and calls her a slut I would not consider that freedom of expression that ought to be defended. The same applies with using ethnic slurs against Jews, black people, gays etc.

You have a very prejudiced view of what antifa people do.
A few weeks ago, a Fascist group set up a gazebo in my hometown (Pavia, Italy, depicted in the game) and started to spread racist leaflets. We called for the racist gazebo to be forbidden, but when the authorities authorised it anyway, we prepared a counter-leaflet replying to all their lies. We surrounded the gazebo with ordinary women and men handing out our anti-racist leaflet and it was a huge success for us and an embarrassment for them.
We outsmarted them as you suggest.
Unfortunately, the Hillary Clinton types who run the city government are the ones who authorised the gazebo and did nothing to counter it.

I asked you to point out the historical (?) errors. You didn't answer and you admitted that you didn't even play the game to the end (it's very short). You gave no link and no proof of your conspiracy theory that we killed innocent people (?!) and hit random passer-by's with sticks (?!?). You left dozens of nonsense comments with very long political rants after I demanded that you please stop using the game page as a dump for your political obsessions. And I demand the same here.

You are not supposed to review a game without playing it and if you don't know these things you simply didn't play it. Now stop it, please.

Play the game and find it out instead of asking silly questions.

Is this fake Voltaire quote a thing also where you live? We are always getting that rubbish here in Italy...

BTW, I didn't know this game, let's link it: https://dasius.itch.io/my-little-blacksmith-shop 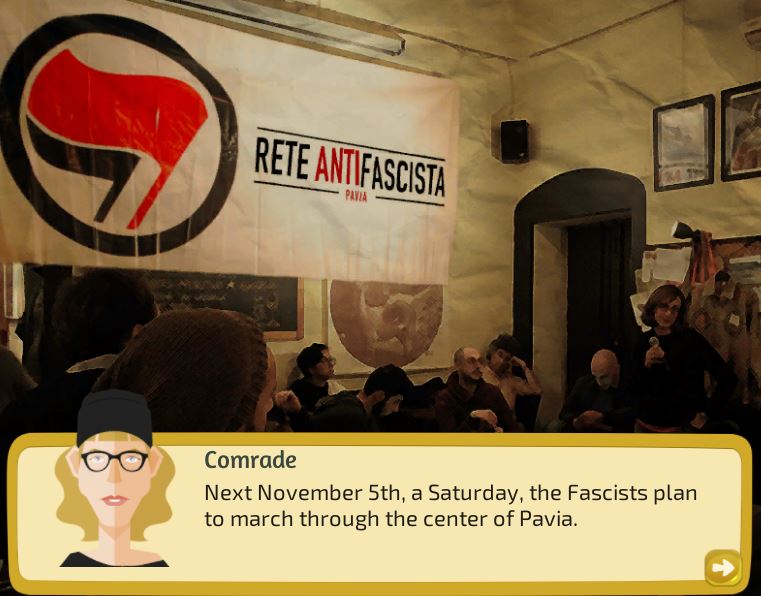 Mauro Vanetti (it's me), the author of the controversial indie game Two Interviewees about the gender gap, has released a new "playable leaflet". This time we're talking about the Antifa movement in Italy, and more precisely in my hometown Pavia.

This game was made in Unity + Fungus (Two Interviewees used Ren'py) and it's playable in the browser or - with a better quality - on any desktop OS (Windows, Linux, Mac).

It's an experiment in interactive journalism and at the same time an attempt at using new media for political discourse and militant self-funding. The players can live through what happened in 2016 in Pavia when we tried to prevent a 300-strong Fascist (in the US you would call it white supremacist or alt-right) march from walking through the city centre. You can take completely different choices from the ones we took and see what would have happened.

The money donated to the game will go to support the legal expenses of the Antifascist Network of Pavia; in the game you find out why we need one. 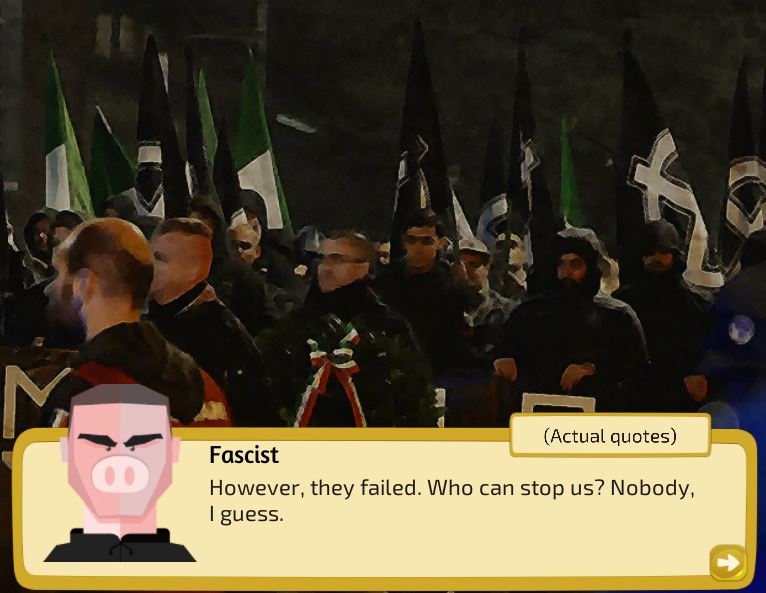 PS: We played the game live on its launch day in a left-wing pub in Pavia. It's the same pub that you find in the game itself (see the screenshot above). It was quite exciting. The event was introduced by the indie duo We Are Müesli who spoke about narrative games and their usage as an alternative medium to explore history. Afterwards, we assigned each game character to a patron who had to act his or her role, plus the pub's host who read the voice-over. The game choices were voted by everyone in the room by raising hands, and sometimes this aroused  heated debates. It was fun and a nice example of what interactive theatre can achieve, I hope games conceived for this purpose will start to pop up! 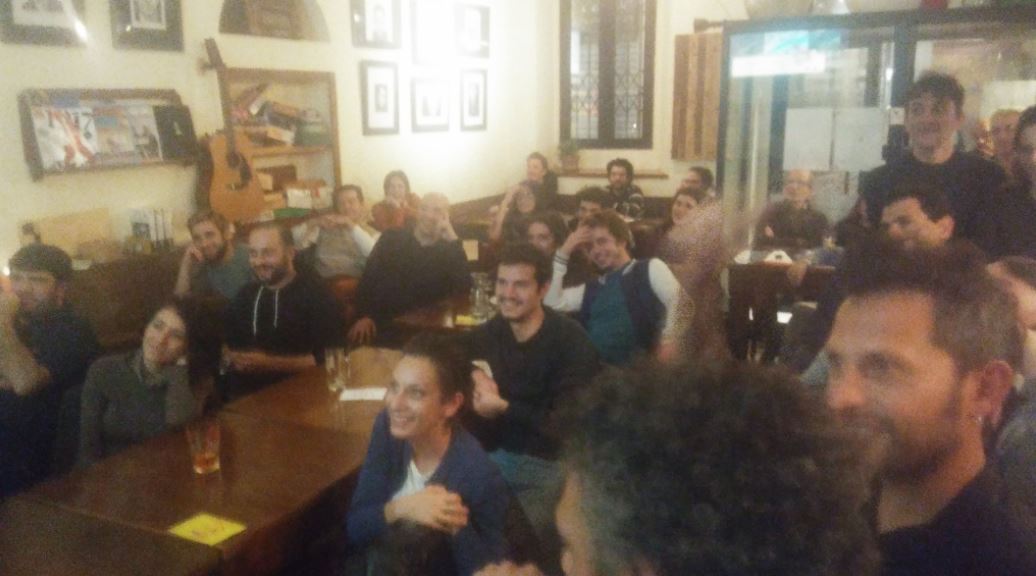 I asked which things were historically incorrect as you claimed. Have you got an answer please? I can fix any factual mistake you can point out. Thank you.

Which things were "historically incorrect"? I was there.

Ha ha pippinbarr, you are right. It's a bit overcomplicated, or overmystic if you like. :-)

The sentences below should give you some hint about the way the characters move around.

However, yes, it's very hard. I and Simona managed to complete it but, hey, we made it. :-)

Some have argued that private questions are illegal in an interview in many countries. Yes, in some countries they are, and yet they keep on being asked because the bargaining power is unbalanced.
http://www.bbc.com/news/busine...

«Deal with it» is not a fact: it's a suggestion to let physical differences trickle down on economic and social inequality.

The sources omit no data.

The "narrative" of gender bias can be "narrated" to you by any conscious woman of this planet.

Gender quotas don't exist in most countries of the world. In any case, I'm not in favour of the false solution of gender quotas FWIW.

Of course it is, in a sense, political propaganda.

Please, please, please don't "suggest" it. I don't want to have people like you supporting this game.

Hello asgaroth!
Do you believe that the game is biased, that I am biased or that the reality of the labour market is biased?

Perhaps the answer I gave to the question whether it's possible or not to have the woman hired was vague on purpose because that is a crucial point of the game. Or, who knows, I am just very evil... :-) What's your guess?

I have provided several stats to show that unfortunately it is not.

It's basically a short game built around a "message".

I don't want to be too Italo-centric here, but many short works by Molleindustria qualify as playable leaflets IMHO. I made up this concept while talking about my Two Interviewees during a presentation for the Game Design Week in Milan (in Italian: http://www.maurovanetti.info/?q=ludovolantinare).

I don't know if the category has some academic depth, but this game would definitely fit in it. :-)

Another example of the playable leaflet concept. Well done and important message.

I'm afraid you are over-optimistic about the marketing industry you picked as an example of a woman-friendly sector as far as hiring and wages are concerned. In some countries it might be the case, but there are injustices there as well, as this article indicates: http://prosar.com/2015/09/17/its-time-to-close-the...

The 80% rule sounds like a very weak barrier. 80-20 is still very unbalanced, and it does not necessarily solve the pay gap. I feel that there's a deeper, systemic issue at stake here.

I'm hugely flattered by finding this game listed on the 2016 highlights by Molleindustria (aka Paolo Pedercini) that puts «emphasis on politically-aware/ underrated/experimental works». Try the other games in the list, they're amazing and show how much room there is in this medium for reflection, satire, feelings, history and politics ("in a good sense"): http://www.molleindustria.org/blog/molleindustrias...

What's your feeling about it?

This was such a nice reply.

Reply
itch.io Community » itch.io » itch.io tips · Replied to leafo in How to leave a video comment or reply
Mauro Vanetti3 years ago

Reply
itch.io Community » itch.io » itch.io tips · Replied to Mauro Vanetti in How to leave a video comment or reply
Mauro Vanetti3 years ago

Oops, I did manage. You just have to paste the URL (not the link) on a new line and then press Enter, which is what triggers the magic. The magic happens in the text editor box itself.
Very nice.

Reply
itch.io Community » itch.io » itch.io tips · Posted in How to leave a video comment or reply
Mauro Vanetti3 years ago

Great feature. Can I edit other people's comments in order to turn their YouTube URLs into embedded videos? I didn't manage to make it work.

Translation: «Oh LOL, men and women are not equal by nature, deal with it. :^) »