...I'm now finally seeing the Tavern of Spear inspiration: You both decided that games should have massive continuity errors. Uninstalling.

So I just installed the update, but it still says 0.20c. I'm not sure if it's supposed to be a new version?

The font is somewhat difficult for me to read. Would it be possible to add a font selection?

I suggest asking manonamora. She seems to be rather proficient with Twine and doesn't mind answering questions. CRWL has saves that function in the app.

I'm completely aware that that is how it works by default, but you definitely *can* change that default. Plenty of Twine authors have done so. I just don't know how to do it myself.

If you felt that 1. conflicts with anything I said or was helpful in any way, I have no desire to speak to you ever again. Also, that map is completely and utterly useless because there is no in-game map telling you where you are.

Ok... I'm very quickly losing interest. I thought this was a sandbox RPG, not a maze puzzle game with no obvious endpoint; zero clarity as to where I am, have been, or am going; stairs whose direction doesn't match the visuals; and incredibly vague hints. And from what I've read, it appears at the end of all that I have to defeat someone in physical combat, even though I've had a sub sex build going the entire time up until now.

Even though I'm definitely a sub... I would probably still play that.

I'm not having trouble loading saves. It doesn't save, so there is nothing to load. And it's not internet, it's the fact that it's the offline version of the game.This is the error I get: 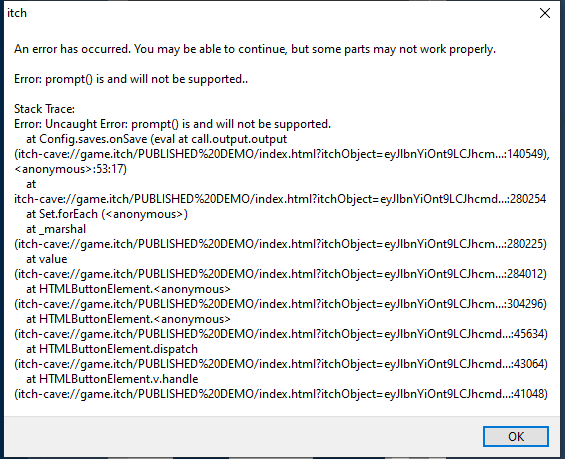 Oh, since I was using the app, I actually didn't even realize there was also a web version. If I realized that I would have clarified that it's on the app version that saves don't work. I checked the web version and they do work there.

Saves are not working. I know there is something you have to change for Twine saves to work offline, but I'm not sure what it is.

Oh, ok. I'm just not the target audience, then.

(TBH I have no idea who would be, but there seem to be people who like it, so I guess there is an audience for that type of game?)

So, I've noticed that because an entirely new file is created every time you update, it's impossible to keep saves between versions (even though the save function works fine). I don't know if this is something you know how to fix?

Well, turns out it doesn't anymore. The game's description page is apparently now drastically different from what it was back when I first downloaded the game. I mean, this comment thread is a year old and you kinda necroed it when I, for obvious reasons, was not following the game's progress at all. So I didn't realize the description changed.

Woah, an update? I wasn't expecting more updates, I thought it was complete already.

Was this new content or content that was already on the premium version, and just added to the free version?

No, it isn't. Which you'd know if you were fucking capable of reading.

In fact, I would love it if the author stated that the MC is bisexual. That would be, you, know, exactly what I've been asking for the entire time. Which, you know, you'd know if you were fucking capable of reading.

I know you're currently busy finishing up the next chapter, but is there a possibility you can add an option to install via the itch client? Perhaps once the update is ready.

(I'm only posting this here because for some reason comments are disabled on the free version and your other game.)

For both of your games I have immensely struggled with figuring out exactly what the buttons do. I see absolutely no connection between clicking a button and the result of doing so, and the result seems to differ depending when I click it. I don't understand at all, and the goal of the game is entirely unclear. I figured the lack of explication is something that would improve with more development experience, but it has only gotten significantly worse with Carnal Voyages, so presumably the problem is on my end and not yours. Is there some sort of explanation somewhere? The only thing I can think of is that I've completely misinterpreted the genre, and that these are actually supposed to be puzzle games, where I'm meant to figure out how to play as I go on.

Have you decided yet which jobline you're working on next?

Ok, so on my first playthrough I just didn't go to the greenhouses because it said they were off limits, even though there wasn't physically anything stopping me. This time I was very curious what I was missing, so I saved first (in case I decided I didn't care) then tried going there... that's essentially where the entirety of the game is (which in the game's current state, appears to be entirely female guards, or maybe I just never found any male ones). In a place where you're not supposed to be. So the intent is that the MC does something they're not supposed to do??? Though that does explain why the MC's dialogue suggests so much resistance. Maybe I'm not the intended audience for this game...

There seems to be the implication that the Attack on pirates quest is something I'm supposed to win? And involves actual combat? What happens if I lose?

Started playing, and very early on found a piece of dialogue that said the MC has a girl waiting for him, and the MC is described with male terms. So the MC is not gay? Why is it tagged as "Gay" then? I'm confused. Is the MC straight, or bisexual and monogamous?

The bigotry is literally right at the very fucking start of the game. Anyone who even attempts to play it can very clearly see that you are lying.

The fact that the game has kinks does not in any way, shape, or form imply that I ever kink-shamed anyone. I never once mentioned any kinks. That was all you.

You can't just decide that a slur isn't a slur. I don't think you even know what the word means. You seem to think it's a kink for some reason. It's a derogatory term for a transgender woman. That is not a kink. It's exactly the same thing as using the n-word to refer to a black person. Just use the transgender tag, it means the same thing and isn't offensive to anyone.

It's entirely possible that there isn't any further bigotry after the initial scene -- I wouldn't know, because, as an actual fucking LGBT person unlike you, I do not want to play as a bigot -- but if that's the case, there is a very simple solution to this problem: Change the opening scene. Done. Easy. I still wouldn't play it, since I don't want to play as a straight man, but you at least remove the offensive content from the game.

What the actual fuck are you smoking? Kink shaming? The only thing I have expressed opposition to is bigotry. Bigotry isn't a fucking kink. You have, since the very start, been advocating bigotry, and I have, from the start, been saying bigotry is wrong. You are the antithesis of inclusivity.

I absolutely don't think I'm speaking for you, and I also think that if you were LGBT yourself you wouldn't believe that anti-LGBT sentiment is good, as you so clearly do believe.

Also, I would be very surprised if I am not approximately fucking twice your age, since you sound like you're around 16 years old.

The only immature thing I've done here is continue to feed the troll, you, for as long as I have. But it seems you're getting bored of trolling now, since I've already called you on it.

What do you mean? The game *is* text. This is an entirely text-based game.

Ohh, I see what happened. I didn't notice that the version numbers changed from 1.x.x to 0.x.x. So I was actually playing 1.0.2, which is older than 0.0.2. I am used to the last version listed being the newest, but it's actually numerical and not chronological.

I'll go ahead and uninstall then re-install, so I don't get confused by the multiple versions I have installed :P

I noticed the new cover art. It looks cleaner overall, but the MC's head looks strangely small compared to the rest of the body, and Ole's redesign appears to be only in the cover art and not in game? Or is it in the Patreon version?

I'm suffering from an excess -- an excess of people like you. Get the fuck off this planet, asshole. The world does not need any bigots like you, especially those pretending to be LGBT in an attempt to make actual LGBT people look bad.

There is a one hundred percent chance that you either 1) are a cisgender straight white conservative man or 2) completely failed to grasp even the most basic of concepts in my original post.

You literally just described yourself. You also just admitted to being a bigot. Did you even read what you wrote before posting it?

Alternatively, you have absolutely no fucking clue what I said and are just disagreeing with me for the fuck of it. In other words, you are a pure troll. Which is it?

LGBT people do. not. ever. want to play as bigots for even a millisecond. I don't give a fuck if the character changes and matures. Which, contrary to what you seem to think, I already knew they would. That does not mean any LGBT person anywhere in the fucking world would have any desire to play a character like that.

Hm, based on the gender-neutral terms in the description, I was assuming we could pick the MC's gender. But it seems like it's gender-locked to female?

Reply
Swallow The Moon community · Created a new topic Shouldn't this be categorized as a game?
MarloweC66 days ago

Just wanna mention that this doesn't show up in a list of games because it's categorized as a "thing" rather than a game. I only found this at all because of tumblr.

I'm a bit confused whether there's actually an option to be gay or not? You can select it, but then immediately after you go "oh well maybe I was just joking about that." But... uh... I wasn't joking...

Actually, Hotfix 2 fixed it. It was related to me being bald.

I also have this issue, even after the fix. Do certain colors just not function with certain character options?

Well, they both are adult sandbox games with a story (or in the case of ToS, it tries to be but frankly utterly fails in this regard). But there are other games that are more similar to this one in the same genre.

Oh wow, it's been so long. I'd need to replay from the beginning to even remember what's happening, lol. Maybe I'll just wait until July 16th though.