Most of the vehicles drift to some extent (e.g. boats drift more than cars). Do you mean like a separate drift button like Mario Kart's slide?

Thanks! I made the music using beepbox.co, and the sound effects using http://github.grumdrig.com/jsfxr/.

This is a really funny concept! Finding the cutoff on GPT-2 vs its prompt is also an interesting mechanic. It might be usable for a full game, with more wiggle room or hints on how far off your guess is. Also it would've been nice if the text, especially the part of the text used for gameplay, was more proofread.

Forgiving. It says on the top of the score page. I found the harder difficulties interesting to get through but not as fun for score runs.

Lovely game! I hope the full version turns out just as charming. Also thought I should share this score: 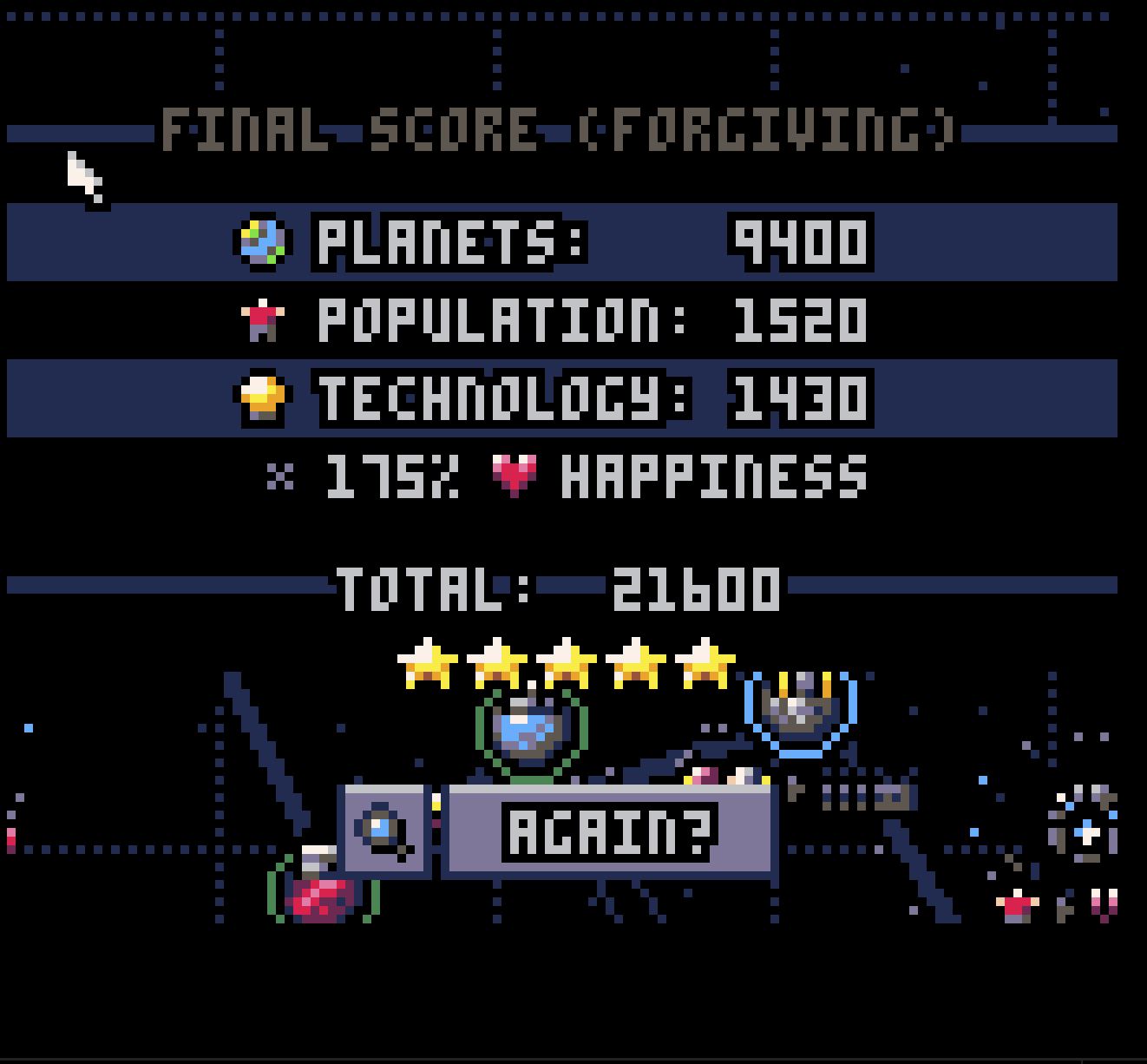 Get two points by projecting each of a wall line's end points outwards an arbitrary large distance (anything bigger than the screen) from the player's position. Get another two points by projecting a small distance (however much of the wall you want to actually see). Draw a polygon with the four points you found. Repeat for every wall. Use a solid fill color (not transparent or something) so they all look like one cohesive mass of shadow.

Are you the same red_kangaroo who was the huge fan of Hero Trap? Welcome back!

Yeah, with such different focuses, I don't think we're going to be stealing each other's audiences so much as we're kickstarting a genre.

I think a spinning barbarian is pretty obvious, go for it.

Do you have any plans to add terrain or dungeon generation to yours?

Congrats! I'm glad you found a prototype worth developing.

I'm not sure whether Pinball Dungeon will get all the way to release, but I am still developing it and that's my current intent.  We should coordinate a bit to make sure we don't step on each other's toes. My focus for this game is on memorable experiences (and chaos) as opposed to tactical depth. I plan to do more to capitalize on the fact that it's not quite actually turn-based, play more with unique physics objects, and do more with dungeon generation and the exploration side. I'll probably be going for a cute to cute-dark art style. Target player demographic probably skewing younger.

Do you know what parts of your design you're focusing on? 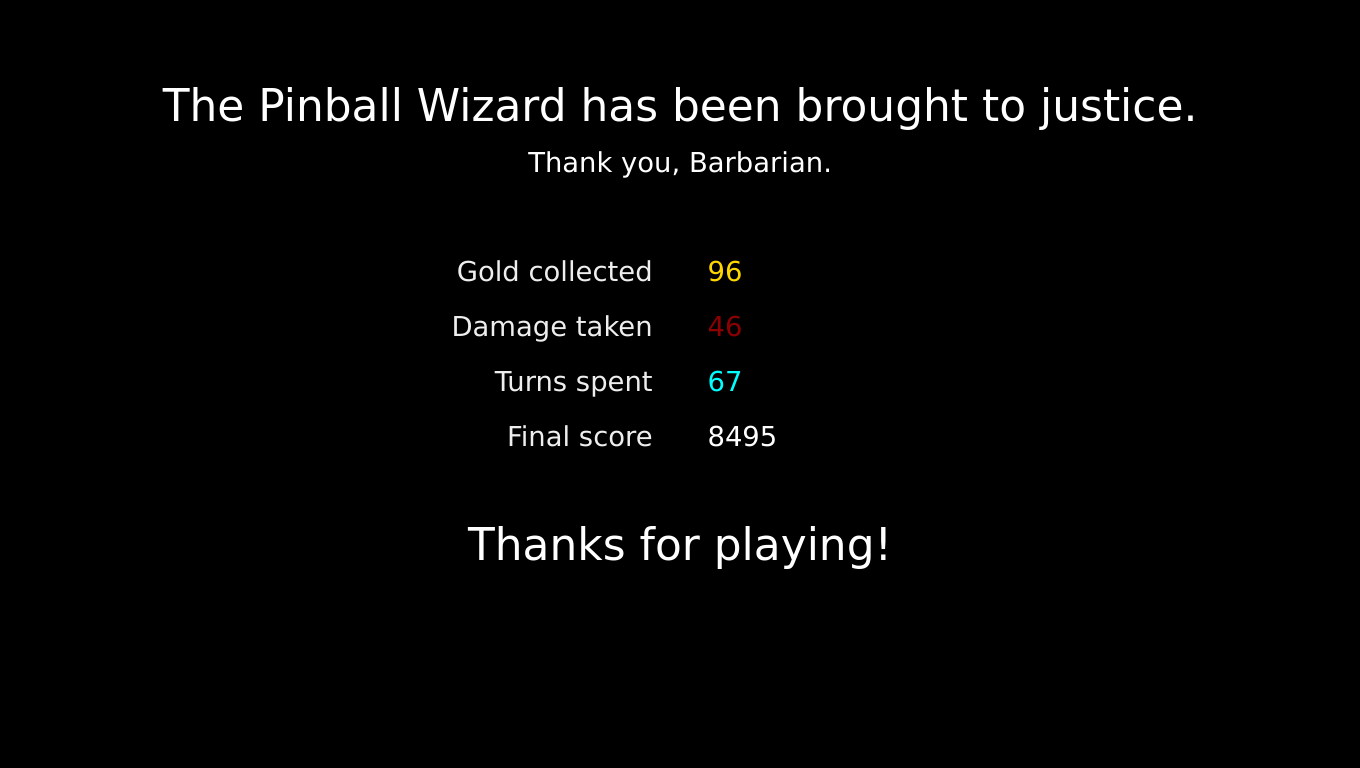 I'm glad you enjoyed Hero Trap too. You're right that it's not on Itch. I was thinking of cross-posting it here in a couple months, once 7DRL hype has worn down.

Drawing shadows that way is actually really easy. You take a wall line and project it away from the player by a small amount (half a tile here), then project it very far away (like 100 tiles or something silly, way off screen). Take the four points you get from that and draw that trapezoid shape. Repeat for every wall.

I can't do anything, the 7DRL submission deadline is closed :-).

The score is 10000 * gold / (turns spent + damage taken). Because time is in there, fancy moves that accomplish a lot are rewarded, a little. Rewarding fancy shots more on top of that would be cool, but I think more immediate recognition would be better, maybe some sort of piety system where this sort of showboating pleases the gods.

Thanks! My previous roguelike was tough as nails, but this prevented a lot of people from seeing most of the content, so I deliberately made this one fairly easy. Give that a try if you want more of a challenge.

And yeah... it's really like shuffleboard more than anything. But the antagonist is definitely pinball based, so it gets its name there.

The rogue traded their abilities away for two more inventory slots.

Snuck in a final update with a rather large amount of stuff.

The boss is more dangerous and has a new special attack.

I added some more flair to the ends of floors and the leadup to the boss.

I added an entirely new enemy type ('a').

I fixed the stealth bug. It was embarrassingly stupid in retrospect and I should've looked at it earlier.

I renamed the wizard class to "Regular Wizard." I don't know why I didn't do that in the first place.

I've added a few wands and a final score screen.

I might try to cram a bit more content in before the deadline, but I think this is roughly where I'll leave it to submit.

And some new enemy types, environmental hazards, and foreshadowing.

Split the dungeon up into floors.

Added a bunch of monsters with interesting physics.

The generator now handles connectivity much better and should be much cleaner in general. Additionally it's capable of placing monsters specific spaces in a way that forms a rudimentary narrative.

I think I'm just about ready to start filling it up with content.

The dungeon generator has been upgraded.

Dungeons are still way too big. I'll fix this after adding floors, which may be tomorrow.

Working with these dungeons has turned out to be a total bear, so I'm glad someone is enjoying them.

Tried a bunch of things that didn't work, but eventually upgraded the dungeon generator. Currently it's just a little more interesting, but I think I see how to turn this version into  something with enough knobs for a whole game.

I enjoy this concept, and it looks good already!

Kind of a weird question, but is that the solarized palette?

I thought the day was over but I added some more stuff. I have the UI up. Buttons for two abilities work already, and let you use bombs or a bow instead of hitting things with your face.

Didn't get nearly as much done today as I wanted, but I did manage to clean up a lot.

It now looks better (found my dual contouring error + added some #s and .s), runs faster (various optimizations + made tiles bigger), and has a cleaner dungeon (need glitches to escape, should be connected).

Physics tweaks, more refinement of turn order, a few kinds of monsters. I always update the link when posting these, in case that wasn't obvious.

One of the tweaks I did was to increase the amount of static friction, which shaves off a little time at the end of every disk movement, which adds up super fast and makes the turns much more satisfying. That's one of the benefits of rolling your own physics. On the downside, I'm currently only giving turns to monsters that are within the sight radius of the player, because waiting for invisible monsters to move around isn't fun. I'd prefer for monsters to be actually doing something with their free time, but barring something super clever they're probably going to have to be this way.

I'm using dual-contoured simplex noise for the dungeon right now, and something is off with my dual-contouring that makes some random jaggies. I need to fix that if I keep using this approach. I definitely need to decide on something with more features to show off how walls affect gameplay, but I don't think I'm going to show off as much as I did in Hero Trap. Maybe just a hybrid of caves + subdivisions? Or something something voronoi diagrams.

Tomorrow I'm planning to do something with abilities and/or items. There will be UI constraints on this so whatever I choose will have to be pretty tightly limited, and trying to do both sounds rough. Items feel more important for a roguelike, but come with the constraint of having to be able to drop things, which requires extra UI. Hopefully I can use tomorrow to get to the point where the rest is just content.

Updated: things can die, turn order makes more sense, you can tell whether it's your turn

Yeah seriously. I was inspired by a different disk-flicking game I made last year (http://noisyowl.com/disks/), which in turn was inspired by the board game Catacombs and the shape of the board in Hearthstone (it's an interesting shape; bouncing things off it is more interesting than waiting for your opponent).

You said yours was inspired by Into The Breach... how'd you get there from that? Is your plan to continue doing something like a tactics game, but with bouncy disks?

Wow, we both came up with the same idea. I'm curious to see how different our games end up from this concept.

Already it's interesting that you're aiming in the direction of the cursor and mine's opposite. Your way around lets you use the cursor to aim and mine forces you to eyeball it.

It literally didn't occur to me that you should be able to bump enemies down pits. That seems like a huge oversight on my part. (Then again getting dunked into lava as the player seems rough?)

Drag your @ to move.

It's buggy and there's no actual gameplay (can't even kill the monsters), but it's definitely already something weird.

Edit: The link above goes to the latest version, not the one described in this post.

Pure white on pure black is somewhat harder to read than using off-white and off-black, but the problem I'm having is that a pixel font is a very visually noisy thing that's not designed for long reads. Graphic designers make a distinction between "display fonts" which are good for titles and "text fonts" which are good for the body of text. I'd say a pixel font is absolutely a display font.

I was expecting it to wrap but this is so much cooler.

I agree, I think workers specifically need to work differently. I think I'd resolve it with a button that toggles between controlling only workers and only the rest, with both reverting to simple AI otherwise (mine last thing you touched for workers, fight anything near you for fighters). Having to manually mine resources this way works as a joke, but one that I think is achieved by telling the player how to operate the toggle button after one level of sillyness.