A gameplay in spanish here ->

Only need your paypal email.

if I have the two files. Maybe it's a problem with Elementary OS, or I don't know.

I also tried to open it from itch.io launcher and it gave me the same error.

It just has to be playable :D

Hello, thank you very much for your comment :D

In this project I wanted to introduce a lot of different mechanics, but they couldn't be implemented, because of the time. I plan to put the gold in the future and even add another type of coin.

The game is very inspired by the game "Caves" that is for android, but it has and will have several differences.

What is the meaning of pickaxe?
It's being able to enter parts that you can't enter. And I also wanted to implement minerals, but I haven't been able to do that.

Also to say that everything is very expensive, because the game lacks to be balanced. xD

Also the game of the moment does not have end, it is only to advance and to advance. In the version of github I have implemented (a little) the theme of achievements.

At this time I should not update the entry to include features as it would be like cheating, then I will update it after the jam finishes.

I will also continue working on the game, I will release a version for pc and also for android :)

If I think in chrome happens that and in firefox does not happen but there are problems with the sound ... I think it's better to download it... Thanks for playing it :)

I will try to see your game, although my connection is too slow. but I will try :D

Yes of course, later I want to put more forms of combat such as bows and magic and more things. Thank you very much for your comment :)

Thank you very much for your comment. The game is infinite xD (for the moment). I'm going to continue the development of the game, but I shouldn't modify the entry before the jam is over. Thanks.

Hi, I'll try to watch the game at night as there improves my Internet connection. Greetings

There's a bug... When you exit, the data is not saved correctly. I will upload the hotfix at night and probably the html5 version.

I can't replicate it again :(

I think I stopped selecting a card and hit play. I don't remember well... 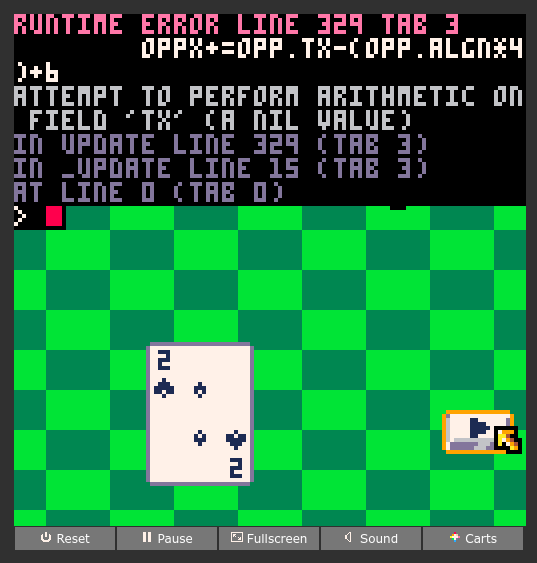 Hi, you can find the assets links here --> https://github.com/DeybisMelendez/don-pepe