look awesome! what did you do for the wheel wells considering the front pieces don't have those cavities?

Love the software. Cloning is very useful. In the game trailmakers, the editor does something awesome when you clone a piece. It will auto-place the clone in the next available spot past the object, towards the camera. This has the affect where if, for example, you were building a long bus or a wall, you simply repeat the clone command (Control + D) and it will continue building in the same direction. I can say from experience that it's really nice to build things with this behavior. Is it possible to add some sort of auto-placing feature to cloning, rather than defaulting to the original object position? Thanks

Thanks! I enjoy improving the concept and the bugs in version 3's rewrite bothered me.
Well, I made a discord server and telegram channel for general updates and stuff. Discord seems more popular than itch for general discussion and updates, especially text-only ones. Guess I could do more devlogs of stuff here too, though.
Here's a non-simulation teaser:

Hey rogerty, I switched from Love2d to Urho3d. Still scripted in Lua. Urho is much faster and includes a very nice built-in UI. Plus it allows for 3d projects (currently working on some cool stuff)

Try this link and click Beta_2 (you don't need to donate to download): https://evolgames.itch.io/evol-ether/download/eyJleHBpcmVzIjoxNjA2NjkzODI4LCJpZC...
If you have further issues, join the discord, telegram, or email me at evolsim@gmail.com. I can just send you the file directly.

List your settings here for others to try out. Be sure to indicate all relevant values. Also provide a name/description of your preset.
I'll add the best ones as the default presets in a future version.

General discussion of the game here.

Cool! Reminds me of Fzero in a good way

Next time I update this I will add that as a feature to toggle between.

Actually, totally forgot you can speed up time. Untick "Limit FPS to 60" and it'll run faster. The Round Time is not coupled with framerate, so that will stay the same (but you can shorten that as needed). Should evolve faster.

Thanks a lot for coming to check out my game and for the feedback. Haha, I'm glad you think so! I can't help but laugh at it most of the time. It's just so goofy the way the guy moves around.

Speeding up time is a good idea! I'll see if I can make that work.

Yes, it's currently being worked into the next version so that the user can switch between creatures and humanoids

The edge, do you mean the edge of the map? If I do total distance then they would probably be more likely to roll around in circles then to go in any linear direction. I chose displacement because I figured it would force evolutions to consider traversing over movement. I have yet to have any lifeform get to the edge of the map, or anywhere close, without glitching out the physics of the game to do so. If the simulation does reach a point where lifeforms are traveling (I think its 500 units) to the edge, I'll just make the map repeat itself.

Injury is an interesting idea. Hadn't thought of that. I was thinking about doing energy though. So, he has a set amount of energy to spend. Could help for making more efficient movements.

Thanks so much Scott for your comment and ongoing support! Also, I really appreciate the donations! I'm glad to hear that. I really enjoy making things like this, probably almost as much as I do playing with them. It's nice to see that others are having fun with them too.

I love Lua too, and good news, that's what I'm using. For everything before this project I was using Love2d, which is a framework for making 2d games with lua. For simple things I would recommend it. The wiki is really simple and there is a big enough community that you can find your questions already answered somewhere 9 times out of 10. I definitely tested its limits at times. I don't know much about Codea though.
Lua is actually plenty fast because of luajit. For Evolpedal 3D I needed some real 3d physics to make it work, so I went looking around for other open source engines. I found some good ones but ultimately settled with Urho3D because it also has lua bindings. It's incredibly snappy and intuitive. I'm likely going to stick with it even if I do more 2D games. Leadwerks also uses lua but it was pretty buggy and slow. There aren't a ton of options for 3d game engines with lua bindings. I could always get better at Python or C++, but this is just a hobby so I'm focusing more on what's fun for me.

Just looked into Codea a bit. It looks like you should be able to make similar simulations with it. The thing to keep in mind is that if it does have a bottleneck somewhere it may hinder your progress. Some of my other ones, like Polysporia, can easily get laggy with lots of lifeforms. That may also be the case with Codea, or it may be worse. If you know it pretty well already I would push it to the limit and then only then think about switching.

That's a good idea. In that case for both mass and node mutations.

Haha yes! Because the figures are humanoid the random mutations are going to be really goofy looking as they flail around. My current evolution is doing ballet on its toes to try to get farther.

Well so far so good. Urho3d is very fast. You can use C++, Lua, and I think there is a C# variant. I'm specifically using it because I like Lua and was looking for something lightweight. I also don't use editors, and it's very simple for me to just code and run without compiling (because luajit). It does have an editor, though, but I haven't used it.

I think most people have trouble installing it from source and so it isn't very popular. After reading the documentation and scripting api over I have a pretty solid grasp on it. Everyone keeps saying it has clean and concise code and I'm inclined to agree. The built in gui/menu system is awesome. If you're looking for lots of examples and prefabs and stuff, stick with godot. Though the U3d community on discourse is pretty good about responding for support.

If you download the binaries, there's a folder with precompiled examples. They're a little silly but you'll be able to see how well they run on your machine. Godot was slower for sure when I used it. But I'm using integrated graphics on a laptop, yet still getting great 3d frame rates with u3d.

Might be worth checking out! Let me know what you end up making, I'd love to see it.

Hello and thanks for reaching out. I'm actually on MX Linux myself. This version of Evolpedal was made with Love2d, so there isn't an easy way to package it for Linux and have it run the same everywhere. The reason being, when linux users update their version of love, which is required to run it that way, it can break the game. Some user's repositories are old and others are newer and the changes to the framework can sometimes be dramatic enough to totally break the game. In linux, it'll just tell you that it was made for a different version of Love2d. The game should run just fine with WINE. When I distribute for windows, the .exe has a copy of the relevant framework version and dll libraries, so it's portable. It unfortunately doesn't work that easy for linux.

So, for the time being, if you just would like to run the game on your distro, download the .exe and rename it to .love. Then run

sudo apt-get install love (or the equivalent for your distro)

to install the framework. Then, you should be able to just click the .love file and play.

That said, if you know how to make an AppImage, or have an idea of how I can make a similar, portable linux app out of this, I would love some help with that!

The newer version of Evolpedal (a 3D remake) that I'm working on is with Urho3d, which will let me much more easily distribute cross-platform, even to android, which is cool. Plus it's way faster.

Just made a little cellular automaton over the last few days. I'm pretty proud of how it turned out with minimal effort. It's a grid system of cells that abide by a set of rules and interact with each other. Even just a handful of rules can create stunning results, the most famous example would be Conway's Game of Life. This simulation is inspired by Wireworld, a similar variant which allows for easy digital circuitry. You can even make logic gates and theoretically a computer within the simulation. The background grid is infinite and the game runs very fast, even with 18,000+ cells active. It's free, so go tell me what you think. I'll be adding some other colored cells and functions for them soon.

Hey, no worries. I used LÖVE2D, which is a framework for writing games in lua.

Thanks, really glad you like it! When I was making/testing it I was leaving it running for days just to see how things ended up. Perhaps it's due for an update sometime.

Evol's Sandbox is a fun little particle simulator I made over the last few weeks. It's available for purchase now, though I marked it as in development while I continue to add on to it. You can create caverns, erode soil, plant seed, grow roots and flowers, add fire, add a bee colony, make a waterfall, and more. If you ever played the "falling sand" or "sand game" old flash games, you'll probably like this. I'm still adding to it, so if you have a good idea for a new particles (like rain or frogs) or some other cool feature, let me know. I wanted to release this before I felt it was done because I want to see what everyone thinks about its direction. Other particle simulators tend to have emphasis on explosions, and others on nature. I want to develop new features in the direction that most everyone is interested in. 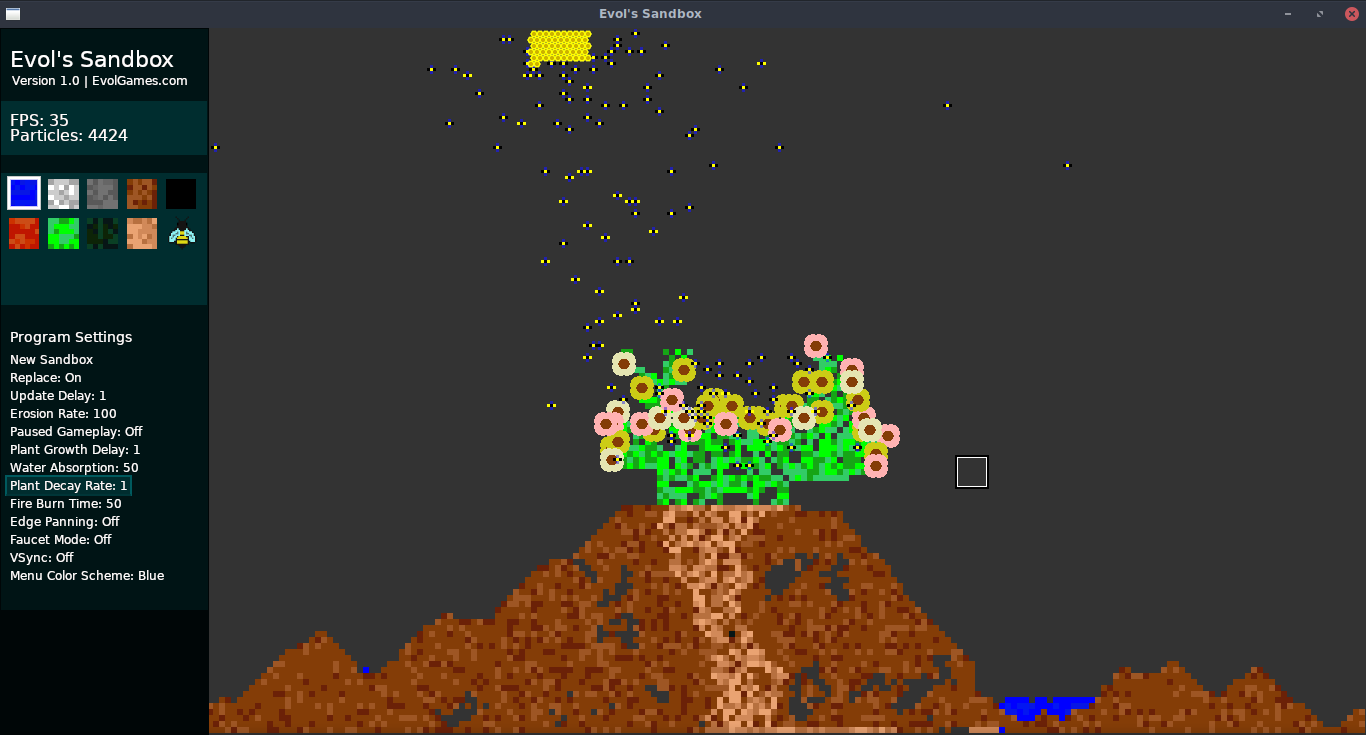 Organisms compete and fight for resources and survival. Over time, they evolve to match their environment in unique ways. Every time you play the game it is different, and you will never experience the same thing twice. I have created the physics engine from scratch and each organism has huge potential for complex movements and evolution.

This is cool. What did you code this with?