Our Pantheon community · Replied to Calebbi in Share Your Worlds!
D. W. O'Boyle26 days ago (1 edit)

Awesome looking though! I had not considered hexes.

It does look too big. In the next release version of the game I recommend a map of 12 columns and 8 rows. I find that size is kind of a goldy-locks zone where it's big enough to get a lot done but still requires players to interact a lot more.

This is so simple and a lot of fun! What a chill little puzzle game.

This is silly and a good time waster. My computer does not like it when it make the tower really tall.

Thank you for the feedback! I don't think I'll ever claim to fix ALL the typos. haha. I've definitely noticed some more in the months after that release.

The differences between 2.0 and 2.1 are small. 2.1 was more of a "balance patch".  The next version is going to be essentially a complete restructuring of the game.

I'm glad to hear that you enjoyed it! Please feel free to share the world you both created in the Share Your Worlds thread if you would like.

Hello! I played through the demo and really liked it! So much so that I didn't see the "Thanks for playing message" until after wandering the whole map for like 20 minutes. haha!

Regardless, I'm excited to see where how this game develops. It's really promising so far! 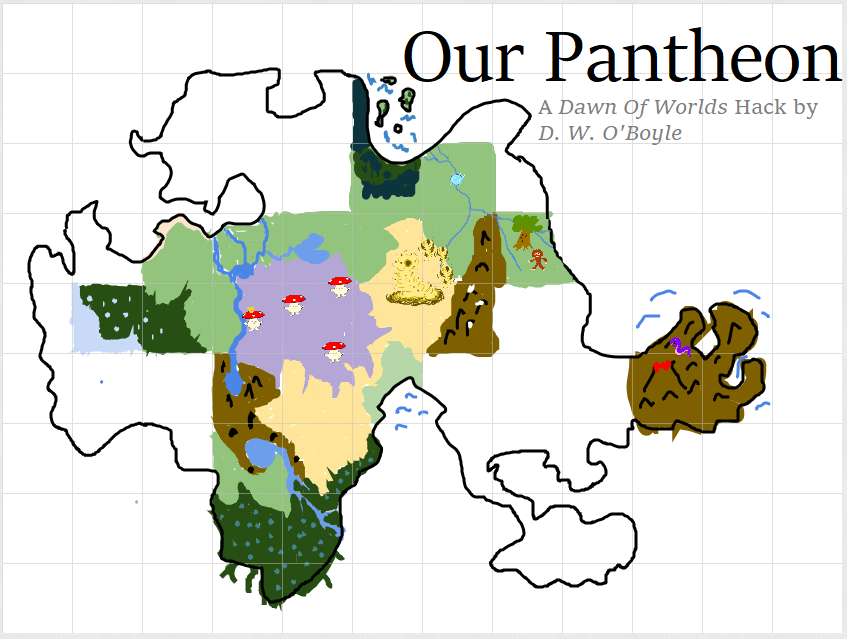 Over the passed year I've been working on a hack of a game called Dawn Of Worlds that I'm calling Our Pantheon.  [LINK]
It is pretty much a complete overhaul of the game it's a hack of, modernizing the language and borrowing systems from other games like PbtA and Microscope.
In this game you play as gods creating a world from nothing. You draw the map, create the inhabitants, and influence their cultures. I say "influence" because the gods do not have complete control over mortals. Dice rolls and the Chaos phase prevent the gods from having everything go their way.

Features:
- Free
- GMless
- 2~6 players
- Great for creating a world to be used for a campaign

If you do check out please feel free to give me some feedback. I've only be able to do a small bit of play testing. I'd love to set up a time and date to do some official play testing if anyone is interested.

This is a hack of Dawn Of Worlds. In it, you play as gods creating a world. You draw the map and create all the civilizations. My hack largely seeks to modernize the rules and language of the original. However it also has an extra twist called the "Chaos Phase" that lets players explore the world and cultures they created from a more mortal perspective.

Our Pantheon also draws a lot of inspiration from PbtA games and stuff like Microscope.

This is a thread to share the worlds and stories you've made with this game! If you played it for an Actual Play this is where you can post a link to it's session/episode/podcast/etc.

I have a whole lot of various sounds on my freesound.org page: https://freesound.org/people/DWOBoyle/

I'm looking to host my very early builds of my current project on itch.io and want to set up a sign up sheet (probably through googleforms which would likely include a light NDA of some sort) as a way for folks who are interested to receive their keys. The plan would be to have a page on itch that provides information regarding the game, hosts dev logs, host community boards, and provides a link to the sign up form. Ideally only those who have signed up (or have a key) would be able to download the game and view/post in the community boards, but the game page and dev logs would be public.

However, reading through the documentation I'm not 100% certain on how to do that. Seems like I may have to make two game pages. One that is public and one that is restricted.

I figured folks could just reply to individual posts to build off ideas. :D

I thought it could be a fun idea to have a thread where we share some ideas that never found their way into games, never got passed the initial "this could be fun" stage, or you just haven't had time to work on. Maybe they'll inspire someone else use them, or you'll find that someone already made a game like it.

A game where you play a civilization that discovers am unmanned exploratory satellite and have to make sense of culture that sent it based on what they included in it.

It's clunky and really designed for stuff like DnD type games first. That said, after about 200 hours across various games and reading the documentations every few months, I finding Roll20 to be pretty good overall. It does everything to some extent, even if it doesn't do it all well. (especially cards! Gah the card features are so limited!) I'd really love a better alternative, but am glad at least something like it exists.

As for alternatives? I know some folks actually use Tabletop Simulator.

My politics are all over my games and, hopefully, pretty bluntly. Still I do want to make games that anyone is welcome to play as it's not like I will be sitting at their table playing with them very often. That said, I have no problem putting things like "if you believe *this terrible thing* maybe don't play my game or join any community that comes up around it."

it's basically Slack or IRC with slightly friendlier UI. Users can create their own servers and those servers can have different text and voice chat channels. Pretty easy to set up and use, but it certainly has its own quirks and idiosyncrasies.

There's an official itch one if you want to see how it's set up.

The Skeletons - From the folks behind Fiasco. Another GM-less game. It's about playing some skeletal guardians of an ancient tomb who defend it from adventures and other intruders. It's a lot more meditative and quiet then the description, but you also get to draw some skele-friends. I really want to do a hack/expansion for it, since the game-as-is is a bit content-lite for multiple play-throughs.

Goblin Quest - This is a game about goblins going on a quest of the utmost importance. It's silly and has a lot of cartoon violence. It also comes with a lot designer made hacks that I've never played but always wanted to.

I have a regular group that I usually play one-shots or short campaigns with on the weekends. If I find something that interests me I'll usually post it in our discord to see if anyone else wants to give it try. Sometimes we even play it!

Final Bid - It's a diceless, GM-less game about spending your character's resources to gain narrative control. I've only really played the "1st Edition" (ie when it was just Law's Out), but it really got me to better understand how games could use character sheets.

Reply
itch.io Community » Tabletop Gaming » General » Discussion · Posted in When is the last time you used a forum?
D. W. O'Boyle1 year ago

What's interesting to me is how many people have such long gaps in forum usage. I've pretty regularly used forums for most of my life. Even in the advent of more commercialized social media like Facebook and Twitter. I'd count Reddit (as cursed as it may be) as just another forum/message board though.

A lot of smaller gaming communities have survived or sprung back up as message boards in recent years (examples: Giant Bomb and Waypoint). Then there's always stuff like Something Awful, which is actually where I found a lot of good indie TTRPGs stuff and groups to play with.

I've been making table top and video games for basically my whole life. I've been using itch.io to host my video games for years and am very glad that it now has a table top community. I have not released any of my TTRPGs on itch yet, but will be looking for playtesters in a few weeks for some of them. When it comes to TTRPGs I'm very interested in GM-lite and GM-less games that focus on cooperative storytelling as I grew up mostly exposed to very rules-lite play-by-post forum roleplays.

I definitely agree with your thoughts on the puzzle element at the moment. While I like the current chaotic-ness of it, I wish I had more time to implement and test so of the other key mechanics. Even just limiting the randomization would help would make the puzzle element more active. Right  now the only manipulation to the RNG I have is when POW blocks spawn (3rd from the start, then every 5), but it would probably be a good idea to make where they're going to spawn more predictable.  Also having specific sets of blocks that spawn that's biased based off what's in your field instead it being completely random.

The other big thing was actual powers that can manipulate both play fields. Basically the idea was there would be a bit of UI in the center that would say something like "Next Power" and it would go to who ever hit a POW block next. Then you'd be able to trigger when the power gets used via the face buttons.

They would be a mix of pretty standard Arkanoid styled power ups, stuff you'd see in games like Tetris Battle Gaiden, and some ideas I haven't quite seen elsewhere (but they've probably been done before to be honest.) Each power could be used on yourself or your opponent with slightly different effects depending.

So the whole strategy would be almost more about managing powers and knowing when to use them on yourself for points or protection or using them offensively to trip up your opponent.

As for the strategy you mentioned. It certainly wouldn't be a very high scoring method as your combo resets each time your ball hits your paddle. But in the current form there's not really much room for strats other than "yo, be good at breakout!"

But yeah, it was definitely a lot of fun to work on and I'm thinking about ways to expand on it.

Thanks! Yeah, I didn't really have time to put in much actual GB related stuff other than being inspired by the competitive puzzle game streams they do. I guess I could have made the blocks their faces or something. I more just wanted to get the idea out.

Nicely done. I wish I had better reactions. Can't get more than 2 points.

Very nice looking game. I wish the music didn't start over when you died.

Feel free to check out my game, Void Wisp.

If you want you can check out the High Score Challenge that I've issued youtubers. More info here!

You're more than welcome to check out my game, Void Wisp. It's a simple two button runner where your earn points by grinding a long obstacles. The closer you are to them the more points you earn, but you crash if the center of the Wisp contacts an obstacle.

I've also have issued a challenge to any Youtube LPer to beat my high score. More info here.

Good luck with you're channel!!
~D_W

I wrote up a very long blog about the design philosophies behind Void Wisp.

Hey. I have a new video showcasing some of the procedural music: Check it out here. https://www.youtube.com/watch?v=5Hv4EsJUfKo

Hey! Thanks for doing a video! This game should be regularly updated so feel free to check back in again to see how things have changed.