Game looks good.  I feel like giving it away for free could devalue your work, when its clear that you've put a lot effort into it. Maybe consider releasing at a lower price point for early access and increasing it after final release?  As far as your dream of finding a way to make games without worrying about them being products, I've seen a few devs doing well releasing games on here for a few $$ each and also making all of their games available for no extra cost to people who support them on patreon (eg Sokpop and PuppetCombo), so that could be a potential route, although I'm not sure how viable that model really is. Also, this model seems to work better with multiple small games that only take a few weeks or months to complete, rather than larger projects like yours.

Just Fishing is just a game about fishing. After you're plane has crashed in the middle of the Ocean, your only means of survival is a fishing rod. From a nearby rock, you must sit and fish to pass the time and to keep yourself alive. Surprisingly, fighting for your life can actually be pretty chill.

The game has 2 game modes to choose from:

Survival:  With a timer counting down to your demise, you must catch fish to gain more time. Each fish adds a varying amount of time, small fish offer 5 seconds, medium sized fish offer 10 and large fish awarding a whopping 20 additional seconds of sweet sweet life.

Peaceful:  It's just fishing, but without the shoe horned timer mechanics that I added to match the theme some what. Just relax and catch some fish.

How to play: Left click to cast your line, left click to reel it back in.  When a fish is on the hook, smash left click repeatedly to reel it in. Larger fish require more clicks and will stay on the line for less time. Pull up with the mouse to reduce the number of clicks needed.

You can press 'R' to restart at any time and 'ESC' to exit to the main menu.

Be sure to check it out, and if you have also entered LD46 rate the game at https://ldjam.com/events/ludum-dare/46/just-fishing.

If you leave a comment on the LDJam page I'll be sure to check out and rate your game :)

should just need to spam left click really fast when the fish is on the line. The larger the fish the more clicks it’ll take

@Karl_Savant Hi, thanks for your interest in Undead Valley.  I'm still working on the game, however I'm  doing so alongside university, a job,  freelance work and other projects, hence development can be slow at times. I've recently been re-working the character controls (although I am not 100% sure I like the way the player controls at the moment) and am working on building up a new area on the map, as well as fixing some issues from the previous build. I'll hopefully be releasing an update by the end of the month.

Sorry for the lack of development updates, I will make an effort to make monthly posts to update everyone on my progress from now on. Again, thanks for your interest in the game :)

Based him off of a true brexiter

Thanks for the feedback. Will hopefully get all of these fixes made for the next build. :)

If you make any content that is about Undead Valley please post it here. This includes, videos, streams etc. I will make sure to look at pretty much everything that's posted here, and hope to see plenty of really cool Undead Valley related content. I will also be sharing everything posted here on my twitter (@DrunkardWolf)

Hi, thanks for purchasing and supporting the game and thanks for  the detailed bug report.  Many of these bugs are currently in the process of being fixed and the next build, coming sometime within the next week brings a bunch of optimisation fixes, bug fixes and I will  add an option  to turn the rain off sometime today.

In relation to the movement controls, I understand where you're coming from, however, I have re-worked them several times now and the current controller is the only one that feels right due to the perspective and the rotating camera. I will continue to look into other options though.

Also, In relation to shooting the Zombies 5 times to kill them with a pistol. Again, due to the nature of the game being top down, unlike a first/third person game, there is no way for the player to hit specific body parts, meaning every shot is essential a headshot. Because of this, I decided to opt for each gun dealing a set amount of damage. The pistol takes 5 shots to kill, but more powerful guns such as the Sniper can kill in a single shot. I may work on a system that allows for some shots to have a chance of being critical, and then add a perk to increase the change of getting a crit at some point though.

In relation to the zombie 'ghosts' killing you, I've never head of this bug, and have a feeling you're dying from blood loss. When Zombies hit you, you start to bleed, which will kill you If you don't use a bandage or a med kit. I'll look into the issue to make sure that this is the case and will also work on making it 1. more obvious when you are loosing blood and 2. Less harsh, as I do feel that the player currently bleeds out too fast.

Also, like you said, some of the building interiors still need work. These will slowly improve as the game gets closer to its completed state. And, in relation to the bug where you clip through walls, I'm still looking for a fix to this. It won't be fixed in the next build, but I am actively working on a solution.

Hi, thanks for the comment! Not really sure what you mean though, do you mean make it so A/D move you left/right?  Because if you mean it should be WASD instead of the arrow keys, that is already an option.

29/07/18 - Build 0.0.5 should be coming out within the next few weeks. This build will bring a lot of optimisation stuff, a new zombie type, some new NPC's and quests and some further development of the map.

1/08/18- Been working hard getting closer to the 0.0.5 release. Should be coming out sometime within the next week! Here's a small preview of all of the changes made so far!

Yep, a few people have said this and it is something I am actively working on. I have a pretty powerful pc, so I could only test it on my hardware, which runs the game well.  It's my first time making something on this scale, so optimisation is new to me, however the performance should be better for the next build, and will progressively get better with each build.

Any chance you could tell me your PC specs too? Would be greatly appreciated.

Thanks for your feedback, means a lot. :)

Hey everyone! I am currently developing a singleplayer Zombie Survival RPG called Undead Valley (small plug: pre-alpha is available to try on my itch page). However, one issue I am having within the development is making it so the game is engaging for longer periods of time. A problem a lot of people seem to have with survival games is that they can get boring quite fast, many of them being a lot of resource and bar management (eg. need food to keep hunger bar up, need water to prevent thirst etc). Some games in the genre however, manage to keep the player engaged for hours of play, and keep them coming back day after day. Personally I feel like this is often achieved by allowing the player to set their own goals to work towards, however this is something I am struggling to capture in my game.

If anyone has any thoughts, or could share what keeps them engaged in a game, it would be much appreciated.

Have any suggestions for Undead Valley? Post them here! This includes any ideas for new enemy types, quests, areas, items, or just generally anything that you think will improve the game!

Suggestions are greatly appreciated, as they improve the game for everyone, plus its always fun to implement suggestions from the community.

Please post any bugs you discover when playing the game here. By reporting bugs, you make Undead Valley better for everyone, so it is greatly appreciated.

Undead Valley is a Zombie Survival game with an isometric perspective and a voxel art style. The game is still in development and this is a pre-alpha playtest to get some opinions and is a preview of things to come.

The game is currently in a very unfinished state. I have released this Pre-Alpha build to get feedback from the community on how I can improve the game going forward. So, If you do decide to give the game a go, please let me know your thoughts. 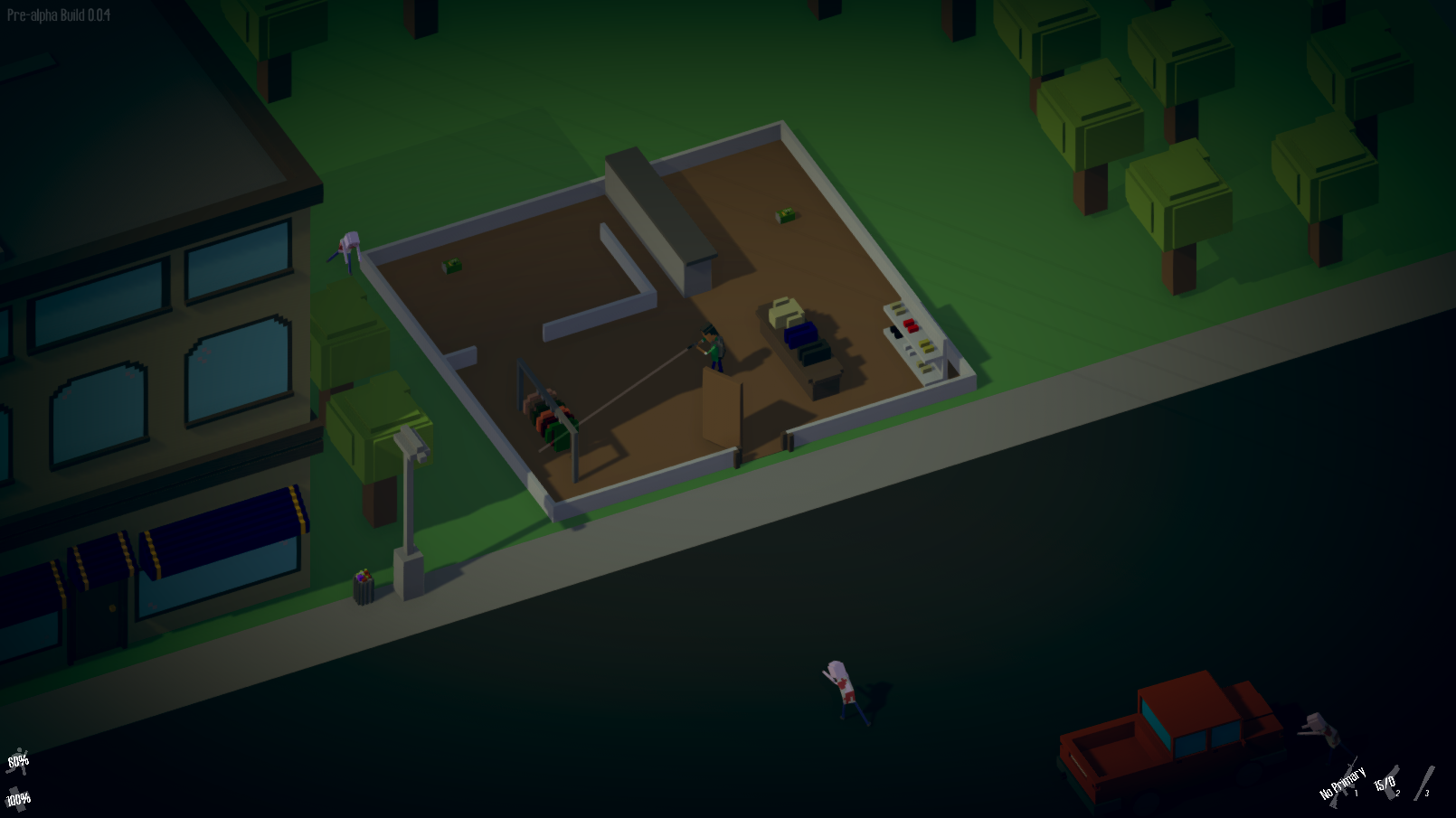 - Scavenge for supplies to survive the end of the world!

- Keep your car in good condition to ensure fast travel around the world. 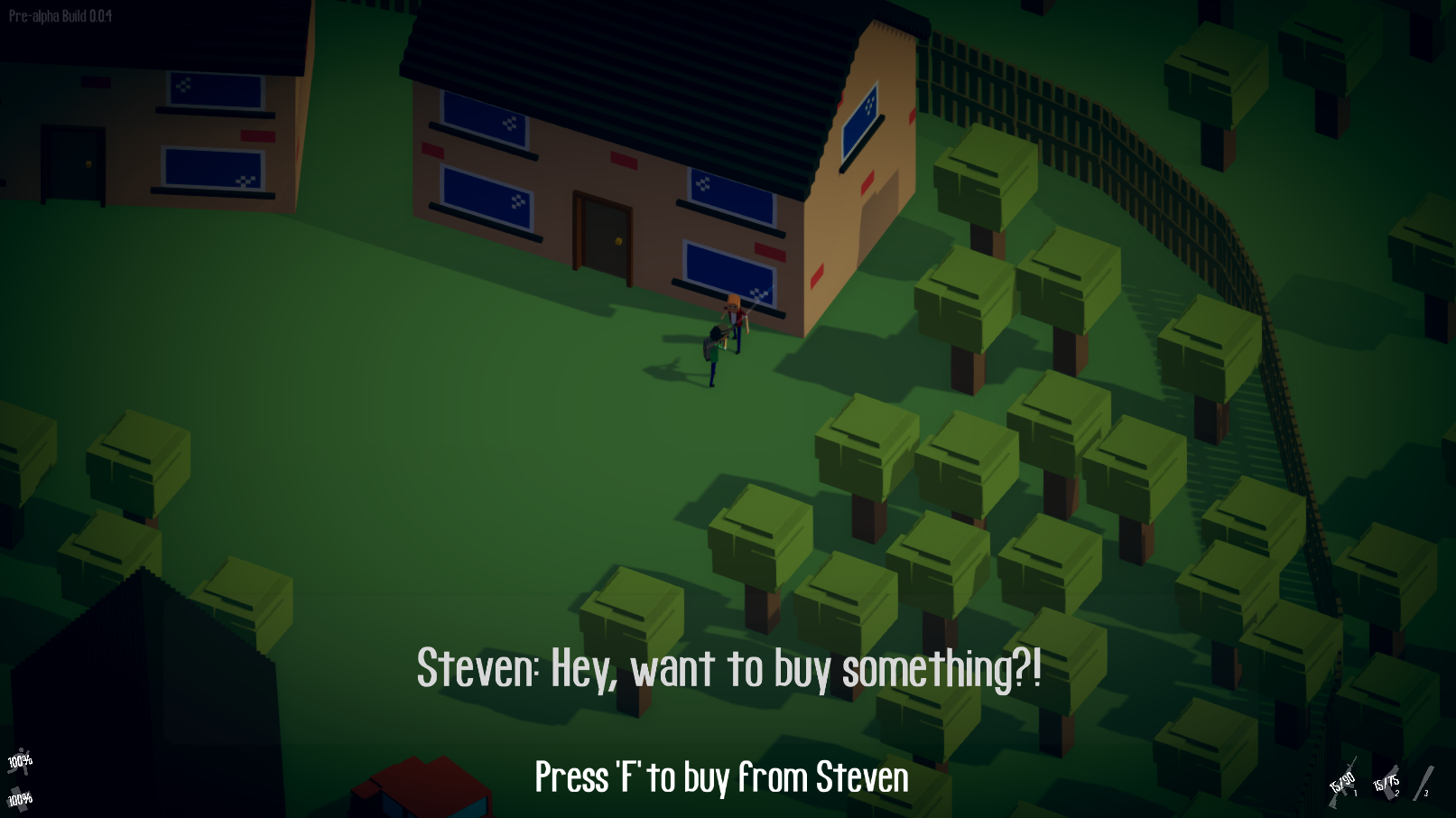 In its current state, the game is still far from perfect, hence I have put the game on a pay what you want model. However, once the game is finished, I plan on selling it for around $5.

For now however, the game will be free to play for the foreseeable future , hopefully with  frequent builds full of new content.

Popular YouTuber eNtaK uploaded a gameplay video! Check it out:

Hey, to everyone that's commented in the past couple of weeks, sorry that I didn't reply to your comments, I've been on holiday. Glad you all liked the game. I will try to get a download link on uploaded asap. Thanks for playing :)

The song is Space Fighter Loop by Kevin MacLeod, and as far as the errors are concerned, I'm not sure why your getting them, I haven't encountered them before, but I'll look into them. Also, I'll take your suggestions into consideration for the future, but I'm not sure If I'll bother adding them to this game, as I'm currently busy on other projects :) Thanks for the feedback <3

Hey, thanks for playing :) Most of the projectiles have set spawn points, butspawn in with random speeds, as well as that, there is one spawn location that moves. Had to put that in to avoid people finding a gap in projectile spawns and staying there.

this version of the game is by no means a completed product, there was many things that I had planned to add including everything youvesuggested. Unfortunately however the game is no longer in development and at this time I have no plans on picking up the development of the game again.

Not yet, I've got exams for the next couple of weeks, but after that I'll try making a tutorial. Can't promise it'll be great, but I've got a few requests so I might as well :)