Awesome job on this tool! It saves a lot of time when you need retro sounding sound effects fast, and they sound great too! :D

I don't have the old version anymore, but if it was already laggy back then, I suspect your computer might not be fast enough to handle the game. Sorry about that.

Well thank you very much :D by all means, have a bite! These bricks are mochi flavored :P

Yeah I didn't have time to balance the game so it turned out incredibly easy. I'll fix that in the next update :)

Oh damn! Thanks for the heads up, I'll look into it!

I wouldn't recommend it if you want to make it for the jam. It's significantly harder to make a first person game than a 2d platformer game. You would have to learn 3d even if the sprites are all in 2d, because the game takes place in 3d space.

I see, it makes sense. Thanks for clearing that up :)

Thanks for the nice comment! I wish I had time to add more things to do, but I'm glad someone can at least enjoy it as is :)

Thanks for the review! You're doing pretty good actually ^^

Thanks a lot! I'm glad to see that despite everything, people like our game :)

Thank you for the review, glad you liked! I know there's not a whole lot to play with yet, but I'll add more stuff soon, so stay tuned 😄

Reply
Finally Finish Something 2020 community · Replied to TinyGamesLab in Share Your Progress!
David Jalbert1 year ago

Ooooh, this looks fun! You did a great job, especially considering the limitations of Pico-8!

I can't believe I managed to get to the finish line, but here's mine; a small collection of gadgets packaged in a small cozy apartment.

It barely qualifies as "finished", but it works, doesn't have any major bugs, and I intend on continuing it in the near future. 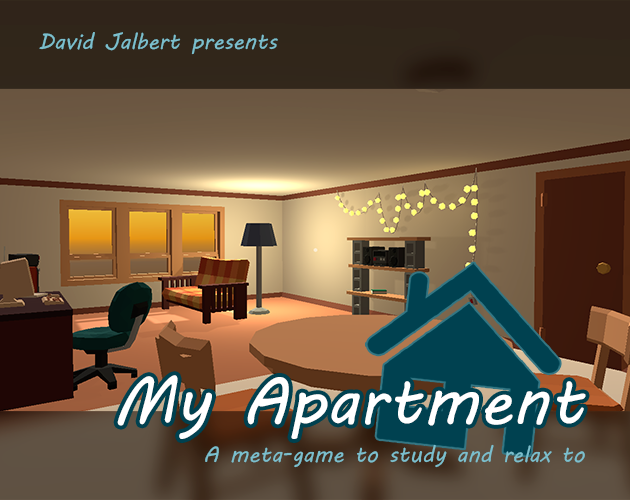 I'd like to join, but I want to use Unity. I only have the free version and it displays a mandatory splash screen when the game starts. Is it okay if that part isn't in a 64x64 resolution if the actual game is?

Thanks for the report! It's a known bug actually, so no worries, the next demo will resolve these issues.

Currently there are a few known places where this bug can be reproduced. It's because the character won't jump at all when it's not standing on stable ground, so it gets stuck when it falls in a tight gap. It was originally done this way to avoid being able to spam the jump button to climb steep surfaces. I rewrote a large portion of the character controller since, so you shouldn't encounter that bug anymore in the next updates.

Thanks a lot! We do our best :D

This game in particular couldn't be optimized any more without using a completely different engine, I'm afraid. But we might make a spin off for low end systems eventually.

I see. Unfortunately, I'm afraid your computer falls under the minimum requirements of the game. We recommend at least an Intel Core i3 2100 and a GeForce GTX 460, or similar. We'll update the game description soon to include the system requirements.

Thanks for reaching out. Can you post your computer specifications, including os version, cpu and graphics card?

Hello everyone! My name's David Jalbert, I'm a Unity developer and C# programmer, and I'm currently for hire!

I've been working in the game industry for many years now, starting with Flash games back in 2010, and I've been working with Unity since 2015, which has since become my tool of choice for making games. I can also code in C++, C#, Javascript, AS3, or whatever your game requires.

For the past year, I've been working on Krankenheit, a fast paced classic first person shooter. A demo is available at https://davidjalbert.itch.io/krankenheit

My wage is negotiable, just let me know what you need and we can discuss. If you're interested, you can contact me at jalbert.d (at) hotmail.com.

I'll give the same answer as CD Projekt about Cyberpunk 2077; it'll come out when it's ready :P
Seriously though, I have no idea. We'll launch a Kickstarter campaign soon, if that counts for anything.

Does anyone happen to have numbers we could compare? Having 25% more views on an HTML5 game makes less of an impact than, say, 1,000%.

Then again I might just stick to MonoGame. They're apparently working on an HTML5 compiler thing, although it's going to take a while I reckon. I just like being able to code in C#.

Thanks for the answers!

I guess it makes sense that in-browser games would get better views. My main gripe is that in most cases, you have to choose between a stand alone build and a web build. Unity has both, but the webgl exports are often super slow and buggy. I might look into Godot, though, I've heard good things about it.

Hi guys and gals! I've been working for a couple years on a first person shooter that I'm planning to release on PC and consoles, but I've also been considering making smaller 2d games on the side, like platformers, short action adventures, maybe even a small rpg. I want to do it just for fun and to take my mind off my main project. However, I've been wondering if people would rather play these smaller games in their browser, that is, with HTML5, or on their computer, using a good old stand alone executable? Basically, is there a side that is clearly more popular when it comes to small 2d games?

Thank you so much! It was a blast to watch! Literally :P

Thanks a lot for the review! We're working on a proper save system, so you won't have to do the entire level in one perfect run, and the enemies are going to get a better AI system as well. And our level designer is still learning the ropes, so on his behalf, sorry about the bus :P

Thank you for the review! It's always a pleasure to see people playing and enjoying something on which you worked so hard :D

(Text below is taken from our devlog, please pardon the copypasta)

After a long time in the making, Krankenheit finally has its first public release!

This was supposed to be an early access release but we decided to make it a free demo instead. We would like to offer some more content and quality for a commercial release but we still wanted to put the game out so we thought that would be the best thing to do right now

So about the game - We want to create a solid classic FPS with gameplay based on player's mobility, rich selection of interesting weapons and handcrafted three dimensional levels.

The demo is an early prototype of the game featuring one non linear level with secrets areas and alternative paths, 4 types of enemies and 5 weapons.

The full game will most likely feature around 10 weapons with alternative attack modes, 30-40 types of enemies (including some bosses), each with several attacks and abilities and multiple death effects and animations. We are also experimenting with destructible environment, creative use of powerups, and also many mutators and game modes that can drastically change the way the game is played.

The main game will consist of three independent episodes. Number of level per each episode is not yet determined, but it will probably be around 5-7. Depends on how efficiently we will be able to playtest them all. We also want to have several standalone levels for different game modes.

We currently have no plans for multiplayer as we want to focus on delivering a solid base game.

We have plans for a dedicated cheat menu that you can use to experience the game in a whole new way.

Things that are not working perfectly right now - player controls and movement physics, enemy AI, stability and optimisation. We are still working on that. Visuals should get more crisp and detailed in time and the level design more improved and refined with every new level.

There is a story and narrative behind what's going on in game but it's not the main focus here and the gameplay will never be interrupted for the sake of exposition. there will be a way to understand what's going on but following the story will not be necessary to play and enjoy the game.

Have a comment about the game? Want to show us some love? You're in the right place!

Have a feature you'd like to see in future updates? Let us know here!

If you encounter any bugs, that's the place to tell us about it!

Hi Romain! Your work is pretty impressive, I like it! I would love to have you on board! Just to make sure we're on the same page, you know this is for a collaboration, right? I can't pay you upfront, since this is primarily for a game jam, but I plan to make a more advanced version after the jam and sell it, so I could offer you some revenue share if you're up to it.

If you're still interested, you can contact me on Discord at "DavidusPrime#2293" or on Skype at "diejayflash".

You can check on VectorBoy's progress and inquire about bugs and future features on the "Fantasy Consoles" Discord channel by following this link; https://discord.gg/kUvBKFH

Currently, all inquiries about VectorBoy should go in the "other-consoles" room.

I'll check it out tonight. Thanks!

Pico-8 is my favorite, but the price is a bit steep. TIC-80 is a nice alternative.