Indeed - the latest demo is available on GOG and Steam,

Yeah, I have full creative freedom on the game, so the game's still "indie" :)

We'll see how it goes with the Linux build. When I'll be releasing the next demo, I might be building a Linux version as well - with no guarantee it will work from the scratch.

That being said, I recall someone confirming that it works on some Windows emulation software with no issues.

Yeah, I don't like rats - that why I am making a game about shooting them ;)

It's Unity. Allowed me to use the same programming language (C#) that I'm using in my day job.

Thanks! Nah, I did not consider porting it to mobile - at least not until I finish the PC version, which might take some time ;)

Hi! I played through the latest demo and here are some of my thoughts:

1. At the very start I didn't find a way to speed up/dismiss the tutorial dialogues. Only later in the game I found out it was "P". On the other hand, some dialogues (the ones that appear at the bottom) can be dismissed by the "ESC" key.

2. In my opinion the game would benefit greatly from having a mouse support. And I am not only talking about the inventory/skills UI, but combat as well. I wanted to use the mouse for attacks all the time, and "E" for interaction.

3. I am not sure whether I missed it, but is there a visual indicator of how many healing potions I have left?

4. The fact that attacks use my stamina was slightly annoying, as I did not had the possibility to execute some combos. I guess I played too much Children of Morta...! ;)

6. I am not sure where the crystals were coming from. At one stage, the demon gave me some? Were there related to XP points?

7. The auto-gathering range for the xp orbs could be bigger.

8. I did not find the stone that the game was asking me for. I thought it was the big portal thing, but it turns out that's not it, I think.

9. The plane-shifting mechanism is a nice thing! I hope that you will expand it. Right now it is useful for ignoring some obstacles and killing enemies in the different plane. Is there a benefit of killing these enemies?

10. The skills ui was not giving me clear information on which of the skills I could unlock. They all seemed grayed out for me.

Overall, the game gave me a very relaxing vibe; reminded me of Ada (https://hazygd.itch.io/ada), but this one is more polished. Also, the music and sound were very nice!

Good job! And thanks for sharing a demo!

Oh yeah, there will be violence in Shardpunk, and there's nothing we can do about it :)

Yeah, having a child-friendly mode might be customization option. What about other stuff, like blood or overall violence though?

Many thanks for such rich feedback!

Yeah, I did receive info about the sounds being on different levels, with some of them being too loud and others too quiet. I am planning to level them out.

I am a little worried that you did not notice the highlight on the active character, as it is there. It is not very bright, but it is animated to make sure that the player can see it.

Characters did have their "personal lighting" in older game builds. Basically each character model had a light source of their own. However, this looked silly as the models did not have any light sources displayed (no flashlights, etc.). I might revisit this approach in the future.

I did try the LMB movement approach (as several people were asking about it), and it did not work well in the game - I kept on accidentally moving a character when I misclicked an action button. That being said, key bindings will be customizable in the end.

Performing the attack by clicking on the enemy has been reported multiple times, and I am definitely adding it.

You made a good point about the lighting/colors. I do want the game to be dark, on the other hand I don't want it tu suffer from poor contrast. I already started increasing the contrast of some of the map tiles and the results are quite nice.

And thanks for the "tactical lighting" idea! Throwing a flare might increase the % to hit enemies. Or, if we assume that rats are afraid of such artificial lights the player might receive a way to effectively (yet temporarily) block enemy movement.

Hi - thanks for this.

I am aware that the contrast should be bigger. Now that I am aware how the lighting affects the contrast I will surely be altering the colors, at least for the future tilesets.

About disabling the camera mouse edge movement - I will be putting this as an option into the game.

I didn't play Overland, but I watched some gameplay videos; and yeah, I might be going for a similar vibe.

Believe me, I myself was pretty hyped for the base concept as well; however, after a few playthroughs I wasn't able to find too much fun in it. Hopefuly I will be able to extract more joy from the new approach.

Thanks for that! Be sure to follow the game's devlog/mailing list to get information about the next tech demo release!

No problem! Looks like Unity is able to port the game correctly, assuming I will be sticking to some rules (e.g. correct format of file name paths).

Note to all Linux users: we've managed to sort this out thanks to discussions we had on Discord - the Linux version is now available and working.

Thanks for the good words and for the feedback! Also, consider filling out the survey linked in the tech demo!

I hear you. I uploaded a Linux build, so do check out whether it's working.

Have you tried running the game on Linux? I made it on Unity and it might be that it will simply be working - I haven't tested it on Linux.

Thanks for that! I was hoping to receive some feedback on the game - that was the reason why I decided to release the tech demo - and it looks like I got just the stuff I wanted!

Here are my comments to some of your input:

Thanks! Credit goes to Kurt (https://twitter.com/cKURTain), the freelance artist who was the main UI designer.

This one is mind-blowing - the armored soldier movement sound is the one that I dislike the most :) I guess it's all a matter of taste.

GO-There could be commanded by the LMB

I believe it should be configurable. Mutant Year Zero is using LMB, XCOM uses RMB. I spend more time with the latter, that's why I've decided to use it.

That's an interesting point! The weapon heat mechanism was not supposed to allow auto-cooling at all. Player needs to manually reload the weapon to cool it down. That being said weapon being cooled down by itself seems like a normal thing that should be happening. I will surely be putting more thought in to the cooling mechanism - especially as I want to indroduce some more depth to it.

Congratulations to the Family Enterprise! Saw your family in the credits. KUDOS for the achievement: making them work!

Haha, thanks. That is what family is for, right? ;)

Again, thank you for fantastic feedback - I will surely put it into good use!

Yeah, it does make a difference, right? Sadly, I am unable to remove these popups from all the situations that require some explanation. But maybe I'll find a way in future iterations :)

Thanks for the good words!

Thanks for that! It really means a lot to me.

Hi - as my hobby project is already in a fairly advanced state, I decided to showcase it on itch.

"This is The End" is a squad based strategy game - a mix of xcom and darkest dungeon.

I would love to hear your feedback - check out the project page (https://bryqu.itch.io/this-is-the-end). I plan on releasing a tech demo in 2019 - and for now you can follow my devlog, where I'm posting important info about the game development progress. 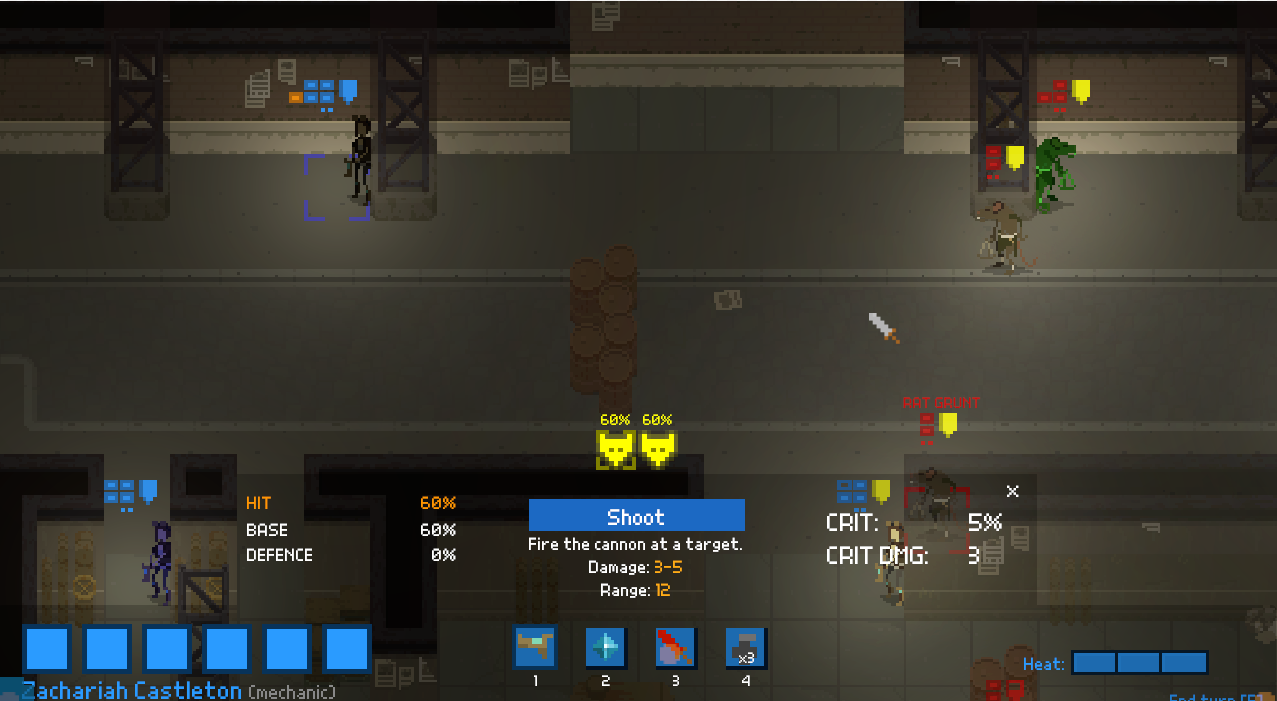 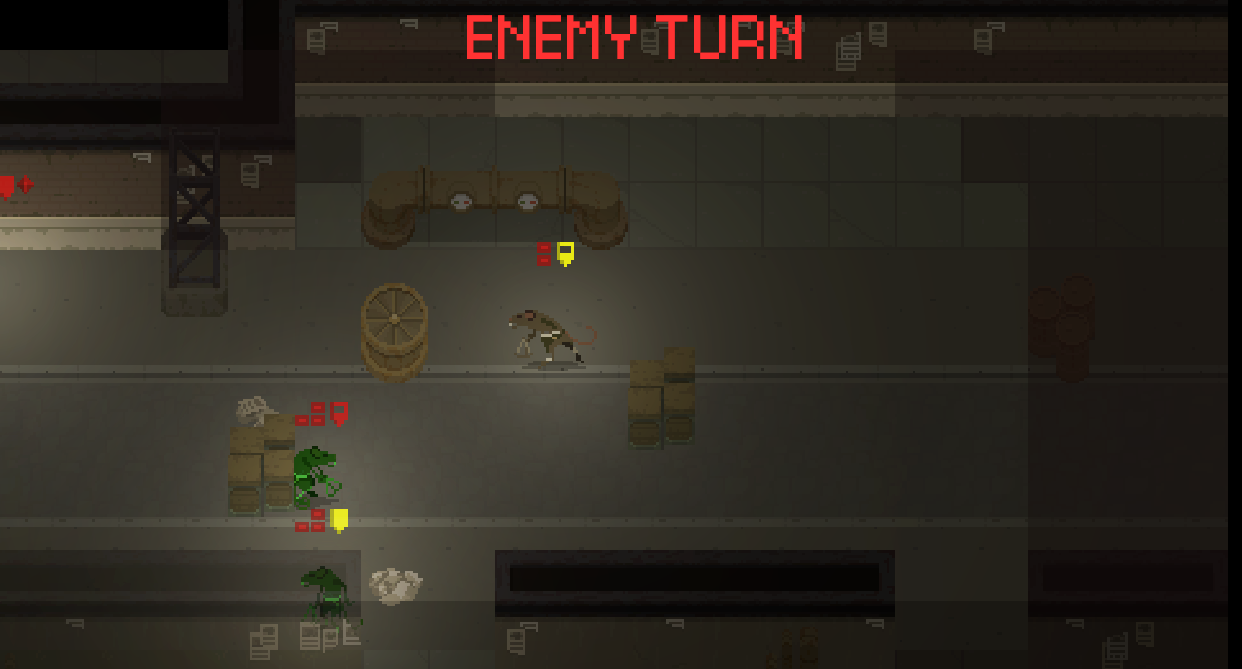 Thanks for that! I've updated the description then :)

Allright, I just released the final version! Basically just added some more animations, including the death animation - and made sure that the enemy corpses actually stay on the screen! :)

I won't have any more time to work in this on Sunday.

And I am looking forward to trying out all the games that you guys have submitted - looking at the ones already present, there is a lot of nice stuff out there that could be very inspiring and fun!

Days 3-6: you can see the progress here. Basically I'm pretty much done (simply running out out time) - just need to work on the graphics.

And here are the gameplay gifs:

Thanks! Yes, I mean the whole game will only have that combat system  :) There won't be any other level of gameplay, if that is what you're asking about. Anyway, see the entry below for more details.

I like the visuals! Simplistic, but feel so modern. I am also experimenting with two player characters idea, so I am especially interested in what you will be able to accomplish here.

Day 2 progress can be seen here.

And here a gameplay gif:

That is indeed a fine way to find yourself a theme. Looking forward to playing your game!

Hi - I've just posted progress after day 1 of the development. Read more about it here. Basically, the player now controls two characters instead of one.

Also, I've changed the graphics to something self-made.

Hello everyone! I hope you are as excited about the jam as I am!

During the jam I will be working on a remake of another jam-game I created some time ago. I will be posting my updates to my blog site, and will inform you of any updates here as well.

I hope you all have fun during the upcoming seven days, and I am looking forward to seeing some amazing roguelike stuff from you!

Thanks for the feedback! And indeed, I believe that the game is a little too difficult. But at least I managed to finally learn how to use Unity :)

Awesome idea for a game. Building a creature from the parts of killed enemies... such approach sure opens up new gameplay concepts!