Hi, this game was not made with pico8 it just uses that colour palette

Hi, it seems gmlive.gml still thinks this function takes 5 arguments instead of the new 3. When trying to use it and reloading the event, the following error shows in the log:

until fixed I will use live_function_add :)

I noticed certain struct variables don't show up in the auto-completion, and after some experimenting it seems like the missing variables are ones that are declared after a comment 🤔 Am on newest beta version. 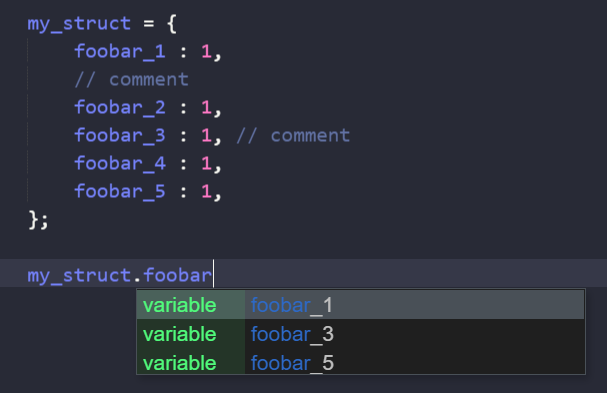 I think I broke the game by playing with a Wacom tablet, all the frustrating cursor movement stuff doens't work and I easily won :D

I just had this happen in the latest beta build, Nov 30.

Created a new sprite and changed an object's sprite index to that (from the GMS2 IDE), went back to gmedit and did CTRL+R, and suddenly sprite_index had become "[object Object]".

Edit: Just noticed it seems like a chunk of code from that object's create event also mysteriously disappeared at the same time 🤔

I finally updated from good old GMS 2.2.5 to the 2.3.1 stable today, so I updated to newest versions of GMEdit (Nov 23) and GMLive (1.0.37) as well. I noticed GMLive badges don't show up in the sidebar anymore, even when enabled in preferences?

Kingdom Hearts, which I was probably playing a ton of when making this 🙃

Good to know not being able to type can be fixed that easily, in hindsight I'm surprised I never tried clicking off and back on the window!

And yeah, I'd definitely prefer it creating the script in the root folder than not at all, feels less "punishing" and more similar to the GMS2 IDE as well (Alt+C creating a script in root)

If I don't pick a directory for scripts to be created in before trying to create a new script with Ctrl+N from within an object, I get a popup saying "Can't create a script next to this resource" (why not just default to the root script folder?), and then after dismissing the popup I can't type any code for some reason, until I restart GMEdit 🤔

"LOW-TECH (Ancient Techniques Only)", entirely optional, you can decide to use it or not

I made a little cart browser too, to hopefully spare their bandwidth lol. Can be downloaded for offline use. Likely adding the previous year's carts soon (including 2005-2007)

Edit: 2005-2019 have been added - Famicase Finder now has all the carts! Everything can be downloaded at once (100 MB) or each year individually.

THIS IS SO GOOD

Got 3/4 corners done, still stuck on south-west, but I am intent on finishing this and finding all secrets 😈

Definitely keeping this in mind for future projects (avoiding input combinations that might be awkward on certain devices, accepting any kind of device inputs simultaneously, and perhaps even accessibility options to make actions like this easier)

Ah that's a shame. It's all good though, thanks for giving it a go! :D

Hi! When I was making the game I thought the charge jump was fairly intuitive, but maybe it's not as well explained as it could be lol

A charge jump is performed by charging up your attack, aiming downwards, then firing off the charged attack. The huge recoil of the charged attack boosts you upwards, acting as a sort of second jump if you do it mid-air. It's this game's version of a double jump.

Here's a gif showing how to cross that gap, hope that helps.

Also, yeah, to find the first boss you need to do some backtracking, not super intuitive... I'd probably add some objective markers on the map screen or something if I ever update this game in the future .:)

Afaik it costs $100 to put a game on Steam. Can't justify that for a free game.

I'm working on a fix for that bug as well as some other ones, and some small new features (like speedrun timer). Hopefully out this week.

Truthfully, I started work on that update like a month ago, but ended up getting a little distracted by the new Pokémon games...😅

I heard of this happening to someone else a while ago, never figured out the cause. I'll look into it again when I have the time D:

Oh yeah, I see. Thankfully that doesn't softlock you in that specific room, but I can imagine it might in some other rooms...

Even in the newest version? 🤔 Please reply with further details on where and how.

I released my project for A Game By Its Cover 2019 this week:

Satan, the king of hell, really loves cake. One day he realises that he has no more, so he has to travel through hell in order to reach the cake shop, so he can get some more. His trident shoots electricity that can interact with mechanisms like generators, elevators and batteries, and it can transform enemies into cake.

The game is an action/puzzle platformer. It's about an hour long.

Yeah, that was a known issue unfortunately. I just pushed an update that (fingers crossed) fixes that.

Yeah, that softlock is a real pain. I've finally got time to work on this again today, fixing that is #1 priority right now.

Edit: Should be fixed now.