I agree. As an example, I still fondly remember this manual from when I got Invasion Force in 1979. It's a Star Trek styled game and the manual has a well-written story that in the telling explains everything that goes on in the game.

I like that you documented the change and showed it side by side.
I'd bet a lot of people if shown one way and then the other might say that it looks better, but wouldn't be able to state what was different.
So much work goes into subtle refinements on a game.

This is a much cleaner logo. I like it.

I'm glad I happened to know what the video size problem was. I suspect that's something to watch for now that that's a built-in Windows option that changes how games interact with the display.

The physics test I did to learn Godot where I had an "Uncontrollable Spaceship" was a lot more controllable than this contest entry.

As I have stated before - I lacked the time for fine-tuning the game jam entry and all the interactions of mass of the ship, amount of gravity, objects on the playfield, playfield design, etc made this MUCH less controllable than the physics test version.

Below is what I had before the Wowie Jam! (the version seen in the video I posted to Jonas's response) -- but I started with a blank slate for the jam because I have learned a lot more about Godot since then. Unfortunately some aspects of the tuning which were correct (by luck) in that version, I was unable to match in the game jam version

In this earlier version I didn't even have the hand grenades - if you play carefully and avoid letting yourself get turned upside down then everything is slow enough that you can calculate how to get yourself to bump into the things you need to go any direction you want to. (The ESC resets the sandbox if you do get stuck.)

I guess that's a bit of the negative part of a game jam -- when you know that you could have made it much better if you didn't need sleep so badly.

I will definitely watch for this as I develop the game further -- spending time tuning it so that the player is better able to control the ship is important. It should be uncontrollable, but not THAT uncontrollable.

Hi Mika - thanks for checking out my game. I'm sorry you're having a problem with it.

Here's what I think is happening because I had a similar problem showing it to my friend on his laptop:

My friend has a laptop with a 14" 1920x1080 display. Under Windows Settings - Display , it says "125% (Recommended)"
This makes the default text size large enough to read - especially as one gets older.
His screen had the same effect yours has -- the game is so magnified that the yellow lines that make the border of the playfield aren't visible. And the player's ships are off screen.

I was able to make the game playable on his laptop by going into the Windows Display Settings and changing it so that it is 100%.
This allowed the game to use the screen properly and be full screen.

After playing the game, I went back to his Display Setting and changed them back to 125% because without that the text is too unreadably tiny.

Let me know if this helps you. I've posted below a screenshot of my Windows Display Settings with the Scale and layout section circled. That's where I'd think the problem lies.

On my laptop (low power Pentium CPU and probably state-of-the-art a decade ago) the browser version ran at about 3 frames per second and was completely unplayable. I didn't have any way to playtest it on a better PC, so I figured it was better to just make it a software download. I also ran into problems trying to make a Godot-based game show as full screen when uploaded to itch.io. Those may be technical problems I can address in the future, but not within the limits of the game jam because I didn't have enough time to research them.

This is my display settings which has 100% as the recommended setting.
I think that's because I have a 1600x900 screen that's 17" so text on my screen is usually pretty readable. 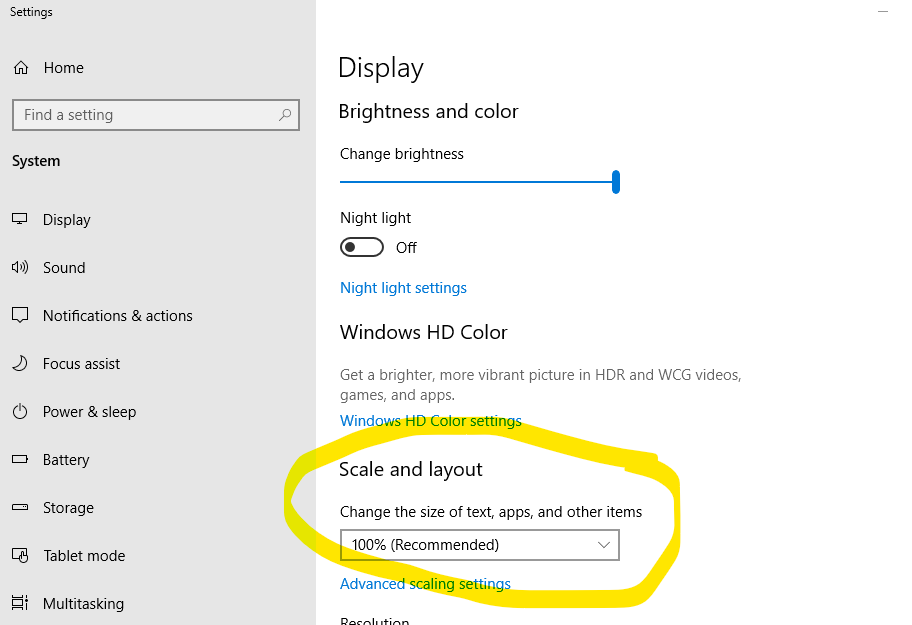 Thank you. The ships are too uncontrollable right now - but I think that's a matter of tuning some of the gravity/bounce/thrust factors and taking the time to make a playable game level. The first demo I made of this I had tuned better, but I started off fresh for the game jam since I didn't know Godot at all when I first came up with the idea. See also my reply to Jonas for more on the tuning.

There will be more levels - and they'll be much better set up to allow the player to use bouncing into objects to control their direction.

The round ships is an interesting idea for a workaround.

I think the big problem with controlling the ship  is that I didn't have time to tune all the parameters of gravity and thrust and such and the biggest thing is I didn't have time to make a good level since there were way too many things I had to learn how to do in order to make it all work.

I started coding this all fresh because I didn't know Godot at all when I made the first demo and there were all kinds of flaws in it. However, I did have the first demo tuned better and I had a better playfield design -- in the video I made for it you can see how the objects are placed so that the player can use them to turn themselves around and get where they want to go.  Just "hook" the "elbow" of the ship on a small square and use it to rotate the ship. Also the original demo everything seems to move slower, which gives the player more time to consider exactly when to thrust.

In the original one I made (in this video below) I didn't even have the hand-grenade thing because it was easier to carefully pilot and not get stuck. You can see me playing the SLASH ship and navigating all around the screen and then coming in for a nice landing.

I will be developing this game further and making better playfields and tuning it so that the player feels like their piloting decisions matter and they're not just flopping on the ground all the time.

Thank you for this game jam.
I made the demo in the video because I figured I'd learn Godot better if I tried to MAKE something rather than trying to learn how to use it by watching videos. But to finish the game jam entry I had to really keep DOING things so now I actually know that to add another object I create the node for the object, add a sprite to it, then add a collision node to it. I can do that rapidly now whereas before I had to reread the directions each time I wanted to add something. The game jam helped a lot with getting me to internalize all those steps.

I am making up my own answer in case anyone comes across this a-wonderin':

I found this reference:

You can create multiple accounts and give permission to one account to edit the details of the products of the other. All products will show up on your dashboard to edit and configure but to customers they will appear as being sold by different companies/people and will have their own subdomain.

So, if I understand correctly, I don't even have to login to other accounts if I'm the admin to those accounts from the "main" account. And even if I lose access to "sub" accounts, I should be able to change the password and everything, because, if I remember correctly, it says that an admin you add has all the privileges like the original account, even editing admins.

In that case, this is perfect for now, because I can manage all games/tools from one dashboard and still have separate URLs. Thanks again.

Based on the above, I'm going to create an account specifically for showing development progress of the game and discussing the design and implementation decisions. The finished game will be published in my main (eric81766) account.

I'm working on a game and I'd like to make all of the early development versions available so that I can discuss the changes I've made to the game in terms of programming and gameplay. Right now I'm making web-playable versions of the game since it is still in a rather simple state.

I'd like to keep all the versions available online for play so that I can point out how each simple demo has led towards finding "the 10 seconds of fun" that I want to then keep developing until it is finally a complete game.

Right now, I started with making each version a separate project, but this is looking to then give my account a whole lot of projects which are all really just snippets of work in progress.

Has anyone else done something like this and found a good way to organize it?

And so on, showing all my steps as a development journey with each step playable so that the reader can see how I made my decisions.

Ideally I think it should all be as one project with the different progressing versions in the devlog, but it looks to me like there can only be one HTML version of the game in the files which eliminates the ability to demo the progression.

I started out making separate projects for each step - but that's going to fill my account with projects that are really just pieces of a project.

I could host all the example steps on my own website - but that kinda cuts out all the benefits of using itch.io.

Does anyone have any suggestions as to how I could better implement this or if there is some feature I'm not aware of to allow me to show different versions of the same project from within the project?

I like the art style. I always loved the vector arcade machines.

This makes me want to create something that uses it: