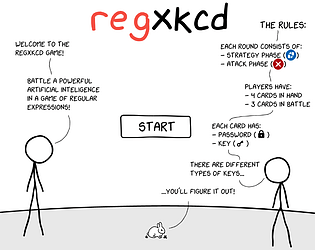 Link to xkcd comic / 'what if' article the game is based on
https://xkcd.com/208

Anything else you want players to know before they play?
Battle a powerful artificial intelligence in a game of regular expressions!

When in doubt, check out the awesome cheatsheet on regular expressions: http://www.pyregex.com/

Zaeche: the grumble of grouses2 years ago

I'm going to echo one of the sentiments I came across: this is a splendid way to practice regular expressions. Really! I was a bit rusty and it got me up to speed fairly quick (if you're interested, that's definitely an avenue you can persue with this).

The only really quick piece of feedback is regarding a tutorial:  it really does need one (nothing major, but quick and snappy one would suffice)

Took me a bit to get into the regex mindset, but a very fun game.

The rules are unclear.
But once you've gone past that, it's great! I'd love to see this game extended upon!

It took a while (the whole game really) to understand how to play this.  It's an interesting game, somewhat complex, with cards that are little tributes to xkcd.  It seems you're quite a fan of the comic.

I do agree with @Rainbow Serpent Labs's ideas: a tutorial and multiplayer would be great (perhaps after the jam is over?).  Sound and music would really make this game, as it's already quite well done, but needs more audial feedback and awesome tunes.

I got my butt kicked by the AI, but the screen still said "You Won" (even though it clearly displayed the scores [Me: -3, AI: 19]).  Also, the bun's words on the ending screen are some kind of haiku (syllables go 4-5-4)--was that intentional?  It's nice. :) Though I would have liked a restart button.

Thanks for feedback! Fixed "You Won" bug, now you can actually lose)

While not really feasible in the time frame of the jam, an interactive tutorial level would go a long way rather than just leaving it to the player to figure out. Also sound effects, and a bit of background music. Maybe a multiplayer mode to play friends. The highlighting was very helpful to figuring out what to do though and it is certainly a unique combat resolution mechanic.

Cool game! Good job! The bun was right: I did figure it out :P

I think I broke it at some point, though. At one point, my opponent couldn't attack any of my cards and took FOREVER to finish his attacking phase (check the image). 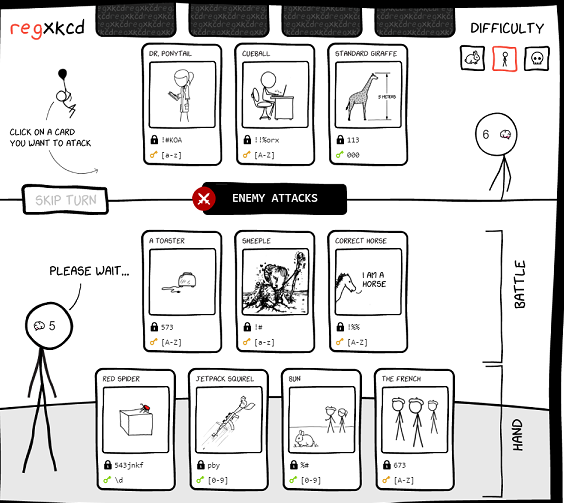 Thank you very much for reporting this! I believe it's fixed now  🤞🤞🤞 :)

Great game! The highlights on matches are a great help, and it actually makes it fun to get some practice with regex. I can imagine this working as a multiplayer against a friend, too.

Oh man, once I figured out how to play this I had a ton of fun! Really cool concept! The balance could be improved a bit, I found the computer and I were either always hitting each other for 3 points or 1. Some more detailed instructions and sound effects would go a long way.  With a bit more work, I think this game could stand on its own outside of the jam!