If Counterstrike was a text adventure
Submitted by dean36963 — 1 day, 15 hours before the deadline
Add to collection 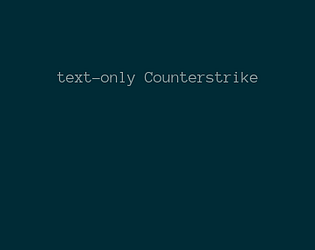 Link to xkcd comic / 'what if' article the game is based on
https://xkcd.com/91/

Please list any pre-made art/music/other assets that you used.
N/A

Anything else you want players to know before they play?
To play this game, you'll probably want to know your way around the classic dust2 map. You'll also want to know some valid things to type, which are: move, shoot, wait, defuse and plant.

Could you post a list of the commands the parser accepts? The only one I could figure out was "Camp"

you have to type them and it will open a list of location you can target the chosen action to.

Sorry about that! I posted the list on the game page but not on the submission page. The list is "move, shoot, wait, defuse and plant". Most of them have aliases (go = move).

I'll pop them on submission page too.

Not a problem, I'll give it another go tomorrow.

Had some dependency issues running it on linux:

Oh dear, that's a bit embarassing as I run linux! I must have compiled with different library version. I compiled it up as I thought it would be easier to distribute, but perhaps it's just easier if I give out the source (excuse the mess!).

I've added the source to github and and all you should need to run is "python3 Main.py". I've added this link onto the game page as well.

I enjoyed this! :) It's quite an interesting premise to begin with, and you certainly execute it reasonably well.  I like the little simplifications you made, like making locations into a typeable number.  Coming from a person who's never played Counter Strike, this was a nice taste of the experience with an interesting flavor of parser text.

However, I have quite a few problems with how that parser text was executed.  I'm an interactive fiction creator, and have played my fair share of parser games these last few years.  This game lacks quite a few basic parser features--mainly "look", which was rendered invalid and gave me nothing when I typed it.

Also, one of the best things of parser is the ability to input simple commands and receive description in return.  Since the game almost completely counts on the player having played Counter Strike's dust2 map, there is no description for a new player--therefore, I had no real sense of the space I navigated.  Giving a sense of space with text is absolutely crucial for a parser, and this game did not have that.

Another problem with counting on the player already knowing about the dust2 map: you assume the player knows and understands the game itself, both its rules and its goals.  I knew before playing that Counter Strike is a competitive FPS where you (maybe?) have to take out the other team, but the player unaware of these details is left by the wayside (what of the player who doesn't even know CS is a shooter?).  And since I thought I had to take out the other team, I was really confused when a bomb got thrown into the mix for some reason; when I had the bomb, I ran around randomly until (somehow?) I put it down and the countdown started, but I still don't know what triggered this.  You completely count on a player knowing Counter Strike's dust2 map without helping a new player who would be unaware of those things, both basic Counter Strike knowledge and FPS basics.

So, this was alright.  It's an ok parser that comes from someone who clearly knows their Counter Strike.  It somewhat interprets the original comic well, but the original comic also called back to old parsers (with the grue) that you did not use design aspects of in creating this (what did you use to create this, btw?).  I would love to play an updated version of this after the comp.  Nice job!

Thanks for taking the time to play, and thanks for the review! It's comments like this that make me very glad to have participarted in game jams!

This game is written in Python.

I must admit I probably spent more time developing this game than I have previously played text adventures (and it's certainly been a while!), so that might explain why it's lacking some of things you'd normally find in a text adventure.
Perhaps my new year's resolution will be to play some classic text adventure games!

I didn't personally want to make this, but man I was really hoping someone would.