Trick-or-treat in VR as a satisfying sportgame, played inside a pumpkin squash court in the year 3000.
Submitted by andyman404 (@andyman404) — 1 hour, 29 minutes before the deadline
Add to collection 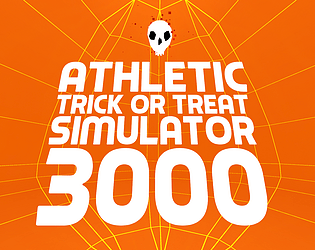 Super unique, this game has so much polish and charm! I really liked the "hold and yell to start", I'm glad I didn't have to actually shout into my mic haha!

I can see you put a lot of work into this one, I'm super impressed

Thanks! It's funny that those interactions worked the way they did: I made the "hold and yell to start", "swing arms frantically to proceed", "raise arms above head for rematch"  interactions because I was running low on time and energy, and didn't want to have to figure out how to do fancy visual UI stuff like springy pressable buttons, or deal with laser pointer UI. Just testing for hand position or velocity and accumulating the test result to a timer ended up being a lot easier. Ah the magic of game jams!

A build for the Oculus Quest is now available. It is identical to the existing game jam build.

My favorite entry! A little frustrating because smacking the skull sometimes makes it go back on your court, but still an awesome arcade experience.

Thanks! Yes that haunted skull ball has a very annoying mind of its own sometimes! It needs to be taught a lesson with more hitting.

Its a bit tricky to aim / predict the trajectory , but great art style and awesome idea
( bonus points for making it less then 50mb - how did you do that is beyond me )

Thanks for playing! One might want to imagine that the skull ball is haunted and sometimes has a mind of its own, but there's actually an interesting story behind the quirky aim / trajectory...

I found that Unity's physics is kind of quirky when it comes to bounces and fast moving paddles that sometimes pass halfway though the ball before registering a collision, making them go off in a somewhat random direction if you hit it quickly. Currently, the tombstone paddles work best when you hold them still and let the ball bounce into them, rather than swatting at the ball with them.  Without any autoassist on, it way too hard to aim the ball at a target on the other side of the court, as I found earlier on in development.

To try to compensate for the Unity physics quirkiness, the skull/ball has an  "autoassist" feature so when you hit it, it will kinda swerve toward a door it is most nearest to heading in the direction of in front of it. Or if it bounces off a wall or a door, it will try to aim for the player on the other side.

But still, luck and quirky Unity physics  plays a huge factor in the Unity physics bounces for both the human and AI; so much so that the AI doesn't bother to even try to aim at things. After the jam, I might add an option that turns autoassist off entirely.

If I were to try making something like this again, I'd probably make each tombstone paddle into its own separate rigidbody with continuous collision detection too. Right now, they are just a child of the XR Rig's kinematic rigid body, and that could be the problem, since it's really just their transforms that are moving, rather than real rigidbody movement.

The small size might be because I compiled it using IL2CPP rather than Mono, and the only texture used was the subtle texture of the pumpkin dome's walls.