Fight the Quetzalcoatl, but don't fall through the floor!
Submitted by CG Smoothie — 9 hours, 57 minutes before the deadline
Add to collection 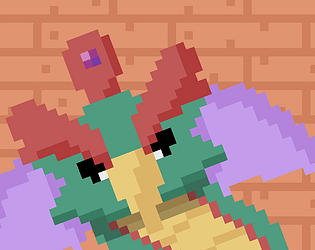 How does your game apply the limitation (and optionally, the theme)?
You Fight an Aztec Monster, a Quetzalcoatl (boss) in a Crumbling Dungeon (on the edge)

What main engine/tool/language did you use to construct the game?
Unity

It may be a little scuffed, but it still holds the key to a pretty cool game. I actually don't mind the controls. Moving on a tile based system makes it a bit easier to plan your moves, which as time goes on, would be very helpful when you've lost a lot of the platform. Maybe some of the bosses attacks could damage/remove some tiles? (If he already has one, I didn't see it. He was dead long before). I'm curious to see what comes of the post-jam update

The art is good and the concept is unique, but the controls feel quite bad to control and I experienced a bug where I fell into a hole when I started a new game after dying.

Hope this game improves after the jam!

OK, keeping in mind this is a scuffed version:

The boss fight is super easy. Like, far too easy. I consistently defeat it without moving at all, and it doesn't feel like much of a challenge. But the idea of fighting a boss on a crumbling dungeon floor is good.

At first I thought the absence of sound effects wasn't a big deal, until I realized the music is rather short and doesn't loop. This would be a major improvement.

I really dig the visual style, though you might want to make the boss and its bullets stand out a little more, with a black border for instance. The game is readable as such, but a little more contrast wouldn't hurt.

Dang, I can't believe i forgot to loop the music🤦‍♂️

Yeah I plan on adding more stuff once the voting's over

This version is very scuffed, I'm going to be updating after the rating Period