Build your very own Satellite
Submitted by AeliosZero
Add to collection 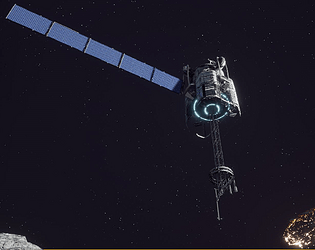 Did you us any pre-existing assets in this game? If so which ones?
Sounds from Freesound and UE4 learn content, base Earth textures from NASA, other 3D models from Sketchfab. Materials, environment and code were made by myself.

Visually it looked great, controls were a bit hard to grasp, almost felt like x,y,z were backwards. and the only real grip i had was the Laser noise was very grinding on my ears, maybe it was just too loud. But all in all Top notch Job .

the game look in graphics wise awesome. but I miss some gameplay.  All i do is destroying asteroids and use them to build up my base.

But there is also some food and energy level that aren't being used. I hope I can see more of the development of this concept and see what you have made after this jam is over.

But it looks good

Your game is absolutely beautiful, as for the gameplay I wasn't sure what I was doing/shooting at beyond the little blue sattelite type things. I tried doing some crafting (after I eventually found it) and it didn't seem to do anything?  Also as I moved around the laser slowly disappeared until I couldn't see it anymore lol.  So there's a few bugs and it could really benefit from a tutorial or at least some instructions on what to do. Good effort though!

Oh and when you're building a UE4 game, if it's not VR turn off the SteamVR plugin, cos it opens SteamVR on peoples systems who have VR headsets and it's annoying lol

Thanks! I am working on resolving these issues! Also thanks for the reminder on the whole steam VR thing