Craft Foods in a Simulated Kitchen
Submitted by Hungry Joe — 11 hours, 39 minutes before the deadline
Add to collection 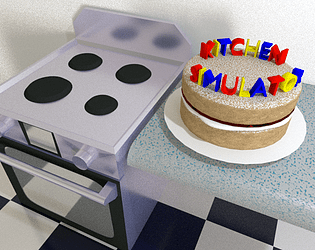 I've always sucked at these kinda games ( I always forget the commands or misspell them haha) but I do like where this game is going. I think putting the recipes and the commands in the game description might help quite a bit so you don't have to keep typing 'help' or scrolling up. Good job with this though, I hope you decide to keep working on it!

I tried the first two recipes, but I think I messed up the second one. X3 Learning nonstandard IF commands is a bit tricky, and I kept having to re-check the recipes after they scrolled off the screen. But, it's a nice first attempt, especially being made from scratch. It reminds me of Hadean Lands, which is an IF game you might like to check out.

The "look oven" thing was a pretty bad oversight. Honestly, I'm happy to hear someone managed to work through just one of the recipes.

I applaud writing IF from what I assume was scratch, nice!

Unfortunately I can't simply take saucepan, and take saucepan from cupboard informs me that there is no cupboard on the counter, which has me a bit stuck.

Im kind of aware my choice of command names is pretty cryptic,  there was absolutely 0 playtesting involved. Moving items around the room uses the move command, take is for getting contents out of a container.

In hindsight I regret the decision that you need to move items to the counter to use them anyway, I don't think it adds anything.

Ahh, okay, I'll have to give it another try then.  My brain has been poisoned a lot by the standard mechanics of Inform games  :)

Let me know how you get on; I suspect that there's a lot "non-standard" about my command names :-(

Also, I'm curious what IF means in this context?

Thanks, I was miles out

Submitted
introduction for a game
LikeReply
Hungry JoeDeveloper4 years ago(+1)

i couldent make it work :(

Try typing help in the text box, and pressing enter