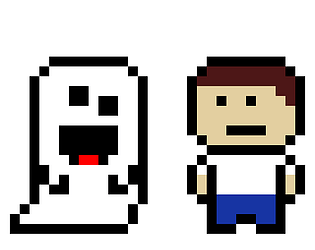 The game is a bit generic, but nice job writing it in vanilla JS! I would just recommend you not to use the up arrow to jump in a browser game, because it scrolls up on the page. Nice art and music as well.

Visuals are cute. Also i love the movement. Game runs pretty smooth. Nice! Also i would appreciate it if you could play and rate my game.

Submitted
Not Spooky At All
LikeReply
Rykuzu StudiosSubmitted167 days ago

For your first game, it wasn't all that bad to be honest. I love the custom art and the catch soundtrack you made for the game, but the gameplay, in my opinion needed a lot of work. Here are the problems I found:

Sorry if it seems like I'm judging the game. I just want to give my feedback and opinion of how I feel the game could be improved because I enjoyed the first portion of it, but after a few levels, it started getting extremely difficult. The idea was nice though!

Great game, couldn't get to the end, but had a blast playing it. Great work!

Submitted
Awaken From A Coma
LikeReply
Coreylr197Submitted167 days ago (1 edit)

This was great! Couldn't make it to the end, but spent a lot of time trying to get there, which was fun & frustrating! Great job!

I'd really appreciate if you checked out my game as well! :)

I love the art style but I guess I overhyped myself of how spooky this game was gonna be so that's on me. Overall, it is a great game with a good amount of levels.