A small collection of found MS-DOS games by the developer VISICNS.
Submitted by Vacant Mannequin
Add to collection 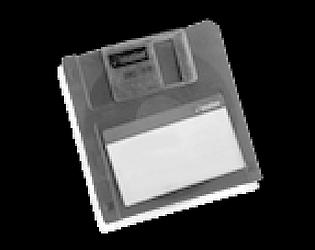 In Dreams builds itself out of the parts of old games that we read as unintentional, unhelpful, oversights, limits of a medium, poor design choices, and subsequently (half-)forget. Your game puts these parts front and centre, and uses them to great effect to create horror.

There's a particular kind of loss of control you feel from playing old PC games, particularly old shareware games of dubious provenance. Most are janky and unplayable, unpredictable. Some are less wholesome than they first appear. The audio and visual aspects of old DOS games are inherently uncanny and offputting, especially when done “badly”. In Dreams uses this feeling of wrongness to unsettle. It uses mechanics that take control away from the player and uses them to increase the feeling of horror. Frantically pixel searching is like being lost in a forest. Checking and re-checking the same clickboxes in the hope that they will reveal a way to safety does evoke the feeling of panic we would feel when almost alone in a remote place. Even the options on the right-click menu unsettle a little in their lack of function/context, and unsettle even more when they are taken away. Agree that the click-mashing can make you miss certain bits, but it's a game that still plays well second time round and BLEEDS atmosphere.

A surreal, frightening experience. I enjoyed playing this immensely!

I'm so lost. But I'm fairly certain I've been eaten by a crackhead. So that's a bummer.

Awesome concept. At first, I was thoroughly confused but quickly became engrossed. You captured the dos vibe very well. The lack of audio and direction of gameplay were the scariest things (in a good way!). The simplistic visuals actually had me glued to the screen waiting for the next set of pixels to change. Nice work!

As far as concepts for experimental games go this is fantastic. I love the found/lost media genre and this captures that atmosphere in the same way with its framing device and exposition. I like the effort that went into crafting the story of VISICNS. The experiences themselves emulate 80s computer graphics fairly well. The sound is a noise/experimental buzz that fits well with the mood of the game.

As far as feedback I'd say the biggest thing is the 'sweet spot' clicking for progression made it very tempting to mash the mouse everywhere trying to move on. This created some issues as I'd accidentally click through a little of the dialogue which broke the immersion of the experience.

Props to creating something highly original and atmospheric for the jam. I think that devoting the same mood and worldbuilding to a larger project could morph into something really special.

Thanks for submitting In-Dreams to the SCREAM MACHINE jam!