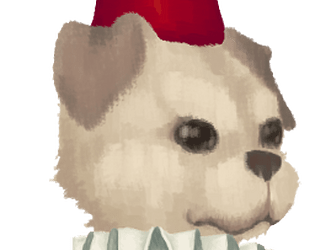 Quirky and surreal. Love the art direction and variety of puzzles, though I had to check the walkthrough for a handful of them. The audio set the tone well with the them very well. Everything combined perfectly to set the mood. An option to back out of puzzles and try again later would be welcome, as would some more in depth narrative because it sets up an intriguing premise. Nice combined effort.

Thanks for the review and praise! There is an option to back out of puzzles (there's a button in the top right corner), but a few people have said it isn't very clear. We'll fix this post jam! Also, we had a couple endings we wanted to go more in-depth on but didn't have time. Hopefully we can get around to those post-jam as well! Again, thanks and I'm still excited to check out Charlamagne!

The puzzles were very fun, the atmosphere, dark, oppressing and surreal, and the music, very catchy. Too bad the ending was so abrupt and didn't really explain anything.  Nevertheless, it was an excellent experience.

Unfortunately the narrative/world building was the first thing to fly out the window when it came to the time crunch. We did have stuff planned but just couldn't get it implemented. But I'm glad you enjoyed what we did get out!

This game has a little of everything in the adventure game genre - 'room escape' mechanics, puzzles, an inventory, and some choices. It's very well fleshed out and reflects the effort and planning that went into the game.  It reminds me a lot of Flash adventure games that used to be very popular.

The visuals are perfect for the type of game and are really consistent. Little tricks like a foreground silhouette, a shaking effect to simulate rumbling, and some of the layering going on with the puzzles is really impressive. I've got to say the art made the game feel like a very polished adventure game.

I made some of the music for this so I can't really comment on the atmosphere and setting without tooting my own horn. But I'll say that think it's cool how you layered the screams over each other and layered the stems of the music to become progressively denser as the game went on.

The puzzles are really the strength of the game. They're varied and draw from a lot of the classic adventure puzzle types. Some of the clues are interlinked, and there's some item combination to tie it together. All of the puzzles were hard enough to be interesting but not so hard to be infuriating.

I know this is just probably down to time constraints but some feedback could be that the ending(s) was a bit premature. In addition, some of the elements, such as the animals, the dungeon premise, and the player, could have had a little more context to support what exactly the setting was.

Dog-gone it, I enjoyed playing this game, and I don't have a bone to pick with it. Great job!

Thanks for submitting Vacate to the SCREAM MACHINE jam!