A young boy is stuck at home and want to build a robot.
Submitted by Ja2b — 26 minutes, 48 seconds before the deadline
Add to collection 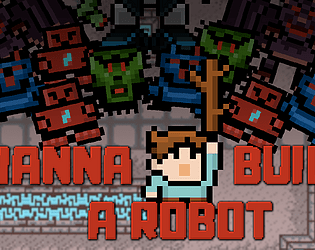 Okay this game slays. It's a nice throwback to Zelda-esque RPGs and boasts a lot of the same aesthetics and mechanics. There's a lot of variety with enemies and areas, and I think that it's nice to see a more action-focused game in the jam sometimes. As others have said there's some things that can be polished but the core mechanics are fun and that's really the essence of what makes a good game. I hope you get the time to continue developing this and flesh out these great ideas!

Thanks for submitting I Wanna Build A Robot to the SCREAM MACHINE jam!

I really liked the weapon system and having two weapons. The enemies were fairly tough sometimes and the controls work good. The flamethrower attack almost killed me, and I died a few times before I got the hang of it. The music is nicely balanced and I like the cute / dungeon graphics. :)

This was a lot of fun! I was totally not expecting a boss fight, that was a cool addition. Had the 3rd world been like the first two I would've gotten tired of the same set of enemies, so hitting a fresh challenge was a nice way to wrap things up. Once the robot said "FOREVER" I was stuck wandering my house, I wasn't sure if I was missing something, that was intentional, or if that was supposed to be the end and it just didn't...end. But regardless, thanks for the refreshing change of pace!

Yup, we didn't had the time to make the game end after the cutscene... We will do it in the future.
Thanks for the feedback !

That was cool.  Room 2 was a bitch to get through.  Really liked the art.  Especially the pick up animation was really cool.  I would def recommend this game.

Please take the following as constructive and positive feedback.  You should have nerfed the ghost attack distance.  They would attack from different rooms before you could actually see them.  Also you need to put the controls in your pause menu.  Had to exit and go back to your game page to see how to throw stones.  The stone needs to be destroyed after you collect it, like the stick.  Thought I would have to return to the spot for ammo.  Gun turrets should start shooting as soon as they become visible, else you can just pick them off from a distance.  The end boss was wonderful, and appreciated how the game turned into a shoot an up at the end.  The other battles became bland very  quickly as all the enemies felt too similar.  This could also have been nice with a turn-based battle system.  Lastly after I completed the robot, it thanked me and then the game ended without a prompt to let me know it was over.  Once completed I could no longer open the pause menu, so I had no way to quit out of the program?

Well done on this entry.  It was great!!!

Thanks for your feedback !

We still have a lot of adjustments to make, and the controls were in a cutscene that we didn't find how to put it in the game :D.

I don't think we will make it turn-based, but we will change the behaviour of the differents ennemies for sure. And we will fix the ending too :D

A cute little game, wish I moved faster though.

Thanks! Yeah that's something that we are definitely going to fix :)