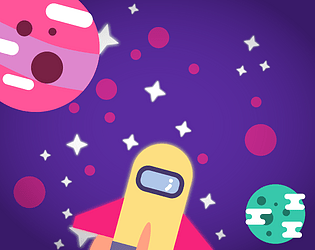 The gameplay was interesting although basic, with no real innovation. The comets come out of nowhere and are very hard to dodge. The tank controls would work if it weren't for the fact that the velocity made no physical sense. If you turned left, the forward momentum also turned left, which meant that you were going forward even though you turned around. It doesn't sound all that bad, but it feels terrible. There's also the fact that I couldn't harvest planets even though I was supposed to be able to, which is a rather major bug because I couldn't earn points. My rating: 3.5 (rounded to 4) stars.

It fits the theme. My rating: 5 stars.

Holy cow, the graphics are amazing! Seriously, great job! The style and usage is consistent, and it feels very well made! I am left wondering a little though, because I know that Kenney assets exist, and this art looks very much like that.... But I'm not here to point fingers. My rating: 5 stars.

The audio was pretty lacking, the biggest factor being the total absence of music. However, the existing sound effects were somewhat decent. My rating: 2.5 (rounded to 3) stars.

Overall, this game looks really good, but the lack of good audio to back it up and the very untuned controls (not to mention the big, fatal bug) really beg for fixing. My rating: 4 stars.

Thanks for the feedback! Regarding the physics:

"the velocity made no physical sense" and "If you turned left, the forward momentum also turned left, which meant that you were going forward even though you turned around" are kinda of contradictory statements, don't you think? If the spaceship keep moving onward when you turned left, that means that there are steering forces and inertia going on, while the opposite would be totally non physically accurate :P. But nonetheless it's a stylized physics, right? Although I do agree that it feels bad, especially when you are trying to shoot on comets and always lose that target because of the inertia.

Thanks for the compliments on graphics! The style is called flat design, and was inspired mostly by Kurzgesagt,, although I use this style broadly in my games since the first of them, Moon Cheeser. Most of the art reference came from this image: Although I know and really admire Kenney's assets as well!

Regarding sound, yeah, I actually think we don't even deserve anything above 1 star, and this star being granted only due to the try of adding sound :P

About the gameplay, are you sure you couldn't harvest the planets? It is an automatic action which happens as long as you stand within a planet boundaries, and by the way you can't harvest the same planet twice. We did a check on this report, and at least this is working as it should :/

Well, if the problem persists, please tell us, it is indeed a major bug, I'd say even a blocker if this isn't working.

Anyway, thanks a lot for taking the time for giving such a good feedback, I really appreciate this <3

I meant that I continued forward in the direction that I turned to face, not the direction I was facing beforehand. Sorry, I worded that post terribly. You're supposed to drift off in a direction due to momentum and that would be good. Constantly moving in the direction you are facing, however, makes no sense, and just feels bad. Generally, you really don't want to use stylized physics, unless you're messing with the amount of force (such as adding a ton of gravity and jump force in a platformer to keep things fun, rather than having it realistic).

the Aestethetics are incredible, and fit's the theme well, but i thin it lacked some music.

Thanks for the feedback! <3

Yeah...sound was a major issue in this game :/